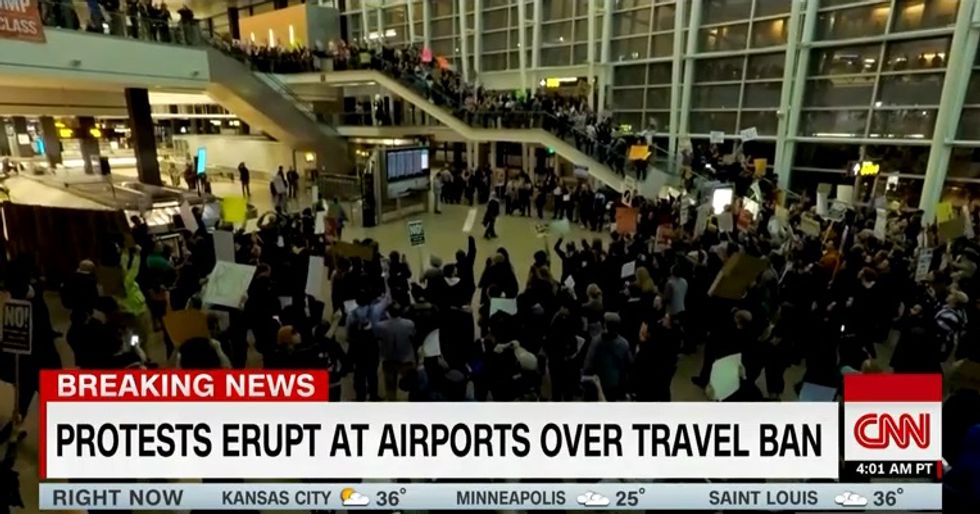 So here's the good news for your Sunday morning: Federal judges have put part of President ShitFerBrains's immigration ban on hold until the order can be given a full review in court -- and more lawsuits are on the way against the order. The situation is still developing in airports and courtrooms across the country, but the most important thing is that, so far, real American law and order is prevailing against this paranoid, un-American order. Here's where things stand at the moment:

The protests started not long after the first travelers started being affected by the ban: people whose visas and other paperwork were all in order but had the bad timing to be Flying While Foreign at the moment Trump signed the executive order. As of Saturday evening, the Department of Homeland Security said that 109 people had been refused entry into the country. It's not clear how many were actually sent back before the judicial order went into effect, or how many remain in detention at airports.

In Brooklyn Saturday, U.S. District Court Judge Ann Donnelly put deportations on hold for those who were currently stuck in airports nationwide; shortly afterward, in Alexandria, Virginia, U.S. District Judge Leonie Brinkema issued another order keeping green-card holders from being deported from Dulles International and ordered that the detained travelers be given access to lawyers. Yes, there had to be a lawsuit to allow people to see lawyers. In the USA. Imagine that.

Or maybe it'll take a lawsuit and a contempt order:

The court orders -- so far -- put the Trump executive order on hold only for people who've made it to the U.S. and are still here. They won't help travelers stuck at foreign airports, or the two Syrian families sent back to Qatar after landing in Philadelphia Saturday -- they weren't refugees; instead, they'd applied to immigrate in 2003, have family here, were approved to immigrate in 2015, and had already been approved for green cards. USA! USA! USA! We feel so much safer now.

The Department of Homeland Security is definitely reflecting the new management; it issued a statement early Sunday morning downplaying the travel ban, since "less than one percent" of international travelers to the U.S. are being "inconvenienced." Inconvenienced, being treated like criminals even though their paperwork was all in order, whatevs.

Translation: Welcome to the New Cruelty. In what has to be the most idiotic part of the travel restrictions -- oh, but it's so hard to pick! -- the ban on travel even applies to permanent U.S. residents who were out of the country when Trump signed the order, although DHS very generously will consider their return on a case by case basis. Aren't we just the best? How stupid is the enforcement of this incredibly stupid order? Among those held at LAX is an Iranian woman who's had a green card for five years, and who is scheduled to be sworn in as a citizen in two weeks. Or not. She's Iranian! Scary and might be a terrorist!

Sad King Donnie offered this important comment on the situation:

Well, let's see, there's worldwide chaos thanks to what Lawfare blogger Benjamin Wittes calls an executive order whose "malevolence [...] is mitigated chiefly—and perhaps only—by the astonishing incompetence of its drafting and construction." So Trump's right: we should look at worldwide effects of this mess he's created.

But let's talk resistance: spontaneous protests which sprung up at international terminals of airports from JFK in New York to LAX in California, and at major airports all across the country. The protests at JFK grew during the day -- mostly due to Wonkette telling New Yorkers to get their asses to the airport, we're pretty sure -- and by evening included what looked to be thousands of people, joined by union cab drivers who staged a one-hour work stoppage in solidarity with the detainees and the protesters. More protests are planned for today at LAX,Dallas-Fort Worth, JFK, and elsewhere -- check your local social media and get your ass out to the airports, people.

Who's on the right side of this? That lady who couldn't be trusted with the presidency because of emails, for one:

At Dulles International Saturday, protesters were joined by Virginia Gov. Terry McAuliffe, who called Trump's executive order "antithetical to the values that make America great," and added that it "will make our country less safe." The Archbishop of Detroit sent a letter of support to the Imams Council of Michigan pledging to stand with the Muslim community. In Chicago, at least five city aldermen joined protesters at O'Hare International. In Atlanta, Certified Civil Rights Badass John Lewis couldn't get a straight answer from an immigration official, and was not going to stand for any stonewalling. Literally:

You want an instant sit-in? Show John Lewis some injustice.

Trump's immigration idiocy is facing worldwide resistance, too: The mayor of Berlin has sent Donald Trump a message to remind him that walls are in general a bad thing. When Trump phoned German president Angela Merkel, her office says, she took the opportunity to explain to him what the Geneva Convention is, how it works, and why we have it. And not surprisingly, Canadian Prime Minister Justin Trudeau Tweeted Saturday -- in English and in French -- a reminder that Canada is governed by a grownup:

What's next? More resistance. On everything, not just immigration. And if you worry the Youngs don't get it, here's a recent high school graduate who isn't especially pleased with the guy who recently moved into her former home:

Yep, that's Malia Obama, who took a break from her family's Caribbean vacation to go to a protest against the Dakota Access Pipeline being held during the Sundance Film Festival.

And finally, some good news from an actual Wonker who came to our NYC Drinky Thing: Pieter Van Tol posts to Facebook that his law firm and attorneys from Davis Polk this morning secured the release of Sepideh Seyedzadeh Sabounchi.

In a personal note to your editrix, he lawsplained for us that yes, the Department of Homeland Security seems to be telling federal judges to fuck themselves, they are still detaining people, and they are still refusing to let them confer with lawyers ... and that the next step is contempt orders to fine and then jail them -- not the Customs and Border Patrol agents on the front lines (who refuse to give their names and are, he says, literally quaking in fear), but their bosses.

Look for the helpers. If you can't find one, be one.

Programming Note: No Dear ShitFerBrains this morning, kids. We've got a whole ShitFerBrains administration to deal with. We'll bring you a fine selection of Derp during the week, maybe, unless things remain too insane.