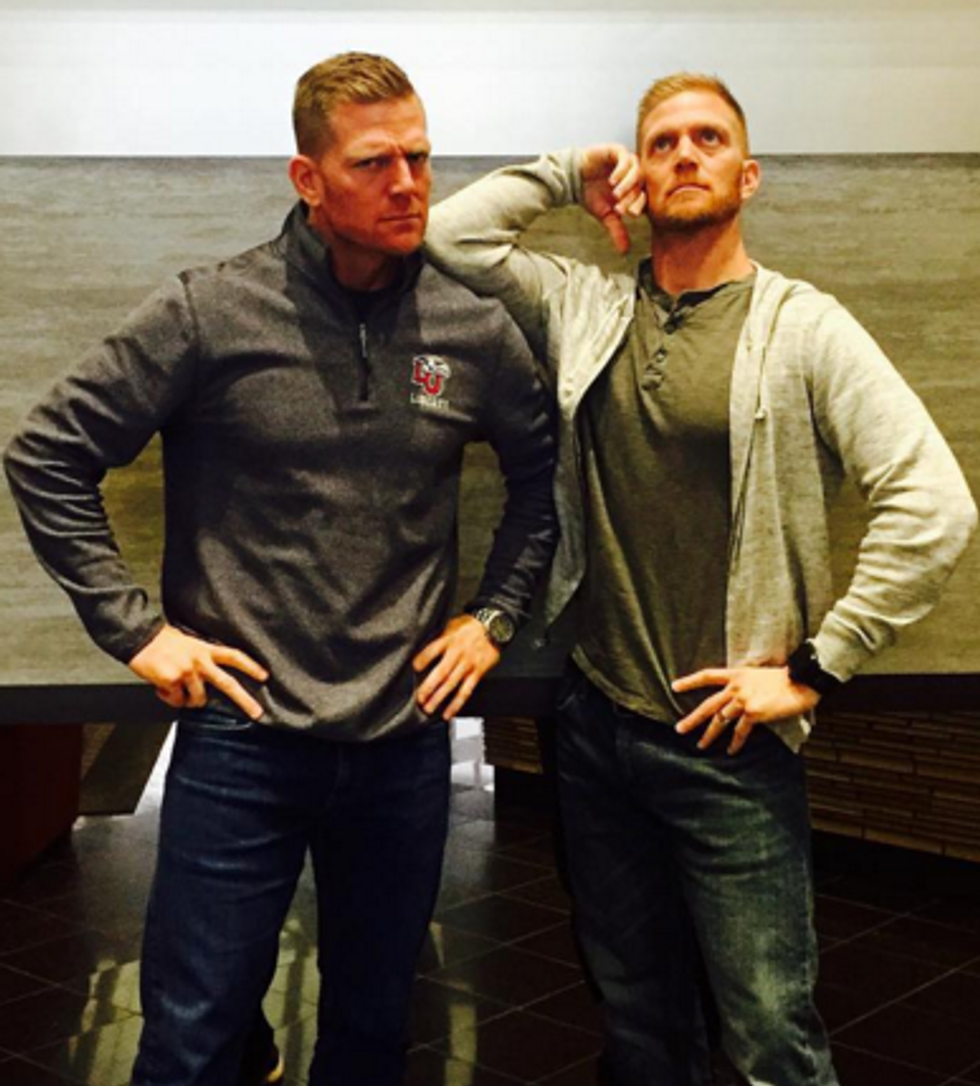 Oh, it is tough, so tough, and hard, so rock hard, when you are a pair of strapping, blond identical twins who spend your lives looking extremely homoerotic while trying to feebly fight the gay agenda. Yes, we are talking about Jason and David Benham, those twin bros who one time were going to get a show on HGTV but they didn't because they're fucking bigots.

And they won, for now! But they know the fight is not over, because the sexy gay agenda-doing sodomites of North Carolina and all the other states are outside their door, WITH BONERS. The Benham brothers rightfully understand that in this retelling of the Sodom and Gomorrah story, they are the beautiful, glistening man angels with pecs of steel and perfectly sculpted buttocks -- in short they can tell the gays outside wanna fuck their Aryan A-Holes.

The boys wrote this slash fiction together (because they are twinsies!) on the WorldNetDaily internet gay erotica archive:

Get it? The "vine" is a poison dick and the "prey in America" is Jason and David Benham, and all their pals. What will happen next??? Will the vine gay-murder them, or will the boys squeeze it in a back-and-forth motion until it bursts?

Here are the sexxxiest sentences in the Benham Boys' gay Bible story article:

This is the pattern of the sexual revolution’s mob, surrounding its prey, forcing its will on all who stand in the way.

They're talking about how eeeevil corporations are doing the gay agenda's bidding, by reacting poorly when states and municipalities pass anti-gay laws, because treating people equally is better for their bottom line than sucking fundie Christian dick.

OR ARE THEY TALKING ABOUT THE MOB THAT'S ABOUT TO SEX THEM?

“Before they lay down, the men of the city, the men of Sodom, surrounded the house, both young and old, all the people from every quarter; and they called out to Lot and said to him, ‘Where are the men who came to you tonight? Bring them out to us that we may have relations with them'” (19:4-5).

NSFW Bible alert, bros! As we said, in this version of Bible, the Benhams are the angels and the men surrounding the house are, we dunno, Paypal, which just canceled plans for an expansion in North Carolina due to the new law. Don't get assfucked too hard by Paypal, boys!

Today, the sexual revolution of Sodom has pervaded every sphere of society, capturing both young and old. And anyone standing in the way will be surrounded by an angry mob demanding participation.

Oh no, they are going to make the Benham Bros "participate"? Do they have to take their fashionable matching jeans off? This is getting hot!

“So they pressed hard against Lot and came near to break the door” (19:9b).

The “vine” of Sodom in a nation forces participation against the will of the people. It refuses to be told, “No.”

The gays and their minions (the corporations) are pressing and pressing hard against Lot, and also Jason 'n' David, and there is a vine (penis) and it is like a whoa penis and not just a regular penis. Also, that is three quotes now where they talk about being "forced" to have sex by hordes of men, isn't it? We're sensing a bit of an obsession.

Anyway, the boys explain that the Vine Of Sodom still exists, and it's dicking Good Christian Gentlemen like themselves down continually, it just ... keeps ... RAMMING! Now it's also "taking root" though:

All across Europe and now throughout America the vine has taken root and is surrounding its prey, and nothing short of a miracle will stop its deadly poison.

The fertile soil that makes the “vine of Sodom” grow in a nation ...

... is the Benham Brothers' butts?

Anyway, they conclude by saying that nobody can stop the Sodom Vine Gay Agenda Penis thing, not laws, not even fire and brimstone. Only Jesus can do that because He has "the power to defeat the real root" of it and the jokes are only going to get more blasphemous from here so Seacrest Out.