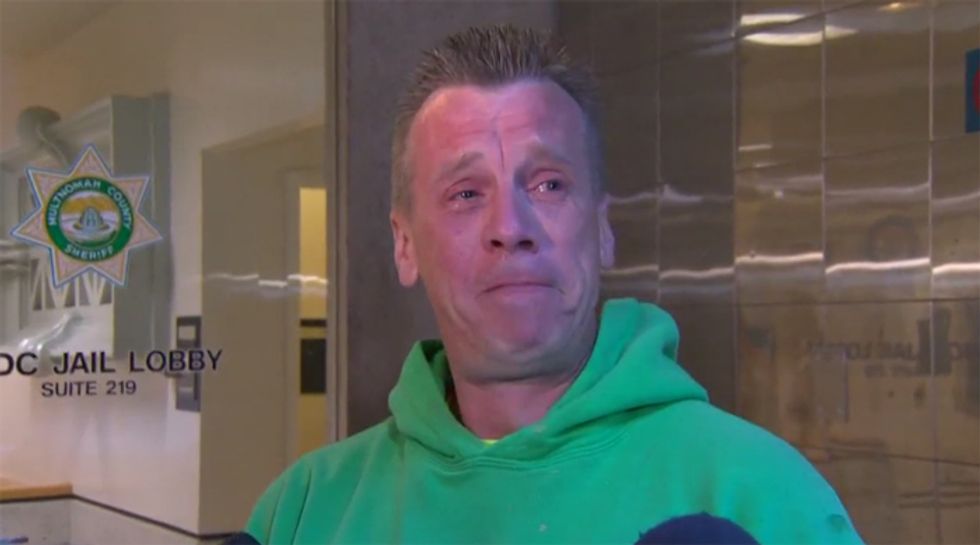 To add to his misery, he's been turned down for the role of Pagliacci.

Poor Frederick Sorrell is just an ignorant fellow who loves America and doesn't know why he ever became so afraid of Muslims, said the poor lad of 49 years Monday, after pleading not guilty. Sorrell was arrested Friday on charges of second degree intimidation with a bias crime enhancement. He seems genuinely sad that he was arrested, at least. Back on May 29, he was feeling a bit more confident in his ignorance: He's accused of swerving toward a Muslim couple in their car as he tailed them for over 20 blocks in Portland, yelling slurs at them and making a gesture that mimicked firing a gun at them.

So Another White Supremacist Stabbed Some Folks To Death, For Being Freaking HEROES

Another day in Trump's America.

The Oregon Committee of the Council on American-Islamic Relations said Sorrell had driven alongside the couple, swerved as if to hit them several times, and shouted "Take off the fucking burka," "this is America," and "go back to your fucking country" before pretending to shoot at them with an invisible gun. The harassment took place three days after a white supremacist killed two people trying to intervene when that bigot was yelling at two young women on a light rail train.

But now, look at how sorry and confused Mr. Sorrell is!

As he was leaving court Monday, Sorrell sobbed to TV station KGW -- quite convincingly if you're gullible enough -- that he had only waved his hand and pointed his finger at them, but definitely hadn't pretended to shoot, oh no.

See? He didn't go out looking for Muslims to harass, but when he saw some, some kind of demon of bigotry just seized him and he acted intemperately, but then he was finished, and he didn't even harass or threaten them more than just the one time! But he does admit he yelled at them, heaven only knows why:

I guess my fear and paranoia, I just yelled out. I don’t go on social media looking to hate on people, I guess I'm just a patriot...

The poor patriotic fellow! He also told the TV reporter, "I guess my ignorance and my stupidity is why I opened my mouth, and I shouldn’t have and I claim full responsibility.”

There's just no telling what could have possessed Mr. Sorrell to have expressed himself so inarticulately in May. Possibly loving America too much, although the usual result of loving America too much is getting horny and cheating on your wife. (That may only apply to presidential candidates.) Sorrell is scheduled to return to court in August, and in the meantime, the judge in his case has barred him from using Facebook, where Sorrell reportedly made "discriminatory comments" as well -- which we're certain he finds just as inexplicable/patriotic as his attempt to run the couple off the road back in May.

How deeply does he regret getting caught for his unfortunate behavior?

Hey, maybe the people he threatened would like to take on the project of teaching him all about their culture and who they really are, so he'll have the chance to appreciate them as individuals! It seems that a lot of unfortunate souls like Freddy Sorrell are filled with fear, and simply need our understanding.

Which of course raises an important question: Why aren't America's Muslims doing more to help patriotic bigots become less afraid of them? What are they hiding? America needs answers!

Yr Wonkette depends on your contributions -- and at least we know why we say what we write. Please click the "Donate" linky!