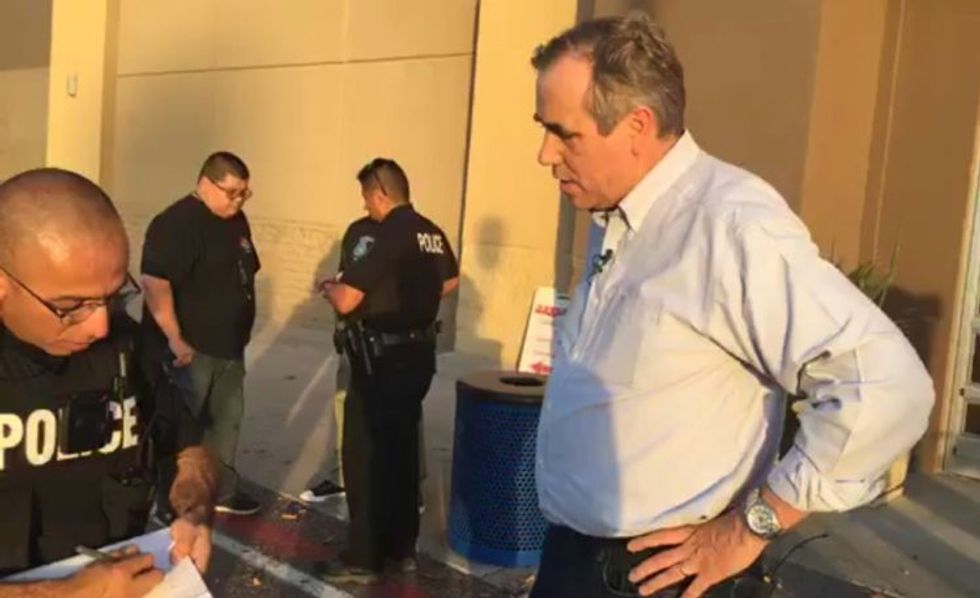 Everybody here is just doing their job. One of them can be proud of the job he's doing.

In Brownsville, Texas, yesterday, US Senator Jeff Merkley of Oregon took some aides and a camera crew with him on a fact-finding mission at a closed Walmart store that's been converted into a storage facility for migrant children. He'd hoped to be let inside to see the conditions in which the Office of Refugee Resettlement holds migrant kids after they've been separated from their families at the border. But the facts he found out were that nobody from the nonprofit that houses the children (under contract with ORR) wanted to give him a statement. And they certainly weren't going to let him tour the facility -- a week before going to the site, his office had tried to arrange a tour, but nothing doing there either. Here's the video from Merkley's Facebook:

Standing outside the ominously blacked-out windows and sliding glass doors of the former superstore, Merkley tried the phone number posted on a sign in front, told them his office had tried to arrange a tour, and was finally told a supervisor would come out to talk to him. The supervisor did show up eventually, and the entirety of the conversation was the supervisor telling the senator that no, he can't come in, and if he wants a statement, he'll have to call the main office. Then the supervisor went to talk to the police he'd called to get rid of the intruder. No, the cops weren't interested in why the senator wanted to see the child storage facility either.

Under the New Cruelty, the Just ICE department has put in place a family separation policy: Anyone who crosses the border outside an official border station is charged with the crime of illegal entry, and since that's a misdemeanor, the kids have to be taken away from their criminal parents. That includes people with valid asylum claims, and it also includes plenty of parents who seek asylum at a point of entry, despite Jeff Sessions's insistence that wouldn't happen.

The administration has alternated between openly saying the family-separation policy is intended to frighten families with children from coming north, because we don't want them here (no, not refugees either), and pretending that there isn't really a policy of separating families because the real policy change is simply a switch to prosecuting every single illegal entry as a crime -- which of course requires children to be taken away. There's your distinction without a difference for the day, kids. As Merkeley tells CNN, "This isn't Zero Tolerance. This is Zero Humanity. It's damaging children."

The federal government does "not want members of Congress or the public to know what's going on" in the center, which allegedly holds 1000 kids separated from their parents, he says. pic.twitter.com/RUOzwkbkUS

After the kids are ripped away from their parents by ICE, they're handed over to ORR and either placed in foster care with family members already in the US, or warehoused by ORR, often through subcontractors like the nonprofit that barred Senator Merkley, Southwest Key Programs, which operates 27 youth shelters. In this video at least, Merkley doesn't even get into another disturbing aspect of the New Cruelty in action: As New York Civil Liberties Union immigration attorney Paige Austin mentions in this terrific interview with WNYC's On the Media, ORR is now sharing information about foster parents with ICE. This is yet another move meant to scare people away from coming to the US. You see, during the 2014-15 wave of unaccompanied minors fleeing Central America, ORR relaxed its background checks for sponsors, and a number of teens were found to have been "sponsored" by traffickers who made them work on crimey poultry farms. To prevent that, ORR tightened the background checks and vetting of sponsor families. Under Barack Obama, ORR didn't track whether potential sponsors or their families were in the country legally, but of course now that information is of great interest to ICE -- hey, while you're placing some kids with a family, maybe we can deport Tia Rosa, too! As a result, fewer families are coming forward, and EVEN MORE kids are stuck in ORR warehouses, and of course more stories about parents being unable to reconnect with their kids will make it south.

The goal is quite explicit: scare away not only the evil laborers who are taking American jobs (which employers won't pay Americans enough to do) and ALSO scare away legitimate asylum seekers, because who cares if they die in Guatemala, Honduras, or El Salvador? Nobody ever said we wanted other nations' wretched refuse. Not like it's a law, at least.

And it's all happening without any substantial oversight -- as Merkley notes in his Facebook video, he's fairly certain no member of Congress has been allowed to tour ORR's youth facilities, and the goal is to keep everything as hushed as possible.