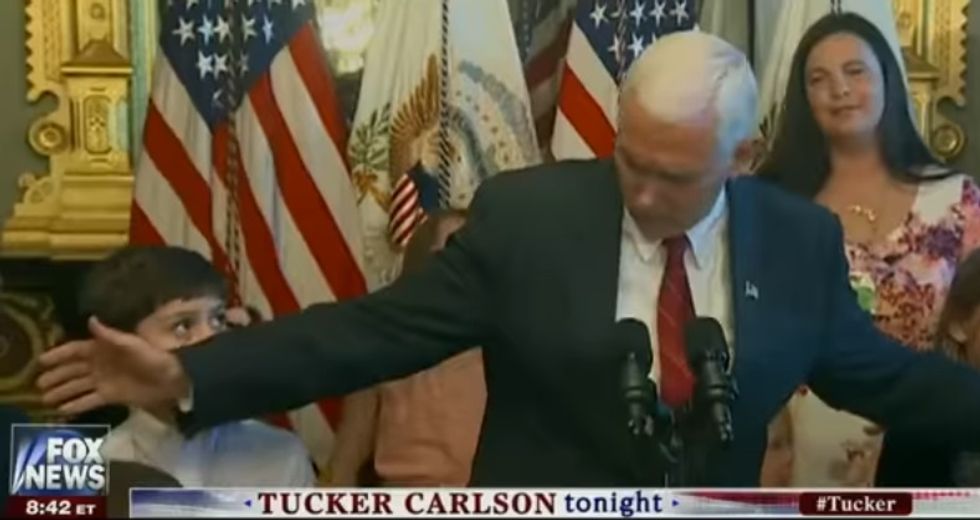 So this was a brief little moment in the news a few days back: A little boy at an event honoring military families was standing near Vice President Mike Prence, and the Veep accidentally got his sleeve in the little guy's face. This clearly bothered the boy, who waited until he could get a word with the vice president to say, "Excuse me, you owe me an apology," since clearly the boy had learned that you should politely stand up for yourself when you think you've been wronged. Pence was gracious about it, put his hand on the boy's head, and said, "I'm very sorry, I didn't mean to bop you," and the news had a sweet little story about a determined little kid who was being a kid, isn't impressed by vice presidents or other titles, and squeaked up "Excuse Me..." to Power.

Ah, but on Fox News, it was a far different story, because EVERYTHING is Culture War: This little round-out-the-newscast-with-some-sweet-fluff piece actually illustrates how children have become entitled little snowflakes who whine all the time and perceive injustice all the time and don't respect their elders, and OMG the nation is RUINED. (Probably because we don't spank them!) Oh, and also the Liberal Media is portraying this kid as some kind of hero for standing up to that ogre Pence who slapped, smacked, hit, or otherwise abused him. Maybe some outlets did say that, but mostly we just saw "brushed" or "bumped." Here are wingnut radio host Tammy Bruce and Bill Hemmer, guest-hosting for Tucker Carlson, explaining how this cute kid exemplifies What's Wrong With America, which is so pussified that we care too much about stupid snowflakes' "feelings":

Tammy Bruce: I guess we're giving birth to snowflakes now, because that looked like that kid needed a safe space in that room.

Hemmer: Is this a different time or not?

Bruce: It is a bit, the eight-year-old pretty much stalked the vice president afterwards. He wasn't even -- the headlines said he was "hit, he was struck, he was smashed, he was bonked." The fabric on his sleeve touched his nose maybe. He stalks the vice president, says, "you owe me an apology." This is like he was channeling [University of Missouri professor] Melissa Click wanting to get some muscle into the room. This is crazy. Now look, he's seen it either on television, maybe he's seen it at home perhaps, but he felt aggrieved because, I don't know, the vice president maybe slightly touched his nose. It's pretty amazing.

The story was followed by yet a longer rant about how low our country has fallen, with Hemmer and Bruce tut-tutting about a Washington Post story about how Mothers Day or Fathers Day could be awkward for gay parents, with much agita about how the Washington Post (which is merely "Jeff Bezos's personal blog," according to Bruce) has taken a minor matter and twisted it to fit their sick liberal agenda or something.

Oh, there was one eensy problem, maybe, with Bruce's condemning one cute 10-year-old (yeah, they got his age wrong, too) as the poster child for Political Correctness Run Amok:

Appearing on CNN’s The Lead, Dr. Ingrid Herrera-Yee pointed out that her son, Michael, is on the autism spectrum and that like many autistic children, he needs to rehearse and practice social interactions. Also, he’s only been verbal for five years.

For that matter, she said, Michael thought the White House was really cool, and Dr. Herra-Yee thought Mike Pence's handling of the request for an apology was just charming. Which is why she was so astonished that Fox News would take a perfectly nice little story with a satisfying ending for everyone and describe it as a symptom of how The Liberals Have Ruined Children. Hell, even "Fox & Friends" had managed to present the clip as just a cute thing.

Herra-Yee added the coverage had led to online attacks on her other son, who's 15, after he went online to defend his little brother, because the Internet Is Awful. She hoped Fox would apologize for making such inaccurate judgments with no attempt to find out what was going on, and said she wished media in general were more aware of autism. (We'd add here, based on our own limited experience with some autistic kids, that since personal space can an issue for people with autism, getting brushed in the face really may have been a bigger deal for Michael than for other kids, so his very careful, calm "excuse me" might have taken some work to get to.) To Fox, Herra-Yee said,

“Please don’t use kids. Whether they’re typically developing kids — it doesn’t matter that he’s autistic or a military kid. Forget all that. He’s a kid. And you don’t use children as examples on national television like that.”

God, so his MOM'S a snowflake too! You can't take some political culture-wars heat, lady, don't go putting your kid on TV like that! And why is CNN shilling for this whole family of people who don't matter? (Sorry, we read the comments at Mediaite.)

Today, Bruce and Hemmer have issued an apology:

First of all, I am so sorry to the family. My intention was never to hurt a kid and his mom. We had absolutely no idea that Michael was on the autism spectrum and, as a gay woman and feminist, I’ve spent my adult life working to improve the lives of women and children and those who are disenfranchised. I get it and I apologize. I also appreciated the boy's mother’s public comments and clarity on this. A main lesson here, no matter intent, is to leave kids out of our political discussions. We certainly agree on this.

You want a model of how to apologize? We'd have to say that's it: a genuine apology, not a half-hearted "if anyone was offended" notpology, and a rare moment of class on Fox News. Sure we can quibble about whether anything in Tammy Bruce's earlier performance could be called "feminist" in any meaningful way, and next week she'll no doubt be calling someone a snowflake again, but at least we have her word her target next time will be over 18. Credit where it's due, and could we please see more apologies like this.

Yr Wonkette is supported solely by reader donations. Please click that "Donate" linky down there!