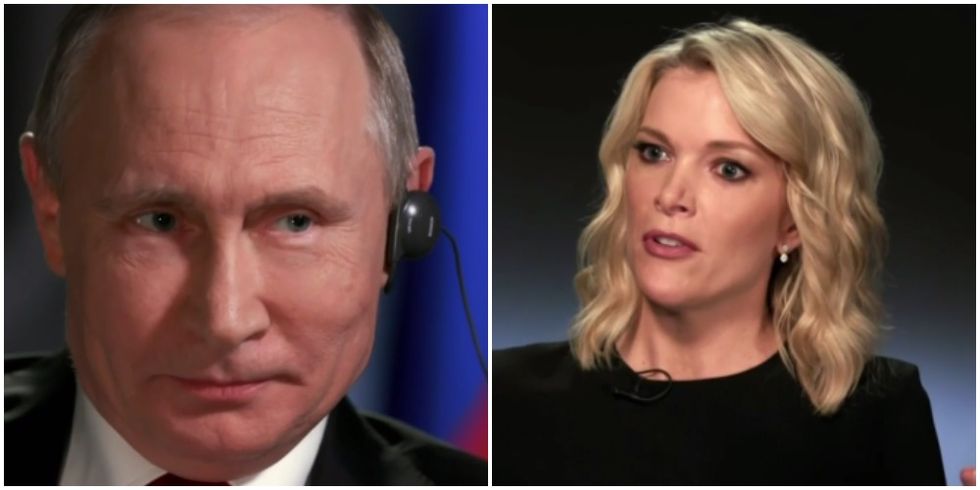 Megyn Kelly has a new job, everyone! Her NBC show "At Least I Don't Have To Run Into Sean Hannity In The Break Room Anymore" premiered on Sunday night, and to mark the occasion, she interviewed Vladimir Putin, probable puppetmaster of Donald Trump and KGB president of Russia. And oh boy, she had some questions for him about Russian meddling in the American election! And to your utter shock and awe, it appears that he lied like a slimy Russian KGB man the entire time.

In fact, Kelly interviewed Putin twice, once for her show, and earlier, in a panel discussion she moderated at the St. Petersburg International Economic Forum. Here's a clip of the earlier interview, before we get down to the big exciting one-on-one primetime thing:

In the panel discussion, Putin told Kelly that Russia didn't hack America's election, but maybe a toddler like Megyn Kelly's daughter did! That's right, you didn't know Donald Trump's 400 pound-hacker in New Jersey was a LITTLE GIRL NAMED "MADISYN" OR SOMETHING:

What are you talking about? IP addresses, they can be invented you know ... a kid of yours can send it, your girl that is three years old can perpetrate such an attack.

Putin also said blaming Russia for the hacking is just like anti-Semitism, but as NBC News notes, earlier in the same forum, he said MAYBE some "patriotic" Russian hackers might have hacked America, but he didn't know anything about it, no way, you bet, that's right, AYUP.

Now let's watch the primetime interview! Here's the video, and then we will give you some of Putin's bullshit answers:

Question: Literally ALL AMERICAN INTELLIGENCE AGENCIES agree that Russia fucked around in our election. Is everyone lying about poor, put-upon Russia?

They have been misled, and they aren't analyzing the information in its entirety. I haven't seen even once any direct proof of Russian interference in the presidential election in the United States.

Question: Uh huh, so what about those "patriotic" Russian hackers? Why did you suddenly say that?

Hackers can be anywhere. They can be in Russia. In Asia. Even in America. Latin America. They can even be hackers in the United States, who very skillfully and professionally shifted the blame onto Russia. Could you accept that?

Nah, because it's bullshit.

Putin went on to say America probably faked the Russian hacking just like how there is a conspiracy theory that says American intelligence did the Kennedy assassination. Was Ted Cruz's dad involved? WE ARE JUST ASKING! (To be more clear, Donald Trump was just asking, last year.)

Putin also said America doesn't have any room to talk, because America has intefered in MANY other countries' elections. Kelly replied, "With respect, that sounds like a justification [for what Russia CLEARLY DID]." What say you, Vlad?

It doesn't sound like a justification. It sounds like a statement of fact. Every action has an equal and opposite reaction.

Wait, so he's saying that Russia did it as an equal and opposite reaction to what America always does? No, that is not what he is saying, so stop trying to catch Vladimir in lies!

QUESTION: So what about the special prosecutor investigating Russian interference and the possibility Team Trump colluded with Russia? What about all those meetings various Trump officials (Jared Kushner,Jeff Sessions, etc.) had with the Russian ambassador?

I have no idea, I'm being completely honest with you. I don't know!

Oh well OK. Putin says his ambassadors meet with people every day and that it's just CUH-RAZY to think he might have any knowledge of such things. What is he, the president of Russia or something? He concluded by saying the Trump team didn't discuss lifting sanctions "or anything else" in the meetings Putin just said A) didn't happen and B) he had no knowledge of.

Putin asserted in the interview that he DOES NOT KNOW disgraced former national security adviser/literal actual foreign agent Michael Flynn, and when they had dinner together at that RT event in Moscow (with Jill Stein too!) they didn't even chit-chat. Indeed, Putin said he has a closer relationship with MEGYN KELLY than he has with Michael Flynn, because they worked together on this interview.

And what about Trump? Has Putin ever met her? And more importantly, does he have any compromising information on Trump, as the Steele Dossier suggests, and like many others in the intelligence community have whispered about?

Well this is just another load of nonsense. Where would we get this information from? Why, did we have some special relationship with him? We didn't have any relationship at all. There was a time when he used to come to Moscow, but you know, I never met with him. We have a lot of Americans who come visit us ... do you think we're gathering compromising information on all of them right now or something? Have you all lost your senses over there?

Here is the part where Putin scolds America for being SO MEAN and DECLARING WAR ON our beautifully and democratically elected president, Donald Trump, who deserves our love and respect:

This is just amazing. You created a sensation OUT OF NOTHING. And out of this sensation you turned it into a weapon of war against the current president. Well this is, you know, you're just, you people are SO creative over there. Good job. Your lives must be BORING.

Putin did behave differently from his boy Trump in this interview in one important way -- he DID NOT accuse Megyn Kelly of "bleeding from her wherever," like Trump did during that debate. Putin did, however, say during the panel discussion that somebody needs to give Megyn Kelly a "pill" to cure her mean anti-Russia feelings, but in that instance, it seemed like he was using her as a stand-in for ALL PATRIOTIC AMERICANS, who need to just get over it apparently. Not gonna happen, Vlad!

Wonkette is fully funded by kind readers like you! If you love us, click below, to fund us!