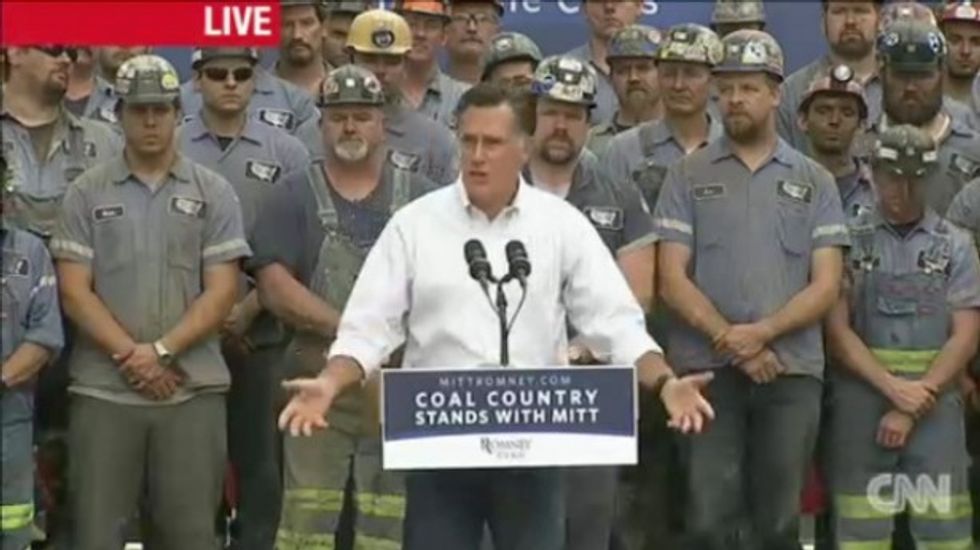 Some thought coal magnate Robert Murray of corporate behemoth Murray Energy broke the law when he made his peopleattend a 2012 Mitt Romney rally on a fucking Sunday in August when there was definitely nothing better these miners could be doing than listen to the rhetorical stylings of Mittbot. In fact, the only thing worse than digging to the center of the earth so that we can all constantly kill the planet and charge 17 i-devices might be getting photographed while standing in soot-smeared gear behind the private equity guy.

But these miners didn't have the option to work on that fateful Sunday. Because not only was the event unpaid and essentially mandatory. The Corporate Person also shut down the mine for the Romney "Sorry, No Beer" Summer Tour. But like it says in the Bible: And on the 7th Day, he stood behind an obscenely rich stiff with a lower effective tax rate.

This seems like it should be illegal, but according to the Republicans on the Federal Election Commission: time is money. Money is speech. And Citizens United means that speech equals a Corporate Person's ability to direct resources toward a chosen candidate, including an unpaid employee's time. It's the case that keeps on giving!

Murray employees also alleged that the company coerced salaried employees to tithe Romney. And this is -- like Romney -- not kosher. But luckily for Bob Murray, there are these things called "Republicans" that exist.

WASHINGTON - Even though Federal Elections Commission staff found strong indications that Murray Energy coerced campaign donations from its workers, the enforcement agency won't pursue charges against the Pepper Pike coal mining company after its oversight board deadlocked on whether to do so.

FEC's three Democratic members were outraged over a 3-3 vote on April 12 that was made public on Friday. They released a statement expressing fear the precedent would let corporations "feel they may ride roughshod over the rights of their employees."

Oh, ya think? Are you sure Murray Energy isn't quaking in its corporate wingtips over the $5,000 fine it received last year for failing to disclose its Obama Is The Worst signs were paid for with company money?

After years of bureaucratic battle, Bob Murray, a man who will fight Obama with the same zeal with which he fought against tighter mine safety measures, emerges unscathed. And so is written the last verse of the world's worst folk song.

Recall Alert! Mold is in the Sippy Cups so you're probably a terrible parent

Mayborn has received more than 3,000 reports of mold in the removable, one-piece, opaque valve of the cups, including 68 reports of children experiencing diarrhea, vomiting or other symptoms associated with drinking from a cup with mold in the valve.

Look, we'd like to blast Mayborn USA for its Chinese-made plastic cups, but parents should also feel free to thoroughly wash their child's drinking vessels even if it means using the stupid little brushes that you will lose after two days before finding it in a bowl of mac n' cheese six months later.

Yet another reason why we encourage children to feed straight from the breast until they're ready to drink milk from a carton like a common American sitcom dad.

Hey look at that: failed presidential candidate once again a dipshit senator

Have you wondered what televangelical replicant Ted Cruz is up to since punctuating a failed campaign with a forearm shiver to his poor wife's face? Probably patrolling kindergarten bathrooms or dealing with some gross lip stuff, right? Wrong! Weird Uncle Ted is back in the Senate making up for time he took off from being an obstructionist demagogue.

Last week we discussed how Exxon's GOP emissaries on the House Committee on Science, Space and Technology have all the vapors because state attorneys general are investigating Exxon. Why? Because the Oil Giant maybe just wanted to keep its own climate change data private instead of being all gauche and blah blah blah-ing about global warming with its stockholders.

Not to be outdone by creepy Texas cohort Lamar Smith, Cruz and four other Senators sent a letter to Attorney General Loretta Lynch demanding that she demand that state AGs cease making any demands of Exxon.

"The Obama administration and its allies in state attorney general offices across the country are threatening to use the power of government to intimidate and ultimately silence companies and researchers who do not agree with the government's opinions about the allegedly harmful effects of climate change and what should be done about it," Cruz, an unsuccessful Republican presidential candidate, said in a statement. "This is an abuse of power and a direct assault on the First Amendment."

Isn't it just like a government lawyer to try to stifle free speech with their "investigations" into possible "criminal fraud." Today it's Exxon. And if Cruz isn't vigilant, tomorrow they'll come for the Zodiac Killer.

Oh Senator Ted. We missed you. Like how we miss that UTI from the winter of 2009.