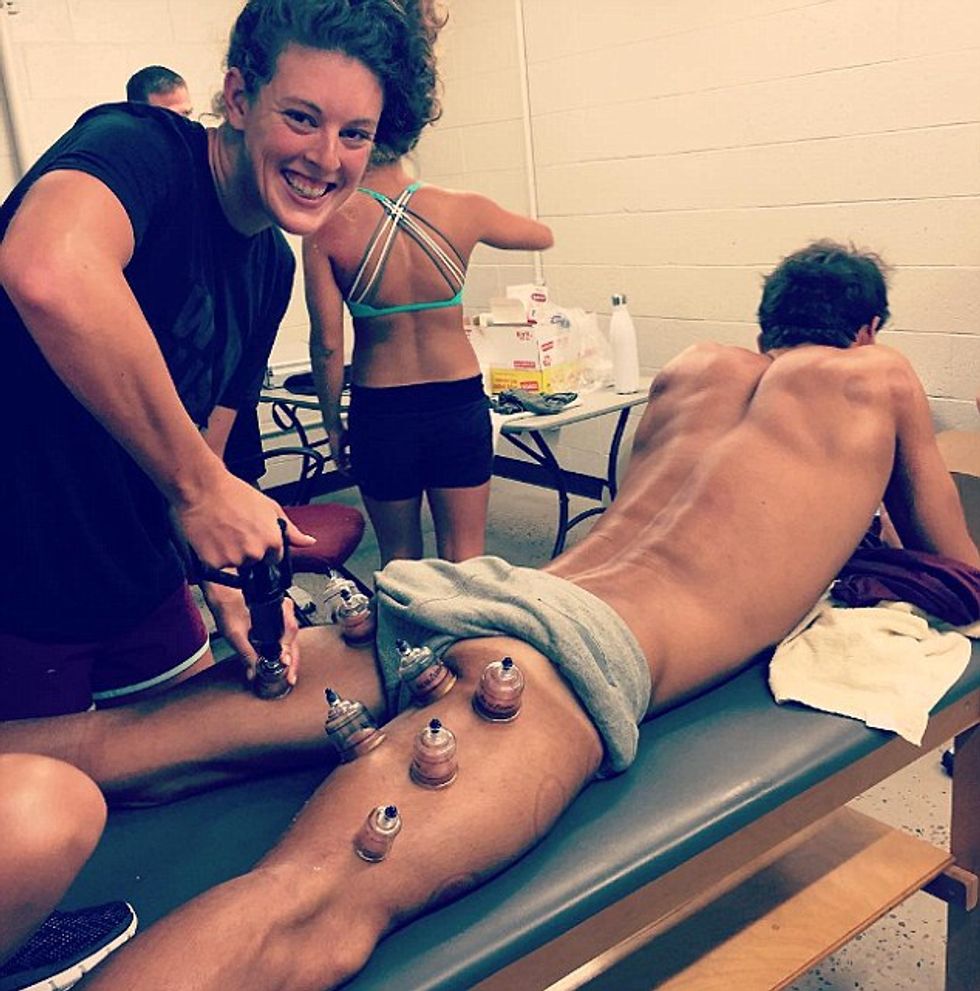 Welcome, lovelies, to the Snake Oil Bulletin, your (semi-)weekly roundup of the choicest stuff and nonsense the internet can hurl our way! A thousand pardons for our absence last week, but we're back again to make a dent in the world of pseudoscience. We have a full bulletin to digest, so let us make haste.

Oh. What? Nah, that didn't -- oh, the Olympics actually happened and we slept through it? Welp. This is awkward. We should probably nip a few points in the bud while there's still a lingering infection of Olympic fever spreading about.

The first question many viewers may have had watching the games involved that weird blue tape that half the Olympians were sporting along their bodies and faces.

That blue stuff is kinesiology tape, a particularly pointless bit of pseudoscience that has infiltrated its way into the international sports world. As explained by Tech Insider, kinesiology tape was developed by a Japanese chiropractor in the '70s, which really says just about everything you need to know about it.

The makers of the so-called Kinesio tape claim that their tape "is used to treat anything from headaches to foot problems and everything in-between. Examples include rehabilitation from sports injuries, carpal tunnel syndrome, lower back strain/pain (subluxation, herniated disc), knee and shoulder conditions, and many more."

They said subluxation! Take a shot!

How is the tape applied?

The inclusion of "insertion" is going to get us so many confused Google visitors.

The FAQ then descends into an explanation of how you can attend Kinesio seminars and professionally apply Kinesio tape yourself, which should be proof that this is TOTALLY NOT A SCAM. We did eventually find an explanation of what exactly the tape does, and it makes even less sense than when we started:

Kinesio Tape alleviates discomfort and facilitates lymphatic drainage by microscopically lifting the skin. This lifting affect forms convolutions in the skin thus increasing interstitial space and allowing for a decrease in inflammation, reducing pressure while enabling a more effective flow of blood and lymphatic fluid in and out of the target area.

Don't. No. Just stop. Nothing you described is actually a thing. This is just embarrassing. We've plowed our way through pseudoscientific technobabble before, but this Kinesio garbage is on a completely different reality. Raising the skin "microscopically" does not help recover from injuries. Real fucking medicine does.

Suffice it to say, Kinesio tape is garbage. However, it seems to be largely harmless garbage, as the worst that its application will do is make the user look like a goddamn moron in front of billions of viewers on international television. Will it help their recovery from injury or headache? No more than any other placebo would. The fact is that humans are remarkably stupid creatures - we can convince ourselves that just about anything is true with enough willpower. Hell, if people still believe homeopathy works, then they can believe magic tape can recover their shattered bones.

But that leads us to the far more salacious bit of pseudoscience that had everyone wondering: What were those giant mosquitoes that bit Michael Phelps? "Are those the Zika? They look like the Zika," your great aunt made sure to email you.

No, those strange circles adorning the bodies of the US Olympic swim team were actually bruisers they intentionally inflected upon themselves as part of the bizarre practice of cupping. Heralded as a mainstay of ancient Chinese medicine, cupping therapy involves creating a localized vacuum in a spot on the patient's skin, causing a brief experience of suction. The suction is strong enough that it ruptures the capillaries under the skin, causing bleeding and the appearance of those circular bruises. While traditional practice involves placing sticks inside the cups and then lighting the sticks on fire to engage the suction, newer practioners in the west often use mechanical vacuum cups to simulate it.

The working hypothesis of cupping is based on the same ancient Chinese garbage we've seen before with those delightful assholes who tried to slap a child's diabetes away. Bad blood exists, so causing bruises expels the bad blood through magic and such nonsense. Or, as Time magazine so credulously reported:

In traditional Chinese medicine, the theory is that cupping can influence the flow of energy or “qi” through the body, says Bauer. If someone’s flow is blocked or stagnant, a practitioner might use cupping to impact the flow. Western practitioners may focus more on what the therapy might be doing to muscles or blood flow.

Blood does not work that way. Qi is not a thing. Cupping is grade A, choice-cut dog shit. Cupping is the traditional medicine equivalent of sticking your teenage dick inside a vacuum and claiming it's therapeutic (you're welcome, teenage boys of the world, for that ready made excuse the next time your mom catches you enjoying some alone time with her Hoover attachment).

"Now hold on," you as a person unfamiliar with this blog might say. "So what if cupping is a pointless endeavor? It's not like it's hurting anybody, right?"

Except that cupping can have the very real side-effect of second and third degree burns when done in the traditional lighting-a-stick-on-fire way as seen here:

That tends to be a problem when you play with fire, as much traditional cupping therapy does. While Phelps's Instagram seems to indicate his trainer uses the more modern suction method of cupping, there's still no damn point to all this. If Michael Phelps wanted someone to simulate the joy of sticking his wiener in a vacuum cleaner he could have gone, well, literally anywhere and someone would do it for him. At this point the man's gold medals are practically encoded in his DNA. And there's probably an ancient Chinese technique to do exactly that.

Athletes are by nature a superstitious bunch. Unwashed socks, lucky jerseys, and keeping your balls blue for an entire season have all been popular athletic superstitions for generations. But cupping actually presents a danger. Intentional bruising is not healthy and can actually exacerbate injuries to the ligaments, tendons, and muscles. All the claimed benefits that cupping alleviates soreness can be replicated with a good massage, something that science has actually proven to be effective in treating soreness and muscle fatigue.

Far be it from us to tell Michael and his fellow Olympians how to care for their bodies -- our necks remain decidedly gold-free whereas his neck alone is currently worth more than the economies of half the third world. But people admire athletes. Techniques and training of the world's top athletes pass down to the amateurs and Olympians of the future. Children look up to Olympians. Spreading pseudoscience to the masses, especially pseudoscience that can potentially cause permanent burns if performed incorrectly (and since there is little in the way of cupping licensure and regulation, that potential can easily become a reality), is irresponsible and dangerous.

So to the Olympians who engage in these practices, we can only ask them to please consider what their experiments can do to millions of their fans. Many amateurs will not have the time or resources to vet their cuppers before being burned by them, and many more will spend money on tacky body tape instead of treating sport injuries with real medicine. Sports are a trickle down world. Can we try to let real science trickle down instead of this trendy rubbish?