Attorney General Loretta Lynch So Excited About Kicking North Carolina In The Ass! 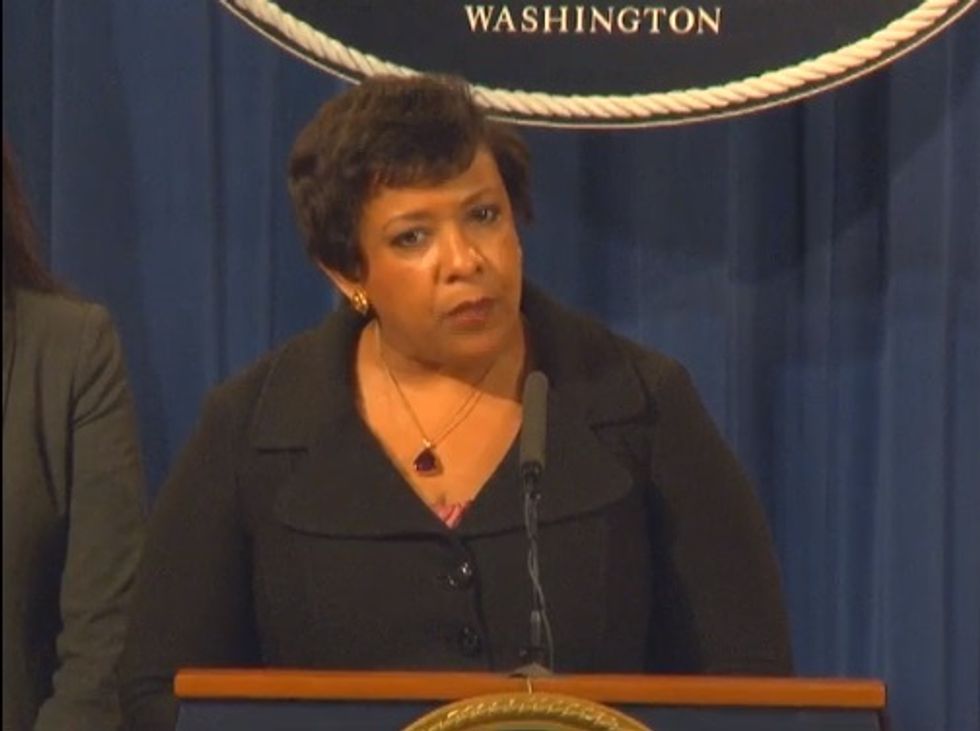 United States Attorney General Loretta Lynch is pissed off, y'all. After the Justice Department told North Carolina to fix its damn transgender bathroom law so it does not discriminate, and is in compliance with federal law (which actually supersedes state law, #ScienceFact), North Carolina hick-baby Gov. Pat McCrory's response was to file a bullshit frivolous lawsuit about how he DOESN'T WANNA follow federal law, because God Hates Transgender Bathrooms or whatever.

Lynch and Vanita Gupta, head of the Department of Justice's Civil Rights Division, held a presser Monday afternoon to announce how far up North Carolina's ass Lynch intends to stick her foot. It's with their own federal lawsuit, filed against the state of North Carolina! The suit explains that YES, North Carolina HB 2 is in violation of Title VII of the Civil Rights Act of 1964, and also of Title IX of the Education Amendments of 1972, and also the Violence Against Women Reauthorization of 2013. That is three big laws North Carolina is violating right now!

Here are some of the best parts of what Lynch had to say about her home state of North Carolina:

Lynch explained that "this action is about a great deal more than bathrooms," and stuck it RIGHT OUT THERE that hey, North Carolina, you are one of those southern states that has a pretty nasty history of discrimination, and it would be nice if you did not do that anymore:

This is not a time to act out of fear. [...] Let us instead learn from our history and avoid repeating the mistakes of our past. Let us reflect on the obvious but neglected lesson that state sanctioned discrimination never looks good and never works in hindsight.

Lynch also said, "It was not so very long ago that states including North Carolina had signs above restaurants, water fountains, on public accommodations, keeping people out based on a distinction without a difference." Hmmmm, Gov. McCrory, what do you have to say about that? Meh, probably some bullshit about OUR WIVES AND DAUGHTERS!

The Justice Department's lawsuit goes to great pains to explain to these North Carolina dongweasels what gender identity actually is, and informs them that no, you silly geese, it's not just whether a baby has a boy thing or a girl thing in its diaper. The suit even helpfully explains How Transgender Works, in case McCrory and the Republicans in the North Carolina legislature ain't know how to Google shit for themselves.

It's a far cry from Pat McCrory's lawsuit, which actually uses the argument that there is no discrimination in North Carolina HB 2, because whether you're transgender or not, you have to use the potty that corresponds to your biological sex. See, it's all equal! This argument, of course, was used a gajillion times in the gay marriage fight, it was bullshit then, and the Supreme Court laughed at it. McCrory, as we might have mentioned, is a very stupid man.

Lynch is seeking the death penalty for the all the idiots in North Carolina who made HB 2 happen. HAHA JUST KIDDING, she's not a monster! The suit merely asks the court to affirm that North Carolina is in violation of all those laws, "issue a preliminary and permanent injunction" against the enforcement of the bad law, and "such additional relief as the needs of justice may require," which is probably the part where Loretta Lynch personally STICKS HER FOOT UP NORTH CAROLINA'S DUMB ASS. That or starts cuttin' off the state's sweet, sweet government cash, wouldn't that be so sad?