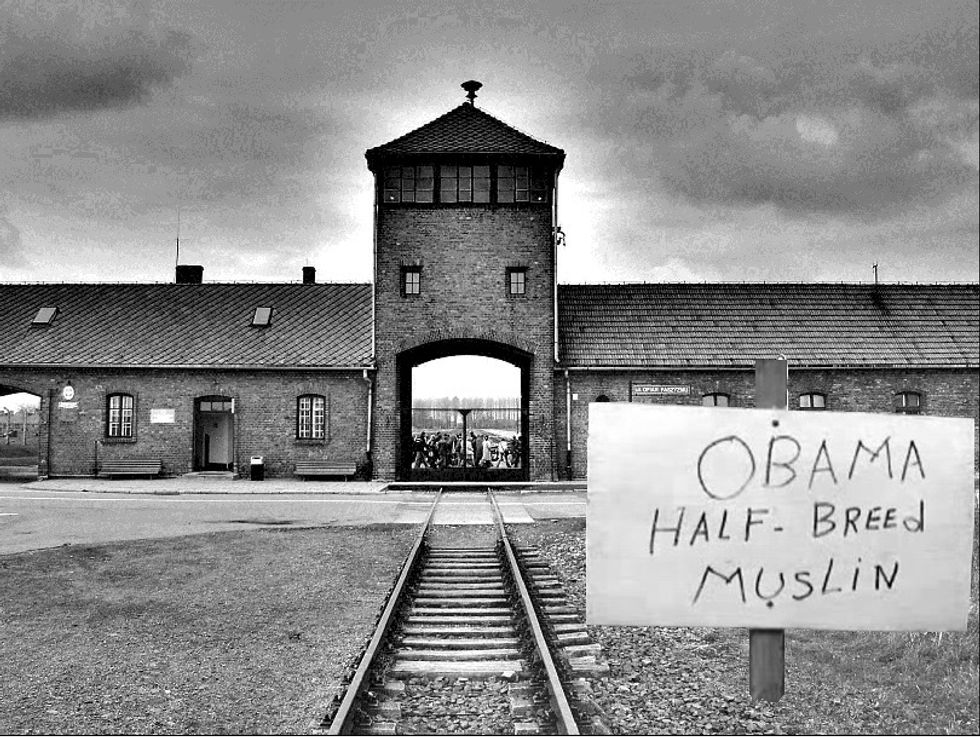 In the days since Mike Huckabee's fascinating, totally new strategy of calling Barack Obama Hitler for negotiating a freeze on Iran's nuclear arms program (which can never work because Iran is Nazi Germany), the Republican Party has rediscovered just how heady that metaphor is, with an enthusiasm not seen since the halcyon Teabag Summer of 2009, when Obama was Hitler for making people get health insurance. Only now, as Huckabee himself explained, it's totally different, because there are Real Jews who will get Holocausted by Iran! And never mind whether actual Jews are offended by the comparison, because after all, the Jews went and let themselves get killed in 1939-1945 anyway, so they probably need a Baptist preacher to explain things for them. It should be no surprise that Republicans are running to jump on the bandwagon -- or maybe it's more of a Panzerkampfwagen -- to sagely proclaim that yes indeed, Barack Obama is pretty much Hitler, Chamberlain, or maybe both of them plus Adolf Eichmann, just itching to send all the Jews to Auschwitz, now that he's given Iran the Sudetenland and the Bomb. Which they were going to get if there hadn't been a nuke deal, but somehow actually limiting their nuke program is worse.

Thus far, Huckabee's comments have gotten a thumbs-up from Rick Santorum,Ted Cruz, and Donald Trump, and a thumbs-sideways evasion from Scott Walker, who wouldn't say it that way but also wouldn't condemn the remarks. Jeb! Bush said the "oven door" comment was "just wrong,"Chris Christie said it was "too hyperbolic," and Marco Rubio bravely refused to "comment on what other candidates say." John Kasich mildly disapproved and then fell asleep in his soup. We haven't seen anything from Carly Fiorina on Huckabee's comments, but let's just assume she'd point out that as a successful executive at Hewlett-Packard, she would have driven the German railroads into bankruptcy, thus preventing the Holocaust altogether.

And then there's Lindsey Graham, who was all over the map like the borders of the Third Reich in the '30s and '40s. On Wednesday, Graham said that while he certainly thought the Iran deal was very bad indeed, calling it the "worst deal in the history of the world in terms of throwing the world into chaos," he also thought that President Obama was merely a naïve fool, not evil. Graham condemned Huckabee's Hitler talk as simply too much, mercy sakes alive:

“I don’t question President Obama’s motives,” Graham said. “That’s where Mike has gone down the wrong road. I like Mike Huckabee but this is about the most sensitive subject matter I can imagine. I am not accusing President Obama of marching the Jewish people to the ovens. I’m accusing him of misjudging our adversary, the Iranian Ayatollah, and constructing a deal that will empower them, that will create a certain nuclear arms race. Not his motives, but the outcome.”

But somewhere between Wednesday and an interview with Newsmax on Thursday, Graham decided that Obama was not quite Hitler, but definitely British Prime Minister Aaron Neville, playing the fool:

"The Munich deal would have made sense if Hitler just wanted German-speaking people under the German umbrella. Munich partitioning Czechoslovakia, and giving him more power and reenforcing his belief that the West was weak, was a terrible deal. He in fact, wanted to kill the Jews and have a master race," Graham told the Newsmax host. "This is a bad deal because the Ayatollah gets more money and more weapons and a clearer path to the bomb. Here’s what the deal does: It gives him a bomb, a missile to deliver and the money to pay for it. What would he do with a missile and the bomb? Does he feel compelled by his religion to attack Israel and destroy democracies like ours? I say yes."

But still, he's not questioning Obama's motives. He just think the president is a blithering naïve doodyhead.

Finally, to switch things up a little, we have North Carolina congressscheisskopf Robert Pittenger, a Republican who isn't running for president, but who would also like to get in on the Hitler Dogpile (a phrase for which there really should be an Urban Dictionary entry). In a Thursday radio interview, Pittenger decided that all this Iran-is-Nazi-Germany stuff was entirely too subtle, and missed just how bad the Iran deal really was. He started with the still-very-fresh comparison to Chamberlain at Munich, and then kicked it up a notch:

Iran is not going to change its stripes. Hitler did not change his stripes. Chamberlain was under some illusion that Hitler would be different in Munich and he wasn’t and we paid a great price for that calculation early on and then we addressed it. The consequences of this deal make Hitler look -- is a minor player in the context of the challenge to the rest of the world.”

Hitler? Feh! An amateur! World War II? A trifle! The Holocaust? Wasn't no thing, man. A nuclear agreement with Iran, requiring it to move 95 percent of its enriched uranium out of the country and mothball its centrifuges, with frequent inspections by the UN and an immediate snap back to international sanctions if Iran cheats? Now there, my friend, you're talking real danger.