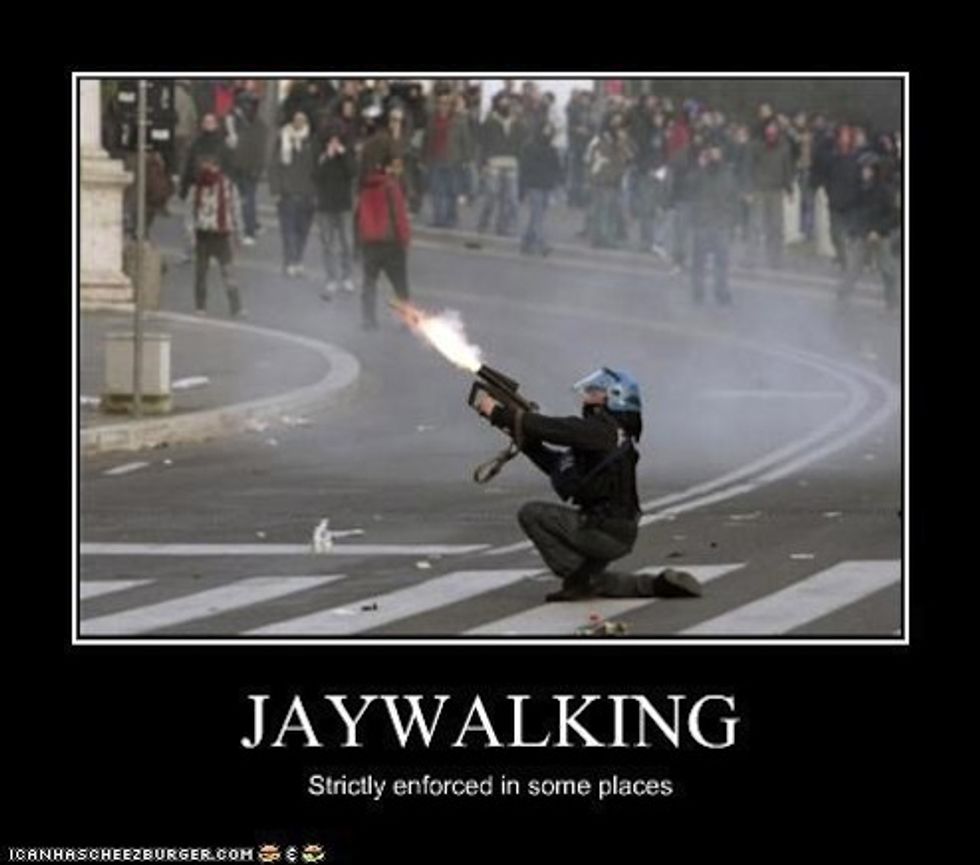 Last week, we learned of the detainment of America's most wanted criminal: a lady in Austin, Texas, who committed the terrible should-be-punishable-by-death offense of jaywalking, and then refused to provide her ID on account of not having her ID with her at the time. Naturally, the Austin police treated the matter with appropriate restraint by calling for reinforcement (instead, they got two bike cops), placing her under arrest, and throwing her in the back of the police car as she screamed that she'd done nothing wrong. Does this sound a tad extreme? Well, pffft and pshaw, because the police department was merely enforcing pedestrian and bike safety.

Besides, according to Austin Police Chief Art Acevedo, it could have been a lot worse, so really, this hysterical jaywalking criminal ought to be a little more appreciative.

She’s lucky I wasn’t the arresting officer, because I wouldn’t have been as generous. … In other cities there’s cops who are actually committing sexual assaults on duty, so I thank God that this is what passes for a controversy in Austin, Texas.

Um, er, uh, WHAT? We're not sure if Acevedo was trying to be funny -- in which case, FAIL -- or if he actually believes that the citizens of Austin -- which, we are told, is supposed to be a liberal blue island of sanity in the otherwise bugfuck crazy state of Texas -- are supposed to send flowers and a thank you card when law enforcement doesn't rape the shit out of them when they commit the major crime of crossing the street in the wrong place.

Granted, various members of law enforcement have been known, from time to time, to behave in a way that is not exactly befitting of their uniform and their duty to protect and serve. Like the infamous Officer Pepper Spray, who had to defend himself from the peaceful Occupy protesters at UC Davis, and then everyone on the internet was mean and did "psychiatric injury" to him about it, poor guy. Then there were those New York cops who raped a woman in her own apartment for committing the crime of being drunk, except they were acquitted because she totally wanted it, that whore. There was this charming story out of Oklahoma recently, where police beat an unarmed man to death in front of his family. ALLEGEDLY. Or that time New York police gunned down Sean Bell for the crime of celebrating his forthcoming wedding with some friends while being black.

We could Google stories of police behaving badly all day long, but then we'd break the internet because hey! there are an awful lot of examples of police having badly pretty much all the time, and we would have to pepper-spray ourselves in the face just to get the horrific images out of our heads.

Acevedo did apologize for his tasteless comment, so that's nice, we guess. On the other hand, we're not sure the citizens of Austin should feel all that safe knowing the cops are just barely restraining themselves from sexually assaulting jaywalkers and other such dangerous criminals. You know, for bike and pedestrian safety.