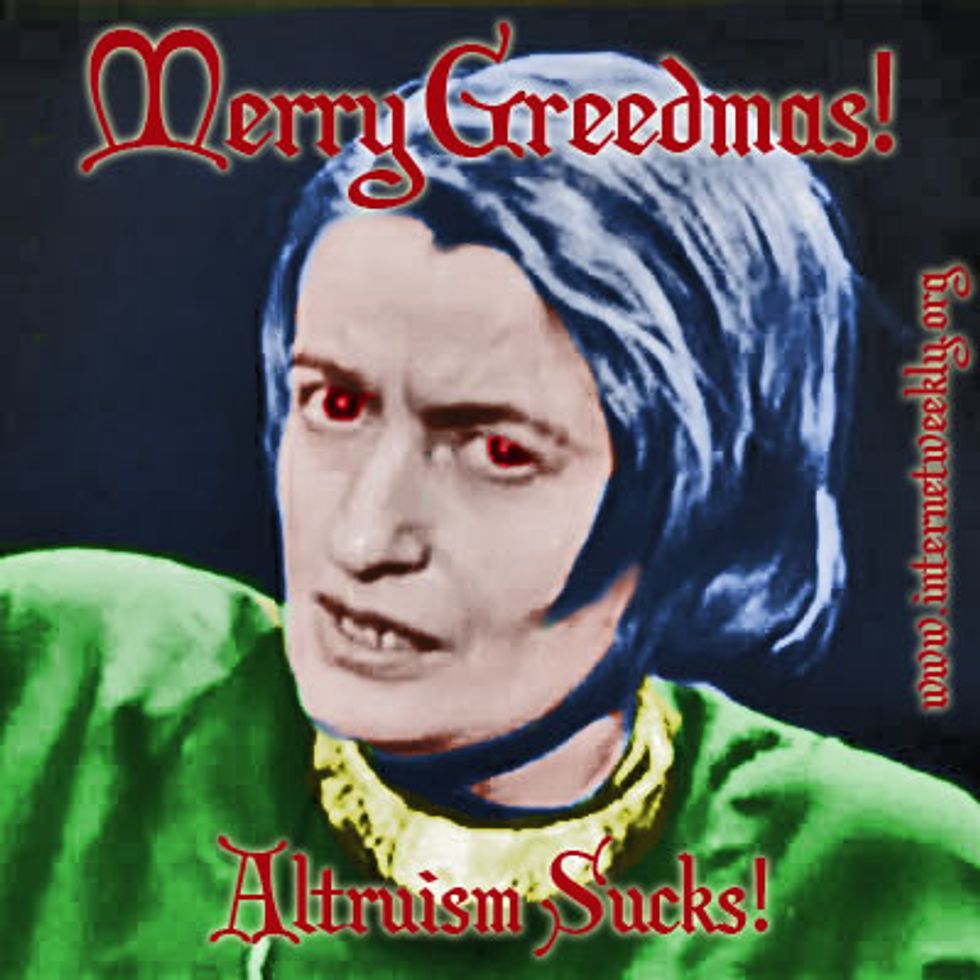 As a special War On Boxing Day gift, we bring you thisCanadian Broadcasting Corp. interview with Yaron Brook, the president and executive director of the Ayn Rand Institute. He was delighted to clear up a few things about Christmas, especially the idea that it's become "too commercial":

I think the real true meaning of Christmas is benevolence towards man, and it’s gift giving and it’s the enjoyment and celebration of life.

The CBC headlines its story "Sorry, Charlie Brown," but not all is lost for the old Peanuts special. All they need to do is re-edit it so that Linus's "That's what Christmas is all about" speech is replaced with Charlie Brown's little sister asking Santa for "tens and twenties," because all she wants is what's coming to her; all she wants is her fair share.

Brook is quite happy to Aynsplain that all that old Christian stuff about the Reason for the Season has mostly been rejected by how Americans really celebrate Christmas:

The material and spiritual go hand and hand, and I think Christmas illustrates that. You know you had to be productive and to make money all year to be able to have money to be able to spend it. All this is very non-Christian. And I think that’s what upsets people, that it isn’t linked to these ideas of sacrifice and self-denial, which I think are vices. I don’t think they’re virtues. So this is why I love Christmas so much, because it’s the celebration of the opposite of sacrifice, and the opposite of self-denial. It’s the celebration of success and prosperity.

Brook also thinks Santa Claus is way better than Jesus, because he's not sacrificing, he's just providing kids with positive reinforcement for the good-behavior capital they've built up during the year:

He’s not a Jesus-like character who suffers the most horrific death possible. Compare Santa to how Jesus acts. Jesus is the model of morality because he’s willing to suffer, literally suffer, for our sins. What Santa Claus does is joyfully reward us for our virtues. He joyfully comes and he gives us gifts because we’re good, because we’ve done good stuff during the year.

Asked if he thinks maybe Christmas consumerism has gotten a little over the top, Brook started having shoppergasms:

You walk around in New York and the big department stores are filled with lights and they’re very inviting, and they’re very warm and comforting when it’s cold outside. I think it’s so beautiful to look at and if that invites you in to purchase and to buy stuff, why is that a bad thing? It’s a good thing as long as people are doing it rationally, they’re not over-consuming, they’re not buying things they can’t afford which is always a danger.

See? He's all about responsibility. Also, screw the Little Match Girl for wasting her inventory.

There's nothing too terribly surprising about anything Brook says, at least not for anyone familiar with Rand and her "philosophy" -- except possibly the idea that you should buy gifts for others at all. It may be amusing to pass the interview along, however, to folks who think that Rand's beautiful vision of a me-first society meshes perfectly with Christian values, especially the bit where he says Santa makes sense, while Jesus is kind of a chump. Then again, maybe there's no contradiction, as long as they're both white.