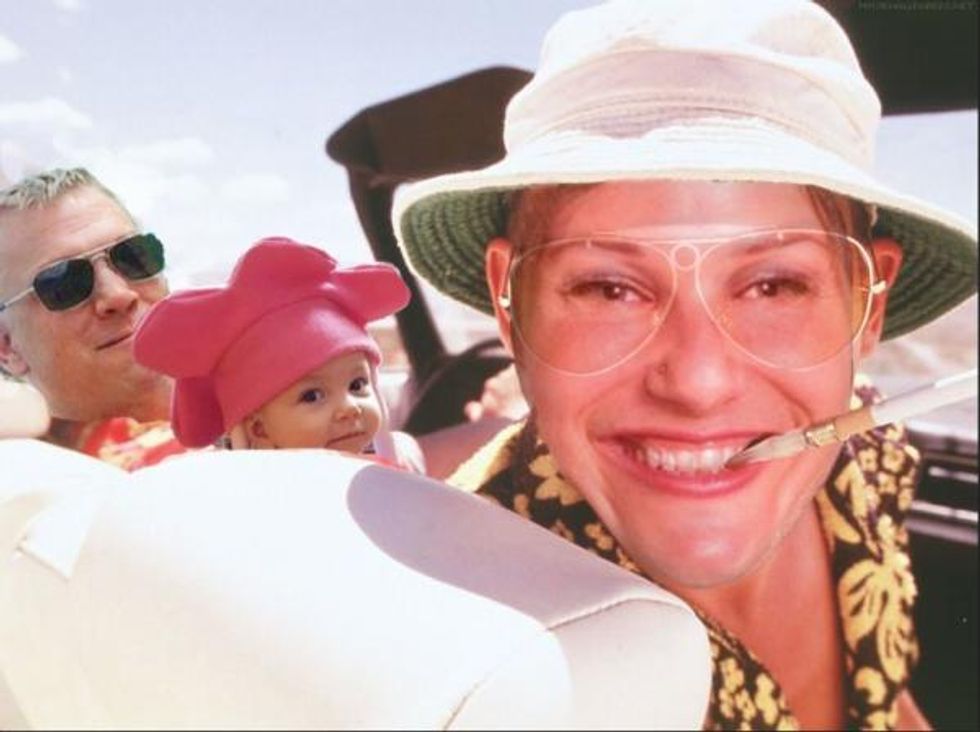 We were still in South Dakota when the bullshit patrolman decided his canine had "alerted" on our RV -- his canine had done no such thing, and my husband hadn't actually "improperly changed lanes." He hadn't changed lanes at all! And in 2014 the Supreme Court, under that RINO John Roberts, had decided you can't in fact let your German shepherd take just a little sniff around someone's vehicle once the traffic stop is over. "Actually, no, you don't have my permission to search our vehicle," my husband had told the patrolman, who was now calling -- in a friendly, neighborly, non-threatening way (we are white) -- for backup. But the patrolman knew exactly what he was doing, keeping us separated so that 20 minutes later when he didn't so much ask me as inform me that he was going to search our vehicle, well, "civil rights search law 101" went right out my pretty little head. If they took my husband to jail, how the fuck would I drive this baby and these dogs in our giant RV? Just how quickly would I be able to raise bail money on Twitter? If I demanded they follow SCOTUS decisions and get a warrant, maybe we'd still be there, but they would be mad. And it was Friday. If they kept him over the weekend, we'd MISS THE IOWA CAUCUSES! Just give them what they want, don't stand up for your rights, and things will go better for you. Everyone knows that, or at least I read stories by black women where they try to teach their children that, or the children might die. And things did go better for us, or at least they didn't go worse. We were a $270 ticket poorer, and a little lighter in the spice jar. On the plus side, I soon realized that my giant purple personal item had no doubt fallen right on their noggins when they opened the cupboard over our bed. What's a little illegal search and seizure between intimate friends?

All this is by way of saying that once we got to Iowa an hour or two down the freeway, we were ... discomfited. As white, middle class, middle aged Americans, we're used to traveling freely. (Very freely!) We're not accustomed to being targets when we drive down a highway at a lawful speed. But I guess there's no beating those drug task forces and their sweet DOJ money. We decided to be legal about where we slept, even paying an RV park for the privilege of sitting in their slightly landscaped lots, instead of in a scoop out at the side of the road. There were none. Western Iowa is seven miles down rutted mud roads at the end of which is a closed RV park, and we were getting angstier and crabbier by the quarter hour. Eventually, we found the Hitchcock Nature Center, where for $15 we had a camp site on the crown of a snowy hill all to our lonesome. We put up the dish and watched Parks & Rec, and in the morning we didn't hate Iowa.

We made our way nearly across the state to Solon, just outside the metropolis of Iowa City, where your comrade Zanzibar Buckbuck McFate and her husband and two little girls were waiting for us. My, what a big driveway! What a lovely electrical outlet for us to plug into! What NICE PEOPLE WHAT ARE NICE TO US! Hello, Solon, we're so glad to meet you!

Zanzibar -- or Lauren, as that is her "name" -- had made us a list of events happening locally. Ted Cruz was rallying! As was Rand Paul! We still had time to go see Bernie! But the line had started forming seven hours before, so Bernie was a hard ticket to get. Carly Fiorina was right nearby, and God knows there wouldn't be a line to see her! Did we wish to? We did not. Maybe we could just sit in your driveway all night Lauren? We are still freaking out about our drug raid.

Lauren understood. We went and got a ridiculously delicious pizza instead.

Sunday, we ventured out to Iowa City, and met Wonkers -- about 15 of whom came out to see us and drink beer or iced tea. Your comrade Stankbait was there, and his bride of 40 years, and their friends Kelli and Kelli's husband, who I'm sure had a name also. They brought their grown children. A favorite reader -- one who sends us $5 every time we libel the great state of Iowa -- appeared. People were good. They didn't think we should fight the ticket for illegal searches. I sort of agree. We still didn't go see Carly Fiorina. But apparently neither did Carly Fiorina.

Monday night it was time for the caucuses, oh boy! Lauren is chair of Solon's Democratic precinct, and her husband is the precinct's Hillary captain. Was that kosher? I asked her. "I don't have to be neutral. I just have to be fair." That's what we say at Wonkette too, except for the fair part. I totally got it.

A hundred and eighty people crammed into a middle school band room designed to hold 140.

It was hot. The baby was chill. She mostly flirted with a pretty high school girl who was there observing, like us. And then ... we did math. Over and over again, people would raise their hands to be counted off. It was reasonably entrancing. The baby liked the numbers I think.

Bernie Sanders had 100 caucusers to Hillary Clinton's 70. We counted again. And again. Eight undecideds (and not a single one for O'Malley) stood in the middle of the room. Most people were too shy to court them. Eventually Lauren told me about a conversation she had with two of them, young men. As she related it, they cared, and they wanted to vote, but how could they vote when all politicians are so corrupt? Okay, a) THEN DON'T COME TO THE CAUCUS, and b) if you can say that in a race in which BERNIE FREAKING SANDERS IS RUNNING I DON'T EVEN KNOW WHAT TO SAY TO YOU BECAUSE I LOST MY MOUTH WHEN MY HEAD FLEW OFF MY NECK. Lauren said she listened to them, and then tackled it this way: okay, even stipulate that ALL POLITICIANS ARE THE WORST IN THE WORLD. THEY ARE SUPERVILLAINS. Which supervillain do you think would best use his or her evil to further your agenda? The young men ended up caucusing for Hillary -- almost the only two people under 60 besides Lauren and her husband to do so. Hillary won two delegates; Bernie won three. Those numbers don't illuminate the lopsided whomping that Hillary had received, at 100 to 70. Down the middle school hall, another precinct had given four delegates to Bernie and one to Hillary. Now that's a fuckin' ass-kicking!

We were tired. Lauren was tired but went to the Unity Party with the Johnson County Dems. She and Brian had worked a very long time for this night. We went home to Lauren's driveway, and sat in the Wonkebago, packaging up some shirts. In the morning we'd be leaving bright and early trying to beat the ice storm on the way to Chicago. In the first 20 miles, we saw six cars that had slid into the freeway gully. We were not among them.

On Wednesday, from 5 to 8 p.m., we'll see Wonkers at Reggie's in Chicago. On Thursday, 4 to 7 p.m., we'll see Wonkers at St. Cece's in Detroit. Then we'll head to Manchester, New Hampshire, and maybe Boston, and definitely New York City and DC. We'll go to South Carolina, wherever Trump is having his victory party, and we'll go to Memphis, and Oklahoma City. Come see us in those places, or somewhere in between.

Check twitter.com hashtag #wonkebago for baby pictures and more. Send love gifts to us at rebecca@wonkette.com at the old paypal. Buy a Bernie shirt here so we've got a little extra gas money cushion. (If you buy a cup, we're not gonna send it to you for like five weeks, till we get home. But just think how fun it would be to get it when you least expect it! DO BUY A CUP!) And fuck it, buy yourself a Wonkette Game Of US America Elections: The Game (we're about halfway kickstartered, don't leave us hanging!) and maybe someday we'll play it together, if'n you bring the Colorado Treats.