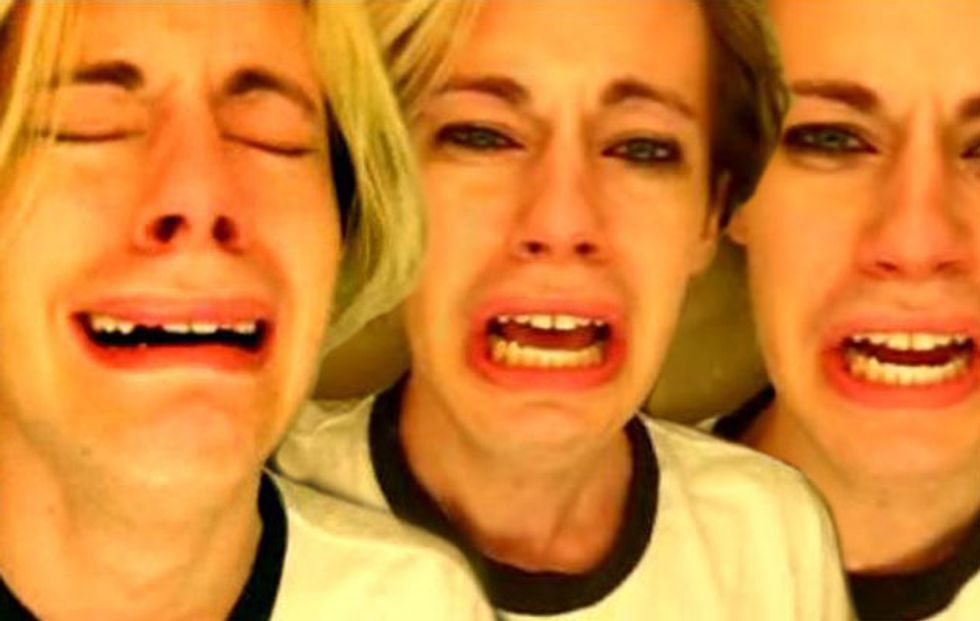 There are few more depressing experiences than hearing a friend rationalize the violent behavior of an abusive boyfriend. (Yes, we know girlfriends can be physically abusive too, sometimes, like 10 percent of the time, but we are not talking about that now so shut up and let us tell our story. Geez!) "I just make him so angry sometimes...he's under a lot of stress right now...I hit him first..."

So we were Sad when we read World Net Daily's Exclusive Scoop about how nobody understands their man crush Vladimir Putin, and nuh uh, he hasn't done ANYTHING wrong, GOD, you people, JUST LEAVE HIM ALONE!!!!

Using the mutant superpower of reading Russia Today, journamalist F. Michael Maloof performed a masterful gotcha! on the world's lamestream media, its diplomatic corps, its international treaty organizations and all sentient beings in the universe not named Vladimir Putin nor directly employed by him. Maloof (the F stands for FFS) notes that aha! Russia already had troops stationed in Crimea under its post-Soviet treaty with Ukraine, so there is no invasion, nothing to see here at all, move along.

God, honey, just listen to yourself:

WASHNGTON [sic] – Russia’s military presence in the Crimean Peninsula in Ukraine has been described as an “invasion” and a “takeover” of the region by troops that now have surrounded two marine bases in an ongoing stand-off. However, Russian troop movements on the Crimean Peninsula are permitted under a 1997 Partition Treaty signed between Russia and Ukraine, as long as there are not more than 25,000 Russian troops.

Well, sure, Russian troops HAVE surrounded Ukrainian military bases and issued ultimatums for their surrender, but how is that even a takeover? I mean, according to the Russian government, those Ukrainians are all neo-Nazis who are this close to starting a pogrom of ethnic Russian speakers in Ukraine. And if you can't trust the Russian government, what's the point of even living?

Now, we are aware that events in Ukraine are always Nuanced and Way Complicated. We spent a couple weeks there a decade ago, working with the Ukrainian Navy, and hoo boy. We had to be careful when choosing whether to say hello in broken Ukrainian or broken Russian, depending on the situation and person we were addressing. And we STILL can't tell those two dialects apart.

Sure, there ARE violent ultranationalists among the demonstrators who ousted former (current?) pro-Russian President Victor Yanukovych. But that does not make it OK for Russia to unilaterally snatch the Crimea off Ukraine like Putin hand-castrating a bear. Grownups Use Their Words in situations like this.

We know you lurve you some shirtless Putin, conservatives. We know his anti-intellectual, anti-gay and anti-Muslim barbarity makes you feel all woozly in the night time, in your fuzzy tingle time bits. But he is not good for you. He is nucking futs, and you will be better off after you dump him.

C'mon, sweetie. Forget that guy, go on vacation for a couple weeks and find somebody worth you. We hear the weather in Texas is nice.