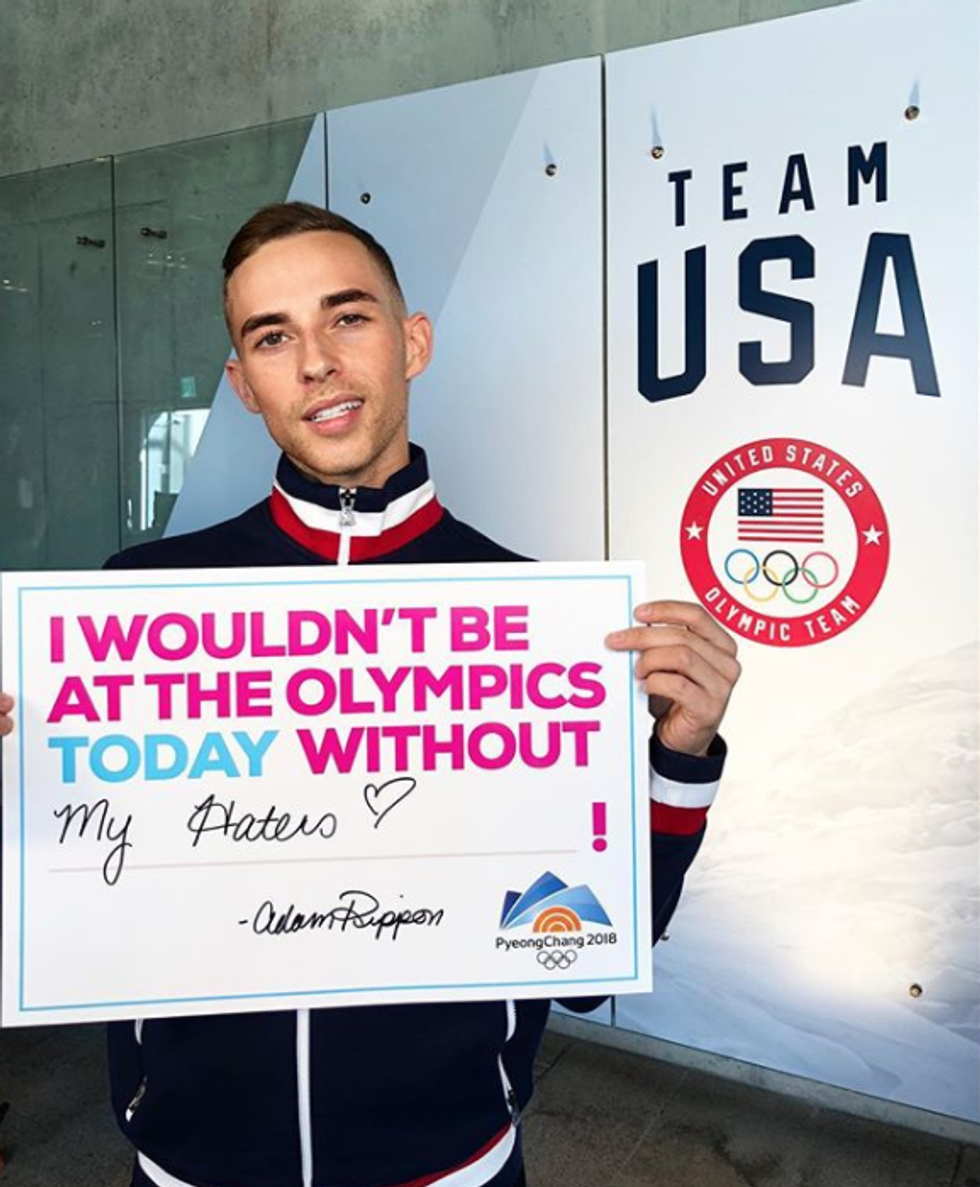 Ohmygodohmygodohmygodohmygodohmygodohmygodohmygod! It is almost time for the Olympics, which is the most wonderful time of the every two years, according to yr Wonkette! It starts tomorrow! The Olympics is the time we say things in the secret chatcave like, "Sure you bet, I definitely did see that terrible thing Sarah Huckabee Sanders just said on TV, oh was that not just awful, so terrible, and I know what she said because I am most certainly not watching downhill skiiing right now!" (Also applies to Wimbledon.)

So, for your end of day open thread, we would like to bring you lovely and wonderful and openly gay US men's figure skater Adam Rippon, who is NOT HERE for Mike Pence's gay-hatin' shit. You see, Pence is leading the American delegation to the Olympics, as if anybody in Korea wants to see his white-haired ass, and Adam Rippon is having none of it.

Indeed, Adam Rippon has been RIPPIN' ON Pence every chance he gets! (We see what we did there.) When Rippon first heard the news about Pence leading the delegation, this is what he told USA Today:

“To stand by some of the things that Donald Trump has said and for Mike Pence to say he’s a devout Christian man is completely contradictory. If he’s okay with what’s being said about people and Americans and foreigners and about different countries that are being called ‘shitholes,' I think he should really go to church."

Rippon added at the time that MAYBE if Pence was willing to have an "open conversation," he might consider it, but he didn't seem real hopeful that was in the cards. He also said any post-Olympics invitation to the White House could fuck right off.

WELL NOW it's escalated! USA Today reports that Mike Pence was real darn upset this dashing gay figure skater didn't want to talk to him in Pyeongchang, and probably wouldn't even be willing to sneak a late-night coffee with him after Mother had gone to bed, so once he saw Rippon's comments in the paper, he immediately got on the phone to beg Rippon to reconsider:

[O]n the afternoon on Jan. 17, Pence had another focus: He was so concerned about the criticism he received from U.S. Olympic figure skater Adam Rippon that his staff went to the extraordinary length of asking the U.S. Olympic Committee to set up a conversation between the two – an offer Rippon turned down.

According to two people with knowledge of the situation who were not authorized to speak publicly about it, a member of Pence’s staff requested the conversation with the openly gay Rippon after reading the skater’s derogatory remarks about him in a USA TODAY Sports story that had been published online just an hour earlier.

NO MEANS NO, Mike Pence! Adam Rippon said no in the newspaper, he said no when the Pence staffer called a few hours later, and he's still gonna say no in Korea! DEAL WITH IT, BUBBLES.

Let's just end this post with a nakey picture of Adam Rippon, so we can all LOL about what Mike Pence is missing out on.

Adam Rippon, who captioned this picture on Instagram as "VERY STABLE GENIUS 2018." Hey look at this picture, Mike Pence. LOOK AT IT.

All our salaries and servers are bought by YOU! Buy us some salaries!