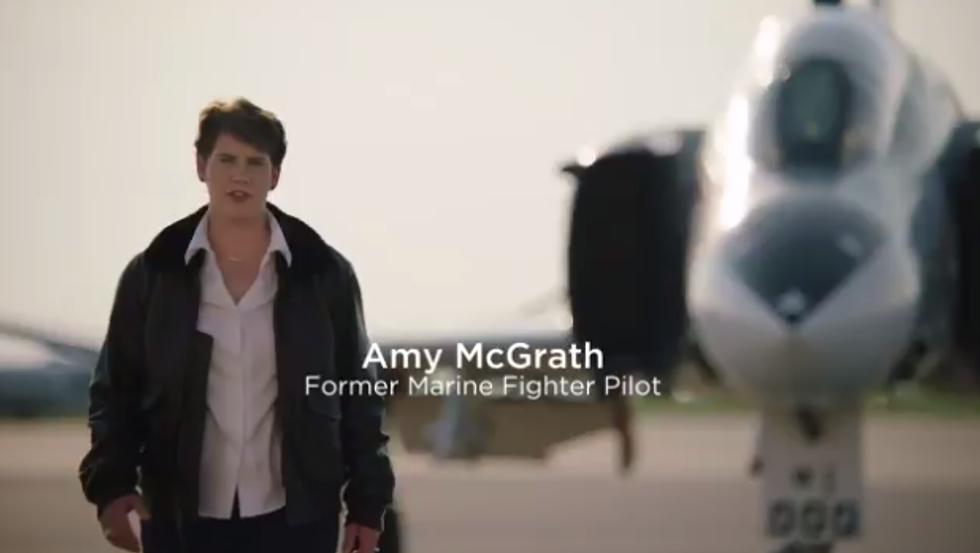 Very long ago in December of 2016, Sarah Palin got so excited reading about retired Marine Gen. Jim Mattis, the man who would become our current secretary of Defense, that she shouted "HOOHAH," which is not the thing Marines yell, but is rather a common term for a lady's vaginals. In actuality, the Marines yell "OORAH," because they wisely decided many years ago that yelling "VAGINA!" as they charged into battle would just be weird.

Retired Marine Lt. Col. Amy McGrath, a Democrat from Kentucky, obviously won't make that common Sarah Palin mistake as she runs for Congress to unseat wingnut GOP dickhead Rep. Andy Barr, a guy who votes with Donald Trump 100% of the time. Is Kentucky's 6th district doable for the Democrats? Trump only won it by 15 points, so sure, why the fuck not, because badass Democrats should be challenging A-hole Republicans in ALL THE DISTRICTS, KATIE. Besides, Marines have that "Can Do" thing going for them, which should prove helpful in such a race.

McGrath has released a really great ad. It is very PEW PEW! BANG BANG! MARINES! That's just fine with us because A) McGrath is running in KY-06, which in case you are not up on your geography, is not located in Berkeley, B) she was the first lady Marine to fly an F-18 in combat, so she can do what she wants, and C) PEW PEW! BANG BANG! WE ARE A CORPORATIST HILLARY-MONSTER WAR-MONGER DEMOCRAT!

Just kidding, we are not really a war-monger, but we are a pro-military, national security Democrat, so we like it fine, though your mileage and that of other Wonkette writers and editors AHEM may vary. Regardless of whether you are a #War Democrat or a #GivePeaceAChance Democrat, look at this through the lens of a voter in KY-06, which includes the city of Lexington (which is pretty lib-gay) and Frankfort, the little bitty state capital:

Did you like that ad? Did it make you yell "HOOHAH!" like a common Sarah Palin? WELL STOP IT, because that's still not what Marines say.

And this last part is fantastic:

This is my new mission. To take on a Congress full of career politicians who treat the people of Kentucky like they're disposable. Some are telling me a Democrat can't win that battle in Kentucky. That we can't take back our country for my kids and yours.

WE'LL SEE ABOUT THAT.

WE'LL SEE ABOUT THAT, is what she just said.

Wonkette salaries are fully paid by lovely people like you! If you love us, click below to pay our salaries!