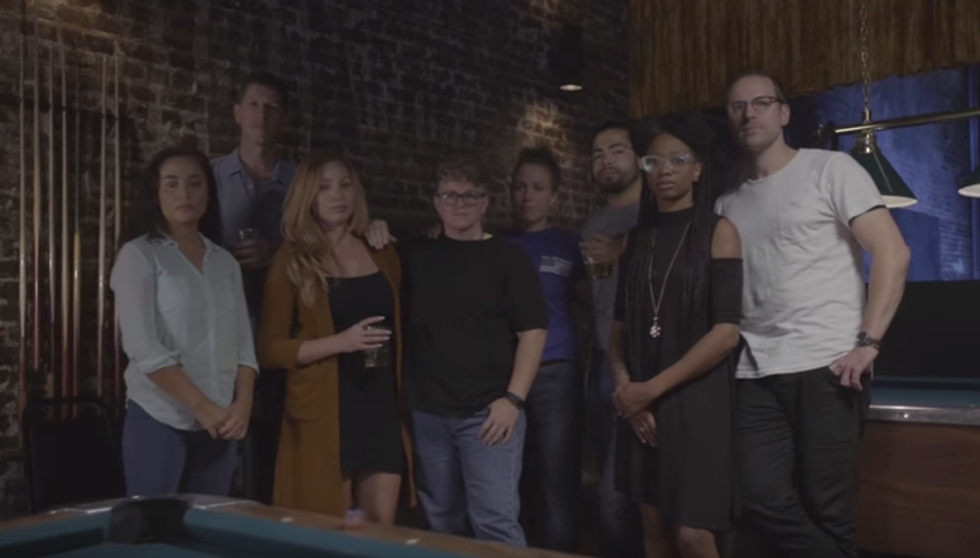 NO BOYS ALLOWED, except the ones the ladies allowed into this video.

It's the end of the day, which means it's time for us to SHARE JOY. Today's joyful end-of-the-afternoon post comes from a group of lady veterans who have 'PINIONS about Donald Trump and whether he's fit to serve as president, and by extension, as commander-in-chief of the armed forces. SPOILER: they say he is not. Here, let the women who made this ad tell you why you should support them, by giving them dollars to reach voters in swing states with their message:

My name is Wendy Barranco ...

...and I am a proud Army veteran who served her country honorably in Iraq.

Here are some things they say in the video:

MIKA, U.S. ARMY, IRAQ VETERAN: You can Google what that stands for.

(It means "buddy-fucker." We Googled it.)

WENDY: What it means is someone who always puts themselves first, the guy who steals your gear when your back is turned, the guy who talks a big game, but hides WHEN THE SHIT GOES DOWN.

CRYSTAL, U.S. ARMY VETERAN: Yeah, the problem with blue falcons like Donald Trump is they get you killed.

Or how about this part? You will like this part:

WENDY: Not only did he never serve, but he did everything he could to get himself out of it.

CRYSTAL: Because of his feet.

MIKA: His little feet hurt, and that's why he couldn't serve his country.

CUE LAUGHTER. And it's true, that IS why Trump pussed out of Vietnam service! Hey, wonder if thin-skinned baby Donald Trump will get on Twitter and cry about these lady veterans #rigging the election by making fun of him?

Now that we have enticed you with these quotes, you will watch the video RIGHT NOW MA'AM YES MA'AM:

Now, since we at Wonket are nothing if not fair, we figure we should give Trump a chance to respond to these allegations, by showing you this video of him singing and doing a little dance with his sad broken footsies to the theme song from "Green Acres," at the Emmy Awards in 2006. Now, granted, that happened almost 40 years after Trump's aching hooves disqualified him from military service, which means it IS possible the Lord hath intervened and healed the cripple at some point. But we can laugh at it anyway.

(Megan Mullally from "Will & Grace" is in it too, playing her Karen Walker character!)

LOL! Wanna know another funny thing involving Trump and the Emmys? He caterwauled (on Twitter, of course) in 2012, 2013 and 2014 about how the Emmys are rigged, because his stupid dingus reality shows never won no Emmys. AWWWWWWWWWWW. It's like his go-to excuse for when he's not good enough, smart enough, or doggone it, people hate his face.

In conclusion, those lady veterans are badass, Donald Trump is a weak and sad loser, and Wonkette approves this message.