Baltimore Takes Down Confederate Monuments In Single Night, Like A Boss 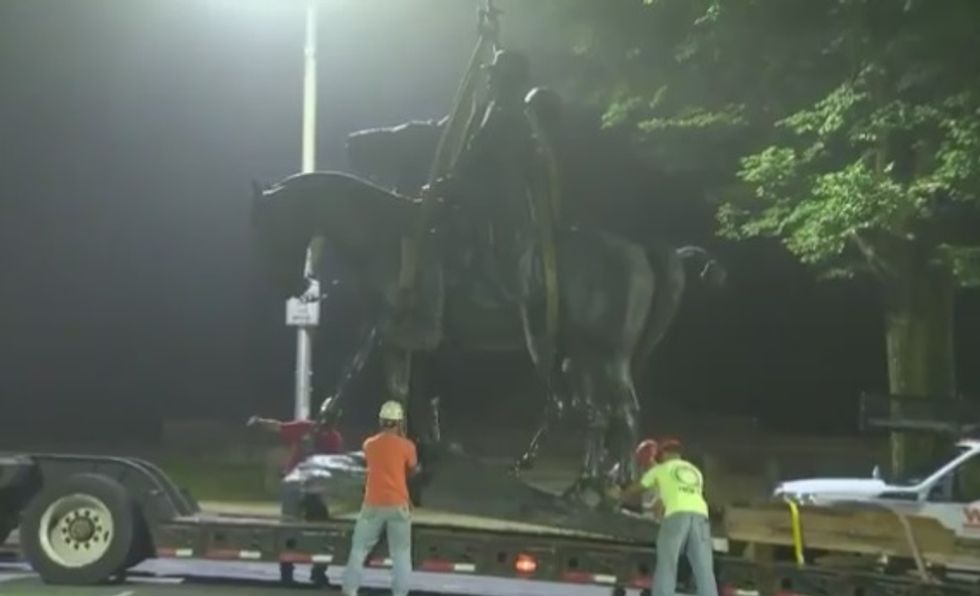 You know how Confederate participation trophies should be removed? Tempting and appropriate though it might feel, dynamite would be messy and somebody might get hurt. Those things are sturdy. Barring a big kaboom, unceremoniously hauling them away like garbage is pretty good, even if it hurts the sensitive fee-fees of some Lost Cause glorifiers of the War to Preserve Slavery. Baltimore did exactly that last night, taking away four Confederate monuments in one quick move, leaving behind their lying pedestals, which can be dealt with later:

Sundays With The Christianists: American History Textbooks For Homeschoolers In A House Divided

Apart from the purely military-tactics meaning of "great generals," that whole thing is a bright and shining lie, if you don't mind us mixing our wars up. Christian Soldiers? Sure, they prayed, and rightwing homeschool textbooks make much of that, but it was in the cause of enslaving human beings, which seems an afterthought for many Good Christians. Ah, but they "waged war like gentlemen," which is so surreal as to bugger belief. Anyway, here's some video of a crew hauling away the horses' asses:

Footage of Baltimore's Robert E. Lee & Stonewall Jackson monument being taken down, driven away on a flatbed. MORE: https://t.co/L8FhRBUJI2pic.twitter.com/S4DYdFkDC0

Credit goes to the Baltimore City Council, which voted unanimously Monday to remove them, and to Mayor Catherine Pugh, who put that vote into action without any delay or advance notice to lackwits who might show up with tiki torches. Pugh said she didn't want any Charlottesville style bullshit:

"It’s done,” Pugh said Wednesday morning. “They needed to come down. My concern is for the safety and security of our people. We moved as quickly as we could. … I did not want to endanger people in my own city."

Pugh was also facing some deadline pressure from protesters who had rallied Sunday at one of the monuments, to Stonewall Jackson and Robert E. Lee, and said they'd pull the statue down themselves if the city didn't act quickly.

The city hasn't decided yet what to do with the statues, and Pugh isn't saying where they're being stored for now. Wouldn't want to inflame idiots who want to liberate them. She said in an interview with CNN that replacing them with historical markers might be one option:

“I do believe that it is a part of our history, and there should be something that says why that statue was once there, what it represented, and more importantly, why it should not be there,” Pugh said.

As of yet, she has expressed absolutely no interest in removing statues of George Washington or Thomas Jefferson. And another great landmark is also safe:

Needless to say, there was Lost Cause Butthurt from the usual lost causes, like

Carolyn Billups, former president of the Maryland chapter of the United Daughters of the Confederacy, called the city’s action sneaky.

“Rats run at night,” she said. “It’s very saddening, but at least the monuments were not torn down by angry mobs.” [...]

“I want to know where they went,” she said. “What’s going to happen to them?”

Before they were removed, Mayor Pugh had said she was looking into seeing if Maryland cemeteries where Confederate soldiers are buried would take them; so far, they're not interested, and would rather not have the things cluttering up their cemeteries and attracting protesters or white nationalist yahoos, no thank you.

Maybe they could be melted down, mixed with the tears of people who say history should never be forgotten but also say please stop talking about slavery because it was a long time ago, and recast into something nice. One of the statues taken down was of Supreme Court Justice Roger B. Taney, who wrote the Dred Scott decision. Can't think of any better replacement than a statue of Baltimore-born Thurgood Marshall, who argued Brown v. Board of Education and was the Supreme Court's first African-American member. Sure, Marshall has a couple other statues in Baltimore already, but what a perfect replacement for Taney.

Hell, just about anything would be better than any Confederate memorial. Maybe even the old crappy couch with the Barksdale crew sitting on it:

Also, the deploragentsia on Twitter is very busy asking why Mayor Pugh wasted so much money on paying city workers to remove statues at night when she could have directed the funds to ending crime in the city, also in one night:

Well shoot, guess nobody will remember the Civil War now.

Oops, that last one is from earlier this summer, about how New Orleans really has fucked-up priorities for removing Confederate memorials before all crime was ended. What we want to know is why these folks are so worried about urban crime rates when there are so many logical fallacies still running rampant in America. Won't someone PLEASE think of the red herrings?

Yr Wonkette is supported by reader donations. Please click the "Donate" linky to help us erect a statue of McNulty asking, "The fuck did I do?