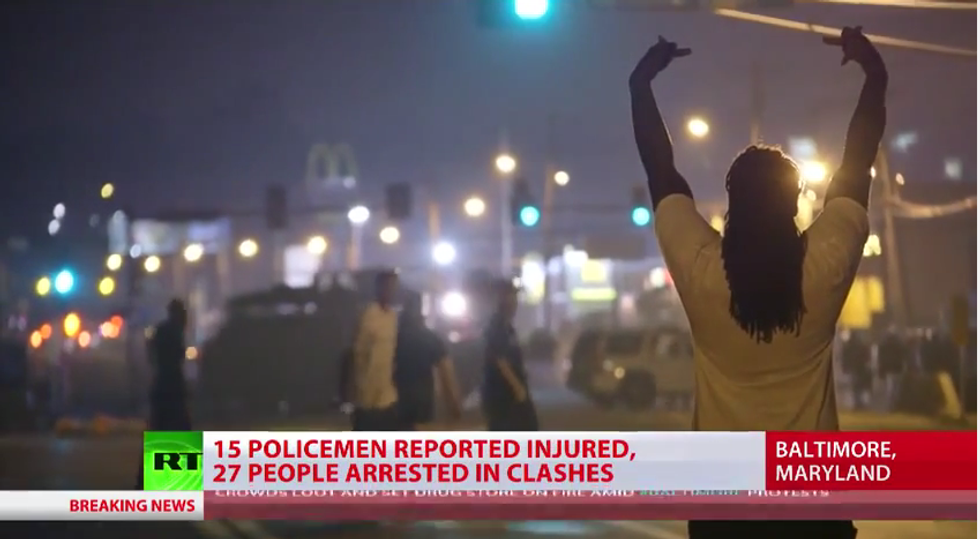 Another day, another city torn apart and going up in flames because black folk get all pissy for some reason when cops kill them and then shrug when asked to explain how the hell that happened, all the time. After Freddie Gray was arrested by Baltimore police and somehow mysteriously ended up with severe spinal injuries that killed him -- strange how police have no idea how that happened, it just did -- Baltimore's residents have reacted as you might expect, with protests and outrage and demands for answers. And the city and state have also reacted as you might expect, with cops in riot gear, a declaration of a state of emergency, a week-long curfew, and deployment of the National Guard.

The Guardian reports that on Monday night, nearly 200 people were arrested; 15 police officers were injured, half a dozen of them hospitalized; 144 cars and 15 buildings were set on fire, including more than one CVS and a not yet completed "building that was to be a 60-unit affordable housing development for seniors."

Naturally, the response from conservatives who love nothing more than lecturing Americans about how breaking the law is righteous and right when it's in the name of opposing gay marriage or refusing to pay grazing fees, is that when black citizens in impoverished cities that have been routinely terrorized and brutalized by police do it, it's Bad and Wrong. Not that we're condoning riots, destruction of a city, or the asshole(s) who sliced a firehose to sabotage the fire department's efforts to put out the fires.

Unlike white riots, however -- because their favorite sportsball team lost or their favorite coach was fired for covering up sexual assault of children or it's fuckin' Pumpkin Fest, brah -- citizens rioting because another black man or woman or child has been killed, or somehow ended up dead, requires the kind of thoughtful insight and condemnation and Just Askin' Questions of the right's most astute political observers. Like Redstate publisher and Fox News contributor Erick Erickson:

There are partisan points and there are political points. But ultimately this is an issue of culture. Culture is an issue politics does not shape. Culture, instead, shapes politics. Culture flows downstream and, like a river, carves and erodes. Our culture continues to erode things and we now have politicians and activists who surf the rapids of that cultural river as it courses through politics and they seek to make names for themselves over the eroded society.

Further downstream we are just left with mud and silt. That mud and silt can be fertile ground for seeds. And there is one seed that can be planted that no storm or flood or drought or fire can uproot or destroy. That seed’s name is Jesus. And His blood is the only thing that can save Baltimore from itself and us from ourselves.

Clearly something is wrong with Baltimore's "culture," whatever that might mean. (Black. We are pretty sure it means black.) But if Erickson thinks the real problem is the lack of Jesus, he should be sure to pass that along to Baltimore's clergy, who've been out in the streets trying to keep the peace. We imagine they're already well-versed in Jesus, as are black people in general, who have the highest churchgoing rates of any group in the country, and fuck you Erick Erickson.

Never-wrong blowhole Bill Kristol, meanwhile, thinks it's terrific that at least one mother in Baltimore smacked her kid around for engaging in the riots, but that's not good enough:

Kristol is referring to this video of a mother who saw her son on TV and tracked him down to drag him home, probably not to give Bill Kristol a happy so much as to make sure he is safe and doesn't end up injured, arrested, or dead. But guess that's really a man's job, and if more fathers were present, none of this would be happening. Just look at how great Bill Kristol turned out because he had a dad.

Fox News was reliably Fox Newsy, calling for the civil rights leaders it usually condemns as mere race-baiters for not telling Baltimore to cut that out now:

It might be a nice time, nice timing for one of the higher-profile civil rights leaders who tend to come in after the fact and say look how bad things were with the police officers, but if they came in now during the thing and say hey, let’s call for peace, let’s have some calm here.

That left Shep Smith, Fox's designated lone voice of reason, to explain that the civil rights leaders have been doing that, and will continue to do so, and Jesus Christ, could we please for once just report the news without the bloviating? (No, sorry Shep Smith, but this is Fox.)

"That’s a wonderful idea," he said to his colleague (we don't know who; some typical Fox Dude). "I’m confident they’re all watching and will, on your instruction, do exactly that."

Fox Dude then wanted to know, "Where are the parents?" Guess he hadn't seen the viral clip of the mom slapping her kid and making him go home. To which Smith responded:

Fox Dude of course insisted he's just asking legitimate questions -- y'all remember how Fox wondered where the parents were when the brave white militia was using human shields to protect Cliven Bundy's ranch, right? -- and it's fair to wonder why Al Sharpton and Jesse Jackson aren't in Baltimore right now, calming everyone down, even though Jesse Jackson was in Baltimore to attend Freddie Gray's funeral, and Al Sharpton is heading there, so Fox News can then attack them for being there and inciting violence and making things worse. As it always does.

Former Stupidest Man on the Internet Jim Hoft is unsurprisingly appalled at a video of "a protest MOB" throwing rocks at cops. We're sure he's equally appalled by the video he accidentally forgot to include of those police throwing rocks at the "mob." An innocent omission.

While the right is busy tossing around casual accusations about "culture" and "fathers" and "parents" and "civil rights leaders" and "thugs" and OOH LOOK BLACK PEOPLE BEING BLACK PEOPLE, THEY'RE THE WORST, WHAT IS WRONG WITH THEM?, it turns out not everyone in Baltimore is trying to kill whitey and burn it all down:

Amid mounting unrest in Baltimore, an unexpected alliance—members of the Bloods and Crips—emerged yesterday to call for protection of local residents. [...]

Hours earlier, Baltimore police had warned that members of "various gangs," including the Bloods, Crips, and Black Guerrilla Family, would "team up" to attack police officers and posed a "credible threat." [...]

Police might want to keep an eye on reigning Stupidest Man on the Internet Charles C. Johnson, though we don't know if his calls for violence and destruction against Mayor Stephanie Rawlings-Blake and journalists he doesn't like are credible or just plain ol' stupid:

It would be irresponsible not to ask where his parents are and to suggest he probably needs some more Jesus in his life.