Bank Lobbyists Pretending They're A Bunch Of George Baileys LOL 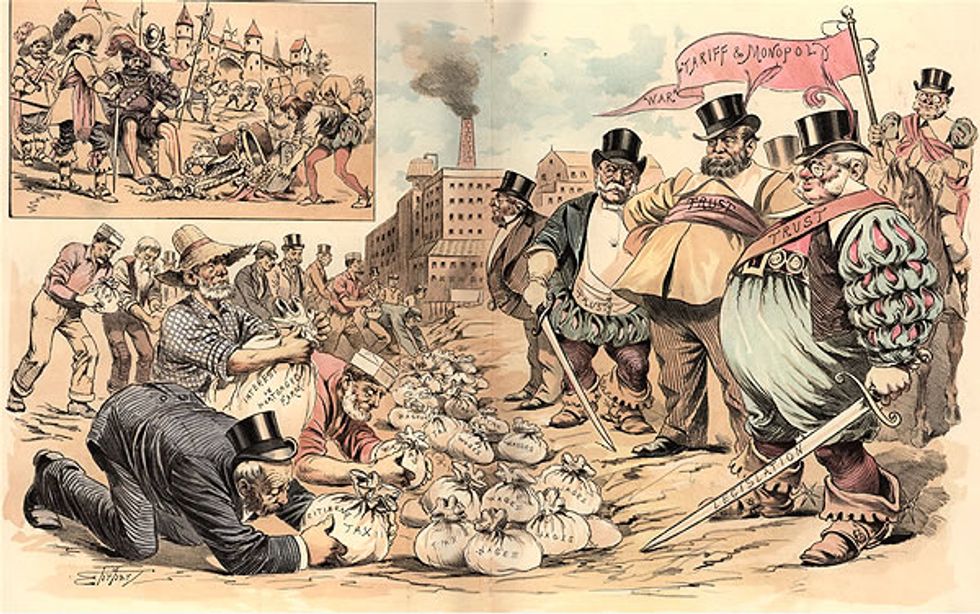 Did you grow up in a small town where you knew all your local merchants as friends and neighbors, including the nice people down at the local bank? Didja? Ah, precious It’s a Wonderful Life-type water color memories.

Maybe you saw one of the recent ads on the teevee from the nice folks at the American Bankers Association (ABA). The ads, which have appeared on such programs as NBC’s Meet the Press, CNBC’s Closing Bell, and CNN’s The Situation Room, feature community bankers who are, in actual fact, part of the ABA. In one, a series of nice “hometown banker” folk from all over This Great Land of Ours© discuss how their nifty 24-hour fraud protection is helping ordinary everyday run of the mill people just like you and me. And at the end of the spot, a nice tow-headed South Dakota banker assures us that, shucks, jes’ like you, he don't like wearin’ a necktie his own self neither. [contextly_sidebar id="SGn6GMj2HCIbES7itKL0P3gwfxKJNQ5b"]

So, you cynical bastards are asking, what's the catch? Alexis Goldstein, writing at Bull Market, explains:

I was surprised to see what appeared to be a PR campaign for community bankers — after all, why spend the money? But the ad’s sponsor wasn’t a community bank. Instead, the ad came from one of the most sophisticated and powerful Washington lobbying groups, the American Banker’s Association (ABA). The folksy nature of the ad belies the kind of lobbying that remains at the heart of the ABA: advocating for the biggest banks, while using small banks as a PR human shield.

Rose-colored ads aimed at repairing the reputational damage done to megabanks are not novel on cable news. But to see an ad run by the ABA was new to me. And it is, indeed, new: ABA spokesman John Hall told the Washington Business Journal the campaign “is the ABA’s first nationwide television campaign since the 1990s.” The Washington Business Journal noted that the ads come at a time when America’s opinion of bankers continues to slide[.]

So okay, no big deal, just another cheesy Big Bucks PR campaign to gull the gullible masses, I hear you cynical bastards muttering in your beatnik beards. But Ms. Goldstein has a question.

While declining public perception of bankers is a plausible reason for the ABA to run an ad campaign, I still found myself asking the question: who’s the target audience? While the average viewer of cable news may be familiar with the names and misdeeds of large banks like Citigroup or JPMorgan, they’ve probably never heard of the American Bankers Association. The only people who’ve actually heard of the ABA are policy wonks or finance nerds like myself, and why waste a whole ad buy on them?

Hmm. Perhaps the ads aren’t meant for the audience watching it, or at least not exclusively. Perhaps it’s also meant to flatter and co-opt the community bankers who appear in the ads.

If the ABA is aiming to butter up community bankers, it appears to be working: Bruce Whitehurst, CEO of the Virginia Bankers Association, told Mark Hoplan of the Washington Business Journal that he was “flattered” to take part in the ad campaign.

Ms. Goldstein, who appears to be as cynical as you cynical bastards (you cynical bastards), notes that although the ABA adds all end by assuring us that “we're America’s hometown bankers,” the ABA is primarily (gasp!) a creature of the big boys.

But a quick look at the last few comment letters by the American Bankers Association shows that their advocacy is anything but “hometown.” In December, they complained about the challenges of complying with sanctions against the Ukraine. In November, they lobbied against imposing margin requirements on certain types of derivatives transactions between affiliates within large, complex corporations. And earlier that same month, the ABA argued against further regulation by the Department of Labor to ensure participants in certain retirement plans are not exposed to undue risks.

Well, but hometown bankers are part of the ABA, so maybe the ABA embraces small town values like, you know, supporting our troops, right? Oh, you're way ahead of me aren't you, you cynical bastards.

And when the ABA does lobby on issues that could be considered “hometown,” they’re lobbying pretty unsympathetic positions. On December 18th, the ABA wrote a letter lobbying against new protections for military families against predatory lending, arguing it may “deprive them of valuable and beneficial mainstream products.”

Ms. Goldstein closes by noting that while the ABA has not said what the ads cost, their spokesman Mr. Hall did say that the ads were “timed to leverage positive changes in the national economy” and that the ABA is “looking to begin a new day.”

Positive changes. A new day. Hey. You know, maybe it's gonna be a wonderful life after all.

You can follow John on Twitter, where he often twits about yr Wonkette. He's just as cynical as you and an even bigger bastard.