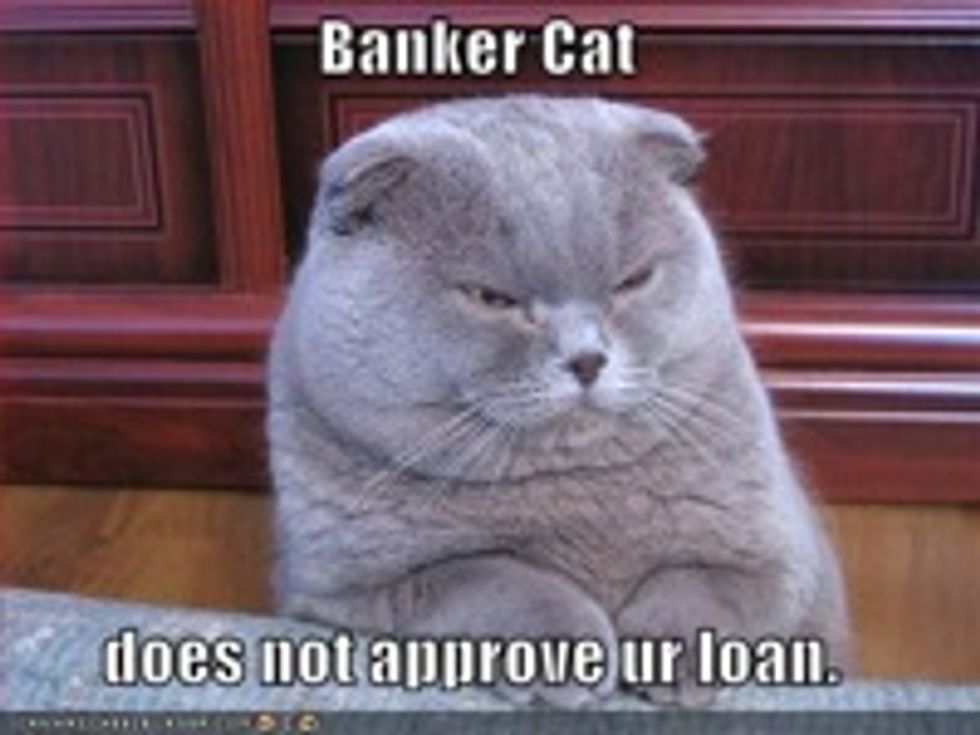 Remember that elderly disabled veteran that Wells Fargo wrongfully foreclosed onand then billed to death over a typo? Well too bad he dropped dead in court, because he otherwise would have (maybe) been entitled to a cool $300 - $1000 to compensate him for his time and inconvenience. No, really: this is what his time and inconvenience (and also, his house) is worth according to federal regulators. DON'T SPEND IT ALL IN ONE PLACE OK?

The vast majority of borrowers being compensated for mortgage-related abuses will get $1,000 or less apiece, a sobering coda to a protracted attempt to help those who may have been placed into foreclosure as a result of banks' mistakes.

About 4 million borrowers will share $3.6 billion in cash as part of a settlement between federal regulators and banks accused of foreclosure-processing mistakes. U.S. regulators said Tuesday that banks wrongfully took away homes from 1,082 borrowers who were members of the U.S. military. Another 53 borrowers were found to have lost their homes despite not actually defaulting on their loans. Those 1,135 individuals will receive checks of $125,000.

Aren't they lucky! $125,000 for having their homes taken and sold out from under them, and their lives possibly destroyed for a little while! Sounds like a fair trade, right? Their time cannot POSSIBLY be worth as much as the bank's time, so seems fair and square.

Most borrowers, however, will see far less, with about 80% receiving checks ranging from $300 to $1,000, according to data released by the Office of the Comptroller of the Currency and the Federal Reserve.

Because the foreclosure review was shut down by regulators, it isn't clear in many cases how badly the borrowers were wronged, if at all.

And even though banks compensated borrowers, they didn't acknowledge wrongdoing.

Banks can't do wrongdoing, we thought everyone knew that, duh. "Wrongdoing" implies accountability, and bank executives do not have that; they are special, kind of like famous movie stars but without the good looks or charisma. Taking someone's home and then selling it and then keeping the money and then giving them far less than the home was worth -- that isn't "wrongdoing" by any stretch of the imagination.

Anyway, surely people can just take the money and move on now that their credit scores have been fixed and their loans modified as part of the settlement process. Except ha! ha! Don't be silly -- no one is getting their credit scores fixed, and the banks are not required to modify loans:

The settlement will do little to repair the long-standing effects on consumers of being placed into foreclosure, such as damaged credit. Banks must notify credit bureaus independently about any changes to a borrower's credit history and aren't required to do so as part of the settlement with regulators.

But let's all focus on what's important here -- making the banks happy:

A Bank of America spokesman said "we are pleased payments to borrowers are being initiated so quickly under this new approach." A Citigroup spokesman said the bank is "pleased to support the OCC and its efforts of assistance to consumers who qualify for benefits from the agreement." A spokesman for J.P. Morgan and a Wells Fargo spokeswoman declined to comment.

Aren't you happy that the banks are "pleased," given that they seem to control our fortune more than, say, the government that we supposedly democratically elected?