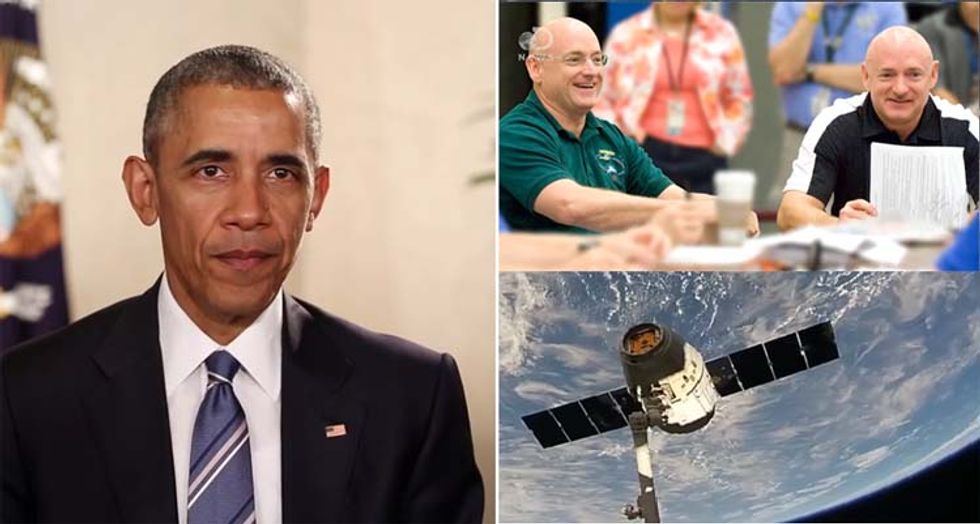 How is this helping the war effort? IT ISN'T!

[wonkbar]a href="http://wonkette.com/580555/girl-scouts-show-obama-science-projects-he-did-not-build"[/wonkbar]One of the nice things the White House does every year is its Science Fair, which is usually good for some nifty videos of Barack Obama playing with a marshmallow cannon or meeting adorable Super Girl Scouts who built a page turning machine out of Lego blocks ("it's only a prototype"). To coincide with the 2016 White House Science Fair, the president will be doing some very short news stories on the Science Channel's nightly newslike program, Science Presents DNews. Needless to say, this was fodder for mockery and anguish from the nine paid staffers running the clickbait rage machine at Twitchy.

A story from The Hill drove them right up the wall: Why is Obama playing host to a science fair and frittering his time away on television instead of what he SAYS is his "number one priority," fighting ISIS? Huh? HUH?

Why, yes, they did also complain that he played golf last week, too. Obviously, if Barack Obama spends maybe an hour taping five very short news segments about science, he is letting Our Enemies gain the upper hand -- shouldn't he be spending every possible hour in the War Room? What a hypocrite! President Cruz will never waste his time talking about science, except for when he announces more cuts to NASA's budget for studying climate change.

[wonkbar]a href="http://wonkette.com/560493/creationist-bobby-jindal-doesnt-understand-why-obama-hates-science-so-much"[/wonkbar]Besides, who is this Barack Obama to go talking about science anyway, when he is a notorious Science Denier, according to no less an authority than Bobby Jindal, the former governor of Louisiana's oil and gas industry? The Twitchers were quite rightly aghast:

Haw, haw, anyone who says climate change is real yet still uses an aeroplane is clearly a hypocrite and a liar! We would like to know more about how Barack Obama's government is "anti-science" -- probably all that climate change stuff, or maybe he fails to recognize that the Earth is only 6,000 years old, as all reputable scientists do.

For what it's worth, it sure looks like the segments were filmed at the White House, with a minimum of travel or time taken away from the situation room. After all the pissing and moaning, here's the first, from Monday, a nice enough little overview of NASA astronaut Scott Kelly's record-setting year in space:

Are you outraged, Americans? We know we are: He didn't mention Tang even once. If you want to be similarly outraged the rest of the week, Barack Obama's DNews segments will run each night at 9 Eastern on the Science Channel.