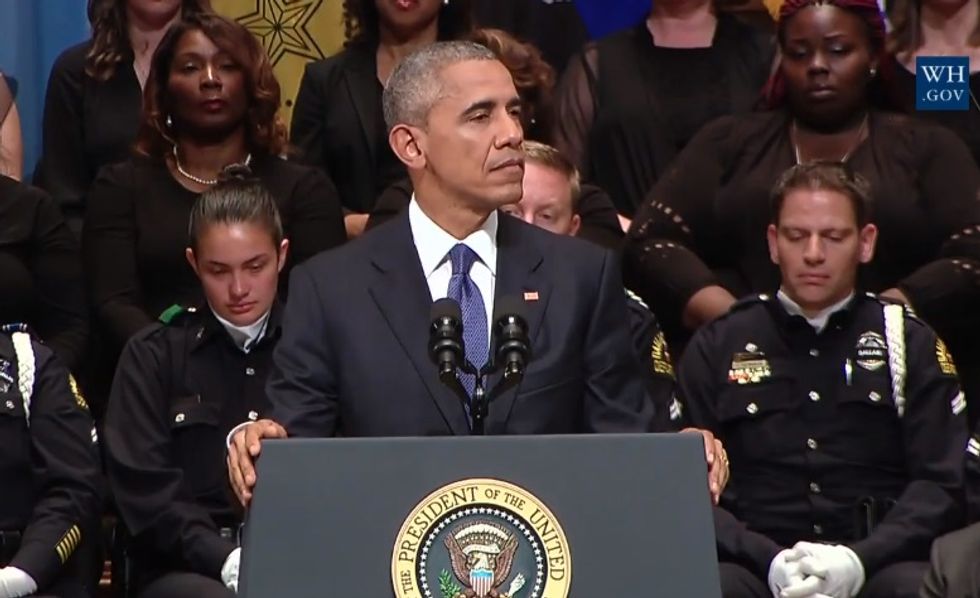 President Obama has gone and made us cry again with another beautiful, thoughtful tribute to the dead in a horrible shooting. And as usual -- we wish it weren't usual, but these things have become too familiar -- he managed to leave us with some hope by the end. God, we're going to miss this president.

There's plenty to be said about Barack Obama's speech, which reminded us once again what a gifted, serious-minded president we have, and managed to address multiple audiences at once. One of the first things that struck us was the contrast between the president's view of the role of law enforcement in our nation, and the simplistic twaddle that Donald Trump had said Monday when he proclaimed himself the "Law and Order Candidate." Ever the authoritarian, Trump said our law enforcement officers are "what separates civilization from total chaos and the destruction of our country as we know it." By contrast, Obama put the job of policing in a far more accurate context. After a brief personal note about each of the slain cops, Obama reminded us that these officers and their families "shared a commitment to something larger than themselves" in a job that was dangerous, stressful, and too often thankless. But it's a vital duty in our contentious little democracy:

No, the reward comes in knowing that our entire way of life in America depends on the rule of law; that the maintenance of that law is a hard and daily labor; that in this country, we don’t have soldiers in the streets or militias setting the rules. Instead, we have public servants -- police officers -- like the men who were taken away from us.

And that’s what these five were doing last Thursday when they were assigned to protect and keep orderly a peaceful protest in response to the killing of Alton Sterling of Baton Rouge and Philando Castile of Minnesota. They were upholding the constitutional rights of this country.

That's where we'd like to turn to Donald Trump like Linus in the Christmas special and say, "That's what law and order is all about, Mr. Trump." It's what Trump's pinched vision was missing: Yes, police keep order. But not for the sake of order itself -- you can do that pretty well with a Stasi or a Gestapo or the paramilitary of your choice. Give us Barack Obama's vision of the rule of law as something that requires regular maintenance. And adjustments, when need be. Obama also gave credit to the fact that the police in Dallas were there to protect the rights of protesters who were not happy with police in general, because that is how America works:

And despite the fact that police conduct was the subject of the protest, despite the fact that there must have been signs or slogans or chants with which they profoundly disagreed, these men and this department did their jobs like the professionals that they were. In fact, the police had been part of the protest’s planning. Dallas PD even posted photos on their Twitter feeds of their own officers standing among the protesters. Two officers, black and white, smiled next to a man with a sign that read, “No Justice, No Peace.”

All of it has left us wounded, and angry, and hurt. It’s as if the deepest fault lines of our democracy have suddenly been exposed, perhaps even widened [...]

Faced with this violence, we wonder if the divides of race in America can ever be bridged. We wonder if an African-American community that feels unfairly targeted by police, and police departments that feel unfairly maligned for doing their jobs, can ever understand each other’s experience.

And then came the pivot, calling back to Obama's 2004 Democratic Convention speech:

I’m here to insist that we are not as divided as we seem. And I know that because I know America. I know how far we’ve come against impossible odds. I know we’ll make it because of what I’ve experienced in my own life, what I’ve seen of this country and its people -- their goodness and decency --as President of the United States. And I know it because of what we’ve seen here in Dallas -- how all of you, out of great suffering, have shown us the meaning of perseverance and character, and hope.

In the conservasphere, the speech is being trashed as an insult to the slain police because Barack Obama also spoke about the killings of Alton Sterling and Philando Castile, and said their lives, black lives, mattered. Clearly, some were listening only for the parts they could be outraged by, but we heard a president praising brave men and women doing their jobs, with help from members of the community:

When the bullets started flying, the men and women of the Dallas police, they did not flinch and they did not react recklessly. They showed incredible restraint. Helped in some cases by protesters, they evacuated the injured, isolated the shooter, and saved more lives than we will ever know. We mourn fewer people today because of your brave actions [...]

The police helped Shetamia Taylor as she was shot trying to shield her four sons. She said she wanted her boys to join her to protest the incidents of black men being killed. She also said to the Dallas PD, “Thank you for being heroes.” And today, her 12-year old son wants to be a cop when he grows up. That’s the America I know.

An insult to police? We thought it sounded pretty inclusive and uniting when Obama said, "in this audience, I see people who have protested on behalf of criminal justice reform grieving alongside police officers. I see people who mourn for the five officers we lost but also weep for the families of Alton Sterling and Philando Castile." Isn't that the point? Mourning all our dead? Or are we only supposed to care about one set of grieving families?

Ah, but the president had to go and say that black lives do matter, and that while we've come a long way, law enforcement isn't immune to institutional racism. Acknowledging that reality was a step too far for some people. While we were searching for a transcript of the speech, we found this, which is a transcript, of sorts:

Sadly, that's the America we know, too. But we'd like to think we can do better, and so instead of being angry at Ben Shapiro, we're going to feel sorry for him for not listening to Obama's speech at all, or for being incapable of hearing it clearly. The president had said this:

In the aftermath of the shooting, we’ve seen Mayor Rawlings and Chief Brown, a white man and a black man with different backgrounds, working not just to restore order and support a shaken city, a shaken department, but working together to unify a city with strength and grace and wisdom.

And in the process, we've been reminded that the Dallas Police Department has been at the forefront of improving relations between police and the community. The murder rate here has fallen. Complaints of excessive force have been cut by 64 percent. The Dallas Police Department has been doing it the right way. And so, Mayor Rawlings and Chief Brown, on behalf of the American people, thank you for your steady leadership, thank you for your powerful example. We could not be prouder of you.

Did I say we were not angry at Ben Shapiro? Okay maybe a little. But in addition to acknowledging that there is indeed still racism in America, the president got Biblical on us with a line from Ezekiel about having a new heart:

That’s what we must pray for, each of us: a new heart. Not a heart of stone, but a heart open to the fears and hopes and challenges of our fellow citizens. [...]

With an open heart, we can abandon the overheated rhetoric and the oversimplification that reduces whole categories of our fellow Americans not just to opponents, but to enemies.

People who wanted to hear the speech all wrong may have heard President Obama calling the five slain officers racists. They weren't listening. He was calling them the best Americans possible, for doing the difficult work of keeping our society based in law creaking right along. The way real Americans do.