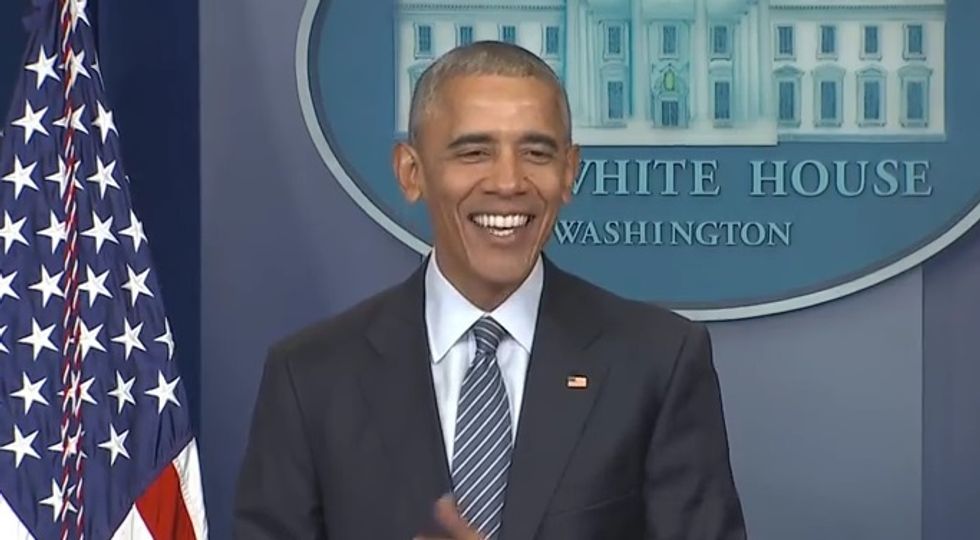 In his first press conference since last week's election, President Obama on Monday managed to remain fairly civil in talking about President-elect Donald Trump, not rolling his eyes, dramatically sighing at the stupidity of American voters, or even shuddering at the man's name even once. Obama emphasized the smooth, lawful transfer of power, even to a complete idiot, and carefully sidestepped questions about statements he'd made during the campaign calling Trump fundamentally incompetent and unfit for the job, either out of respect for the institution of the presidency, or to avoid unseemly bouts of giggling or sobbing.

Obama repeatedly noted that in the eight years since he was sworn in, his administration had restored the country from an economic collapse, leaving it in far better shape than when he entered office, with an implied warning to Trump: Things are pretty good right now. People will notice if you fuck things up:

As I told my staff, we should be very proud that their work has already ensured that when we turn over the keys, the car's in pretty good shape. We are indisputably in a stronger position today than we were when I came in eight years ago. Jobs have been growing for 73 straight months, incomes are rising, poverty is falling, the uninsured rate is at the lowest level on record, carbon emissions have come down without impinging on our growth, and so [...] my goal is on January 21, America's in the strongest position possible and hopefully there's an opportunity for the next president to build on that.

Obama carefully held back from attacking Trump's qualifications, repeatedly saying that the voters (or at least our insane electoral system) had chosen a new president, whatever his qualifications. He also repeated some advice he'd given Trump when they met last week:

Regardless of what experience or assumptions he brought to the office, this office has a way of waking you up and [...] those aspects of his positions or predispositions that don't match up with reality, he will find shaken up pretty quick because reality has a way of asserting itself.

Obama noted that Americans are quite aware of where the nation is right now, economically and politically, and that they'll see pretty quickly whether President Trump has made things better or worse, adding that governing is very different from campaigning: "You know, there are certain things that make for good sound bites but don't always translate into good policy. And that's something that he and his team I think will wrestle with in the same way that every president wrestles with."

The president also pointed out that the presidency comes surrounded by a lot of rules and laws, and that Trump won't be able to simply rush in and reshape the nation and its policies as blithely as Trump suggested in campaign rallies. That seemed aimed at reassuring Americans as much as it was advice for the Trump team. You might fantasize about cutting trade with Mexico, but once in office, there are a lot of realities that make that harder to do than it sounded while campaigning.

Mr. Obama even suggested that Trump's chimerical political positions could turn out to make the transition a little easier, especially since Trump may have to adapt to the realities of office:

I also think that he is coming to this office with fewer set hard-and-fast policy prescriptions than a lot of other presidents might be arriving with. I don't think he is ideological. I think ultimately is, he is pragmatic in that way. And that can serve him well as long as he has got good people around him and he has a clear sense of direction.

Do I have concerns?

Absolutely. Of course I have got concerns. You know, he and I differ on a whole bunch of issues. But you know, the federal government and our democracy is not a speedboat. It's an oceanliner, as I discovered when I came into office.

Take, for instance, the Affordable Care Act, the repeal of which has been Republicans' Holy Grail. Now that they're in charge, they're going to have to think very carefully about whether it's going to be good for the country or for their own future electoral prospects to suddenly gut a program that's brought uninsured rates to record lows, and which has given over 20 million Americans better health care and economic security. He also noted that the ACA has reduced health care cost increases from before it went into effect, "which has saved the federal Treasury hundreds of billions of dollars." You sure you guys want to just throw all that out? The realities of eliminating the positive effects of the ACA ought to make Republicans think carefully before they come in with a wrecking ball. Silly Mr. Obama, like Republicans think carefully when they've got an ideological absolute to pursue! That never kept them from shutting down the government in 2013, after all. Still, he said, if they came up with a better plan that insured more Americans for less money and ran more smoothly, he'd "be the first one to say that's great. Congratulations."

Obama also reminded Trump and the Republicans that elections are coming in just two years, during which Americans may decide they don't like the direction the R's are taking the country.

He sidestepped a question about the wisdom of Trump's having chosen Steve Bannon, the head of an enthusiastically white-supremacist website, for a prominent role as advisor, saying only "it would not be appropriate for me to comment on every appointment that the president-elect starts making if I want to be consistent with the notion that we are going to try to facilitate a smooth transition." He did note, later in the press conference, that the people a president appoints reflect on the president's goals and agenda, and left that hanging for people to add together. As for Trump's temperament, which Obama had said while campaigning was fundamentally unfit for the presidency, Obama again went with only the most diplomatic criticism, saying again that "whatever you bring to this office, this office has a habit of magnifying and pointing out and hopefully then you correct for":

I think what will happen with the president-elect is there are going to be certain elements of his temperament that will not serve him well unless he recognizes them and corrects them.

Because when you're a candidate and you say something that is inaccurate or controversial, it has less impact than it does when you're president of the United States. Everybody around the world's paying attention. Markets move. National security issues require a level of precision in order to make sure that you don't make mistakes.

As yet another example, Obama looked at the Iran nuclear deal, pointing out that despite opponents' fears that Iran would cheat, even Israeli security experts agree Iran has abided by the agreement in its first year. So if you throw that out, no matter how much applause the promise got during the campaign, that's not going to make the world safer. It's going to give Iran a faster track to nuclear weapons. Similarly, on climate change, there's more to the effort to fight it than just last year's Paris Climate agreement, and we've proven over several years that "it's possible to grow the economy really fast and possible to bring down carbon emissions as well." So why would you want to reverse all that? The president refrained from pointing out you'd have to be an idiot to think global warming is only a myth. At the very least, he noted, with international agreements, once they're in place,

the tradition has been that you carry them forward across administrations, particularly if, once you actually examine them, it turns out that they are doing good for us and binding other countries into behavior that will help us.

It remains to be seen whether any of this will sink in for the president-elect, or if he'll decide blowing it all up would be more fun anyway. As for the really scathing critique of Trump, we'll have to wait until Obama has been out of office a few weeks and gets his memoir deal.