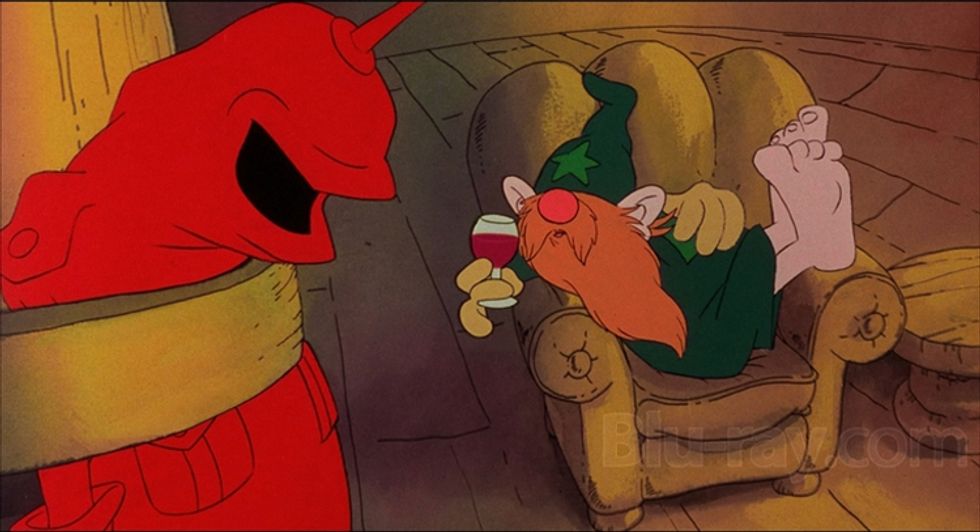 Just wake me up when the planet's destroyed.

The post-massacre consensus is in: Paris would be safe today if Barack Obama had the balls to say the magic words "Radical Islamic Terrorism." Or maybe it's that we can't actually win until he says them. Or until we elect another president who will say them. They are such incredibly powerful magic words that the president's refusal to say them suggests to some that he is in fact a Radical Islamic Terrorist himself, or so weak that he is unable to say them with enough magical force to roll a +20 killing hit against ISIS.

[contextly_sidebar id="P1mCRmDWikTfQEGdw3pRYooJVVnqedaV"]And since he refuses to actually lead America with the magic words, says New York Post columnist and Fox News contributor Michael Goodwin, then it's darn well time for Barack Obama to resign. Maybe he needs to call it a religious war like Lindsey Graham did in January. Or how about a Crusade? That would surely help.

Goodwin doesn't offer much specific proof that Obama's a failed leader, but he doesn't need to -- he's talking to New York Post readers, for god's sake.

President Obama has spent the last seven years trying to avoid the world as it is. He has put his intellect and rhetorical skills into the dishonorable service of assigning blame and fudging failure. If nuances were bombs, Islamic State would have been destroyed years ago.

He refuses to say “Islamic terrorism,” as if that would offend the peaceful Muslims who make up the vast bulk of victims. He rejects the word “war,” even as jihadists carry out bloodthirsty attacks against Americans and innocent peoples around the world.

[contextly_sidebar id="bZQBtAwjwYUzGOw9AyxZVu2AQISco2af"]Or maybe, as Obama has already explained patiently, calling ISIS -- or "Daesh," as the preferred administration term seems to be shifting to -- "Islamic" gives them a legitimacy they don't deserve. Just as the government presumably wouldn't agree that the "Christian Knights of the Ku Klux Klan" are a Christian group. But sure, maybe if he said "war" more often, instead of "fight" or "battle," then we'd all understand that ISIS is bad. It's almost as if the right hadn't noticed that we actually have been dropping bombs -- very un-nuanced bombs -- on Syria for over a year. If only we'd written the correct mystical incantations on them, they might have done more damage.

For the very little it's worth, Donald Trump agrees that the president needs to be much more adept in his deployment of Magic Words:

Maybe Obama needs to be willing to use the Cruciatus Curse, too -- though frankly, we're convinced that nothing will satisfy the Death Eaters in the Republican Party until one of their own is running the Ministry of Magic.

Having dealt with Obama's insufficient wizardry, Goodwin moves on to the outright lies:

In an accident of timing that captures his cluelessness, the president actually declared on Friday morning that Islamic State had been “contained,” practically boasting in a TV interview that, “They have not gained ground in Iraq and in Syria.”

What gall. What folly.

Except that maybe context matters? Not that the rightwing idiots give two shits for nuance (except of course when Ben Carson explains that he wasn't really selling quack medicine), but Obama never said that that ISIS was no longer a threat. As White House deputy national security adviser Ben Rhodes explained on ABC's This Week Sunday, Obama was talking about "containment" only in terms of geography:

A year ago, we saw them on the march in Iraq and Syria, taking more and more population centers. The fact is that we have been able to stop that geographic advance and take back significant amounts of territory in both northern Iraq and northern Syria. At the same time, that does not diminish the fact that there is a threat posed by ISIL, not just in those countries but in their aspirations to project power overseas.

But let's see what Obama actually said. Roll 212! In an interview with George Stephanopoulos the day before the Paris attacks, Stephanopoulos asked whether ISIS was "gaining strength." Obama disagreed:

Well, no, I don't think they're gaining strength. What is true is that from the start, our goal has been first to contain, and we have contained them. They have not gained ground in Iraq. And in Syria they'll come in, they'll leave. But you don't see this systematic march by ISIL across the terrain. What we have not yet been able to do is to completely decapitate their command and control structures. We've made some progress in trying to reduce the flow of foreign fighters."

[contextly_sidebar id="WPnk6jcNoyjpOKqqpLB5XtB57w6aeXLp"]That sounds like a pretty realistic assessment of what's happening with ISIS, and a hell of a lot more accurate than some other recent presidents' men who kept insisting that the "tide had turned" in Iraq ... or that victory was right around the corner ... or that the insurgency was in its "last throes." But that was Leadership, because Dick Cheney was tough, and Obama's accurate assessment doesn't talk about kicking ass enough.

In any case, it's time, says Goodwin, for Barack Obama to stop denying reality, what with all its nuances, and commit to more powerful magic. "He must either commit to leading the free world to victory, or step aside so someone else can." Honestly, we have no idea why Goodwin thinks Joe Biden would be any more hawkish; maybe Obama could simply appoint Ted Cruz president and be done with it.