Basil Marceaux's Exploiters Staged a Debate, and It Made Lincoln-Douglas Look Like a Conversation Between Two Retarded Baby Pandas 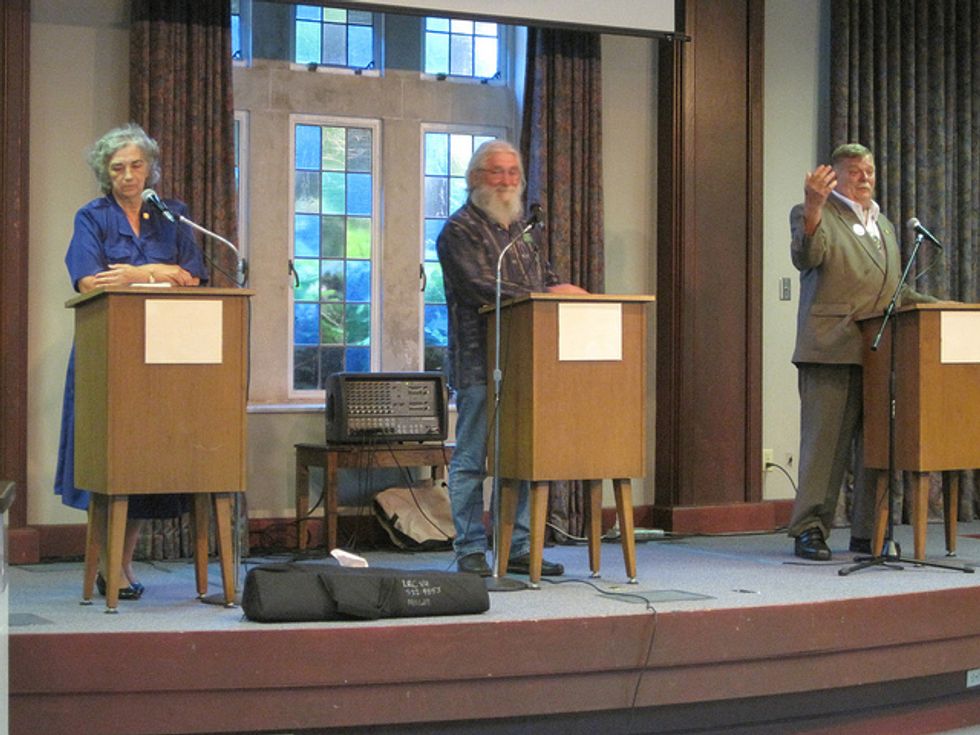 THERE HAVE BEEN GREAT MOMENTS IN THE HISTORY OF AMERICAN RHETORIC. Yet there has been only one occasion of pure, unadulteratedgenius. That's what happened last night: a debate staged between the Internet's favorite Tennessee gubernatorial candidate, Basil Marceaux, and two other crazies.

After Marceaux became a viral hit, you see, a guy named James Crenshaw and some other people decided they wanted to be his campaign staff. Why would any sane people do this? It seems to us that they perhaps want to exploit him. America is fun like that! These ruffians are filming a "possible documentary" about him, your Wonkette has been told, and they put up the videos on this YouTube account, apparently to try to manufacture a sustained Internet interest in their subject. And Wednesday night, the night before today's Tennessee gubernatorial primaries, this "staff" staged this magnificent debate at the Scarritt-Bennett Center's Harambee Auditorium in Nashville. A Wonkette operative WITNESS TO HISTORY was there to provide us a full account of the sublime experience.

In addition to the video above, a Flickr set has been circulating among Basil watchers. It's worth checking out. There are some pictures and fun videos of Basil and the other candidates and his "staff" of cameramen.

And now, allow your eyes to bleed as you read this glorious account:

Okay! Just got back from a gubernatorial debate between Basil Marceaux, Crazy June Griffin and Green Party candidate Howard Switzer here in Nashville. James Reesor was invited but declined and the entire thing, as you may expect, was a fucking CIRCUS. Really, I'm not sure where to start because I'm still trying to wrap my head around what just happened.

As for the campaign... I'm all about making fun of shit, but this is just sad. Still not sure how the campaign manager came upon the job, but the his name is James Crenshaw. He's in a back brace and uses a cane to get around because he fell off a balcony one night at a party. At any rate, he took over the campaign after the original video aired on WSMV, put together a team of cameramen and they're following Basil around shooting footage for a possible documentary. One of the other guys is a local DJ named Pimp Daddy Supreme whose real name is Shane Martin.

Basil thanked James and the staff for the support and called James up on the stage at the end to thank everyone for coming since I guess he was the one who organized it. [James] told the story about how he had the accident that put him in the back brace and ended up with too much time on his hands, so he decided to get involved in politics. Then Crazy June Griffin prayed for the all the athiests and everyone milled around a bit. James kept telling the cameramen to "stay on Basil" and make sure they caught everything.

Basil was talking to everyone and asking for us to mail him pictures ("The hard copy, not like the Twitter copy because Twitter is on paper.") He kept telling everyone he was famous in Hollywood now, and he was really proud of it. At one point, he pulled out three giant magnets that he has on his truck that probably say outrageous things about traffic stop slavery, and his campaign people ushered him off to a corner with better light to show them off and talk about them on camera. Basil was almost falling over trying to get the magnets spread out on the floor and hasn't slept in days.

He seems to really have no idea people are making fun of him in this way. I'm pretty sure his staff is just telling him that people are making fun of his morals and stances and he needs to stand up for what he believes in. He's just sort of a sad old dude that a bunch of people decided to pick up and exploit. Meanwhile, Crazy June Griffin took over the piano in the corner and played repeated loud renditions of God Bless America until she realized no one cared and stomped out. See? Circus.

So anyway! The debate. For starters, they tried to open with the Pledge of Allegiance, but Basil refused to say it to the flag that was on stage because it had gold fringe (one of his platforms, remember?) They delayed the debate while they tried to find another flag, but in the end, he just left the room during the Pledge. Then he came back in and everyone had to repeat the Pledge to a picture of the American flag on someone's CELL PHONE in the corner of the room.

With that finally out of the way, the debate got started and to be honest, I couldn't follow 95% of what Basil was saying. He did manage to cover slavery at traffic stops, the Mexicans, Indians and flags with fringe. He frequently went off on tangents and then later asked to re-answer the questions because he was sleep-deprived and hadn't slept since Monday. He asked for some water and Howard Switzer let him drink from his water bottle while Switzer's campaign manager/wife (maybe?) hollered at him to wipe the rim when Basil was done drinking. Switzer was incredibly gracious the entire time and June Griffin just sort of fumed when she wasn't answering questions.

Basil kept running overtime on his questions because no one made him any signs to tell him how much time he had left, which led to a several-minute spat with the moderator and other candidates and he concluded that at the next debate, they'd bring signs and food. He covered a pretty wide array of topics from slavery at traffic stops to kicking all the non-Christians out of the government to legalizing marijuana. Another highlight would be when the discussion turned to immigration and Basil said that if he were governor, he'd round up everyone who looked Mexican and ship them back across the border. Then if they had a green card, they could come back. Most of his answers made even less sense than everything he's said on TV and on his website. He literally fell asleep at the podium between questions also.

Things got really interesting when June Griffin went on a passionate tirade about Native Americans and how they ruined the country until we civilized them. The audience went absolutely apeshit on her. That's when the entire thing really started to fall apart, I guess. Basil rebutted by sticking up for the Indians and how they came from Asia and Greece to found our country and they're our brothers and sisters and he wants to have them over for Thanksgiving dinner. Actually, he said, if he were governor he would cancel Thanksgiving because there should be no Thanksgiving without the Native Americans at the table. This is the point at which June Griffin's Crazy completely eclipsed Basil's nuttery and somehow he actually started to look pretty good. Poor Howard Switzer hung out in the middle and seemed to be about as uncomfortable as the rest of us.

There's probably too much to try to relay, but there were some golden quotes from Basil (such as "I'm like MacGuyver, I'm gonna put down traps for the Mexicans....they're coming too fast!" and "I'm not gonna let them pass a law making women go topless... If you want me federal government, come see me! I'm a Marine, I deserve a flyover.") The entire thing was hilarious, but then I came away feeling like I'd just kicked the shit out of a handicapped kid on the playground.

Thanks as always, Wonkette operative. But also thank you, Basil Marceaux. Hopefully these evil hip-hoppers will go away after your primary victory tonight and stop filming this skateboard-trick video about you, as THEY CAN GO FUCK THEMSELVES. And then you will be free at last from the shackles of traffic-stop slavery. FREE AT LAST!