Be Right Back, Have To Murder This Bernie-Or-Buster 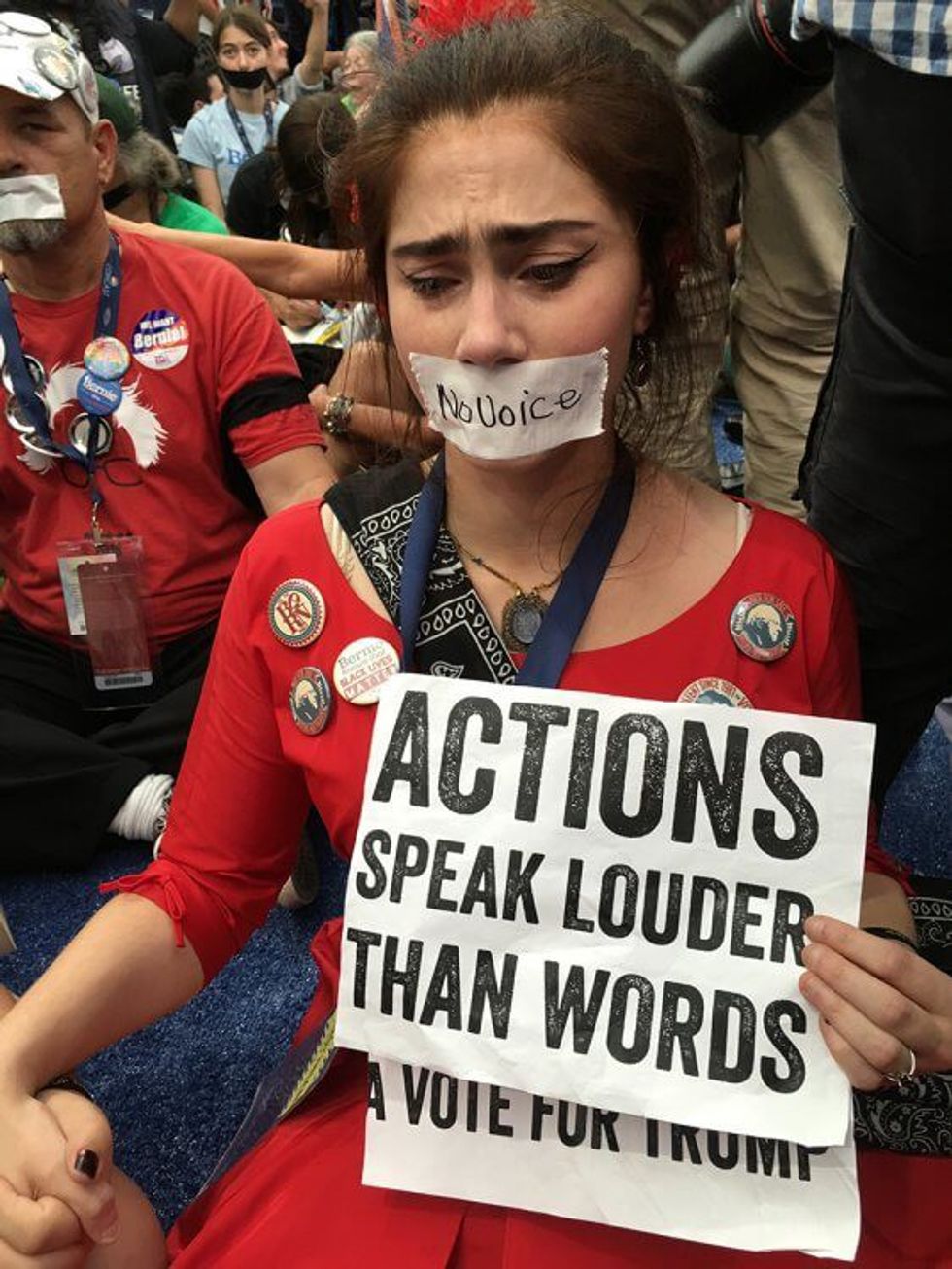 Perhaps you already took our advice not to go on Facebook today and pick fights with every single lefty friend who is currently blaming the Democrats for not ignoring the will of primary voters and nominating Hillary Clinton instead of everyone's beloved old Bernie.

But we forgot to say anything about going on Twitter.

Today we found the most spectacularly enraging piece we could possibly have imagined, from a young woman, "Spats McGee," explaining we need to make common cause with the Trumpers to #draintheswamp, as if any Trump voter anywhere is going to vote against Jim Lankford, or John Cornyn, or any other man who has worked to fuck the poor every day of his life.

We need to understand the Trumpers, she says, and that they are poor, and sure, they're racist, but it's because of their lives. It's titled "BERNIE FAM: We need to reach out with love to Trumpers."

It is time for a national conversation. About what? About how Trumpers are real people deserving our compassion. They’re ordinary Americans, just like you and me. And Americans are in pain; they’re struggling and suffering. They’re sick and tired of the status quo. Trump won because once Bernie lost the nomination, he was the only candidate saying ENOUGH IS ENOUGH. Berating and dehumanizing them does NOTHING; by doing so, we are punishing them for a symptom of a disease they never asked for and which we share as a people.

Hey, I know some Trumpers! My mom's neighbors, Orval and Shirley, whom we love!

Orval and Shirley are good people. They're fun! But you know what, idiot Medium writer? Shirley's been real sick lately. My mom took her to the ER last week, when she was coughing up blood.

Real soon, SPATS, things are going to get measurably worse in the lives of the Orvals and Shirleys, and the Laquandas and DeRons, and the Rebecca Schoenkopfs and the Spats McGees.

In the Jacobin-magazine-style Left, identity politics -- that is, caring about what happens to our brothers and sisters of color -- is treason to Socialism, because it posits that there are things equally and or more important than "the revolution." No, it doesn't make any sense to me either. Let's let this fucking idiot try to explain:

Now it’s time to enact what Hillary and the elites paid lip-service to, but their unmitigated bashing for the past 16 months betrayed: #StrongerTogether. It’s time for Americans to unite—except, not in the way that neoliberal identity politics wanted. Muslims, African Americans, and undocumented immigrants are wholly deserving of our compassion, and we must as a people rise up to ensure that they are afforded the same dignity and respect as ourselves. But in our haste to defend the scapegoats, it is imperative that we cultivate the same level of compassion for those scapegoating them—for their scapegoating is stirred up by the frustration and lack of a better explanation for their lived experience.

Ok, so Hillary paid "lip service" to unity. She did this by coming up with policies that would help the vast majority of Americans, and continued and expanded programs for the poor and middle class, but fuck her. Instead, let's work with the people who are creaming themselves to outlaw WIC, and food stamps (EBT), and the Department of Education, and Social Security, and every other program of the social safety net, so that the rich could get a 10 percent drop in the corporate tax rate.

Hint, person who doesn't like "neoliberal identity politics": white people get those too!!!!!

It is good to know, though, that the people screaming "nigger" at this fucking saint deserve as much compassion as he does!

Look, I get that Hillary Clinton is the devil because she is part of the Democratic Party, and man, it's the worst and did not even let Bernie win even though the Millennials voted for him and their votes should count more than seniors' and blacks'! She took money from banks to give speeches! She didn't vow to destroy capitalism! (Hint: neither did Bernie.) And now the lives of every poor or almost-poor person in the country will be so much worse. Along with all the people whose "dignity and respect" needs some defense today, as they're all getting threatened by white thugs on dope (who just need love too).

I know you're not regretting your Jill Stein vote or whatever today, Spats McGee. I know because I didn't regret my Nader vote until Inauguration Day 2001, when George W. Bush's first act was to rescind Bill Clinton's executive order on arsenic in drinking water.

There was no real difference between Gore and Bush, I said -- LOLOLOLOLHACKCOUGHVOMIT -- and you won't realize for another 70 days or so that you just handed the keys to the kingdom to men who didn't just take money from Wall Street to give them speeches about women's rights, they are actively waiting to transfer all remaining rubles from the poor to the already obscenely rich, and let the police departments take care of black people like the good old days, and every other thing that is bad for children and other living things that you can imagine. They are bad people -- oh, maybe not all the ones who voted for them, but the ones those voters put in charge. And there will be nothing and no one to stop them. And they don't care about draining your swamp or what the fuck your problem is with the DNC.

But you got to have your spiteful tantrum, and Jill Stein's votes succeeded in throwing Michigan and Wisconsin to Trump, full stop. Bernie Sanders is mad at you, sure, but what does he know? HE IS OLD, LIKE A COMMON HILLARY VOTER!!!!

Good luck on the revolution! Oh, wait, you don't have any guns? Your revolution is ... on Twitter? But you succeeded in taking down the worst criminal of all ... Hillary Clinton?

Oh honey. Thanks from all of us.