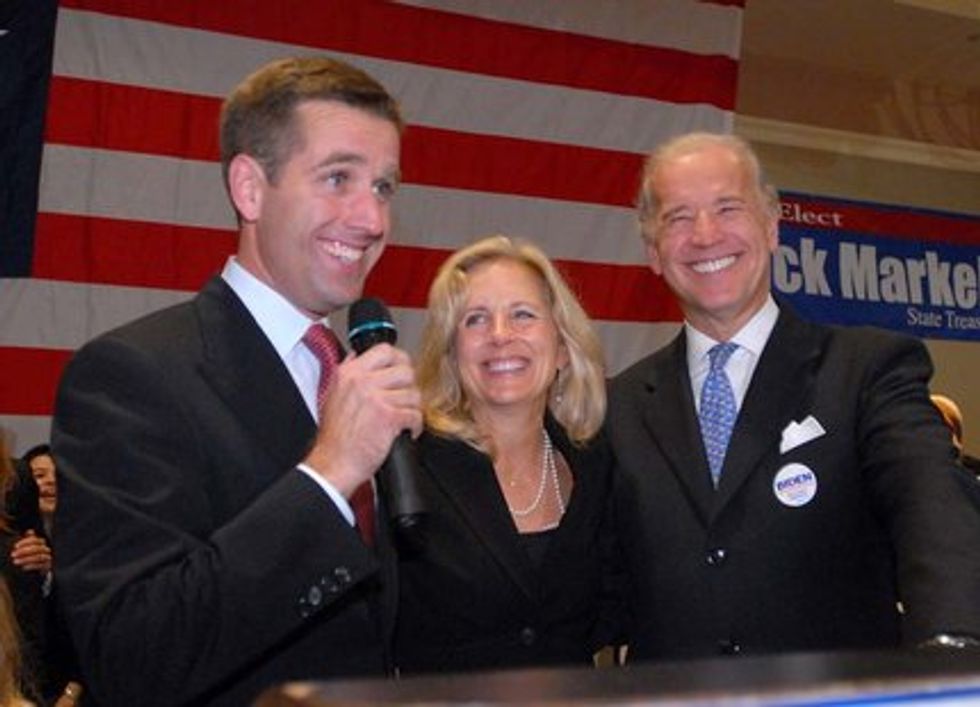 Beau Biden, former Delaware attorney general, Iraq War vet, and son of Old Handsome Joe Biden, died of brain cancer Saturday in Washington DC. He was only 46, and had announced in April 2014 that he planned to run for Governor in 2016.

Biden had been receiving treatment at Walter Reed National Military Medical Center for over a week when he passed away. Yr Wonkette extends our sympathies to Beau's family: mother and father, Dr. Jill Biden and Vice President Joe Biden, to Beau's brother, Hunter, and sister, Ashley, and to Beau's wife Hallie and their two children, Natalie, 11, and Hunter, 9.

And may we also just take a moment to say fuck cancer?

Beau was the oldest of OHJB's children, and along with his brother Hunter survived the 1972 car accident that killed Joe's wife, Neilia, and his one year-old daughter, Naomi, just weeks after Joe had won his first term in the U.S. Senate. The New York Times cites Beau's speech introducing his father at the 2008 Democratic National Convention, in which Beau described the aftermath of the crash:

“One of my earliest memories was being in that hospital, Dad always at our side. We, not the Senate, were all he cared about,” Mr. Biden said. “He decided not to take the oath of office. He said, ‘Delaware can get another senator, but my boys can’t get another father.’ However, great men like Ted Kennedy, Mike Mansfield, Hubert Humphrey — men who had been tested themselves — convinced him to serve. So he was sworn in, in the hospital, at my bedside.”

We've always admired Joe Biden's strength in going on after that loss, and wish like hell that he didn't have to face another child dying. Let us once again say, fuck cancer.

You know, just in case you needed to cry a bit more.

In a statement released by the White House, President Obama said,

Beau took after Joe. He studied the law, like his dad, even choosing the same law school. He chased a life of public service, like his dad, serving in Iraq and as Delaware’s Attorney General. Like his dad, Beau was a good, big-hearted, devoutly Catholic and deeply faithful man, who made a difference in the lives of all he touched -- and he lives on in their hearts.

Joe is one of the strongest men we’ve ever known. He’s as strong as they come, and nothing matters to him more than family. It’s one of the things we love about him. And it is a testament to Joe and Jill -- to who they are -- that Beau lived a life that was full; a life that mattered; a life that reflected their reverence for family [... ]

“I have believed the best of every man,” wrote the poet William Butler Yeats, “And find that to believe it is enough to make a bad man show him at his best or even a good man swing his lantern higher.”

Beau Biden believed the best of us all. For him, and for his family, we swing our lanterns higher.

Next Sunday is Father's Day. Hug your dad, or your sons and daughters, for Beau Biden. And consider sending a few dollars to the Cancer Research Institute or the Memorial Sloan-Kettering Cancer Center, both of which have "A" ratings from Charity Watch. Because, as we say, fuck cancer.