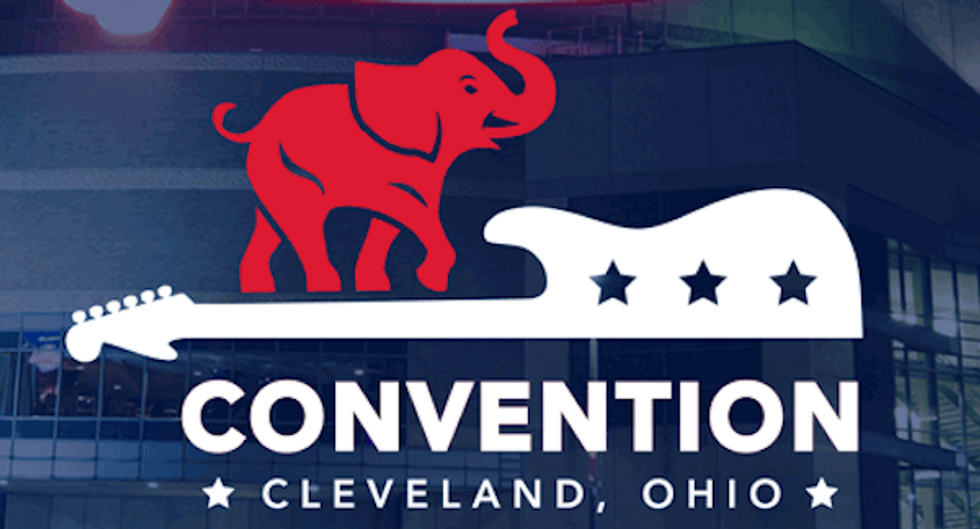 Nothing says "ROCK AND ROLL" like a Republican convention.

Yesterday, the Trump campaign released a list of people who were supposed to speak at next week's Republican National Convention. This list included a fella named Tim Tebow, who I am told is a sportsball player who is really into Jesus and stuff, and also Ivanka Trump's rabbi, Rabbi Haskel Lookstein. They will no longer be participating, but for different reasons!

The thing with Tim Tebow -- other than the fact that one time Trump spent a bunch of his charity money on a sportsball signed by him -- is that no one ever actually asked him to speak at the Republican convention in the first place. They just announced that he would be doing that, and he was as surprised as anybody when he got home from the Philippines to hear that he was scheduled to speak in the Cleve for the Convention!

Tebow says "It’s amazing how fast rumors fly, and that’s exactly what it is, a rumor." (There is a difference between "a rumor" and "a list put out by the Trump campaign" ... or maybe there isn't!) Then he goes on some weird tangent about "One Nation Under God" and how god has a plan for your life and whatnot, and it gets a little uncomfortable, TBH.

The thing with Ivanka's Rabbi? Well, it seems as though he has absolutely no idea about what he had even agreed to do in the first place. He says he had accepted her invitation to speak at the convention “out of respect for her and our relationship,” but has since backed out upon discovering that it would be a political convention.

“Unfortunately, when my name appeared on a list of speakers at the convention, without the context of the invocation I had been invited to present, the whole matter turned from rabbinic to political, something which was never intended.”

When his name was released on Thursday with the other speakers, Jacob, a former student of the Ramaz School, an elite Jewish prep school where Lookstein was once headmaster, started a petition to convince him not to.

"Donald Trump openly spouts racist, misogynistic rhetoric; he advocates torture, the expulsion of millions of families, some long settled in America, and insinuates that some citizens of this great country are somehow less than others.

To embrace Trump and Trumpism goes against all we’ve been taught. As graduates of Ramaz, and as current or former members of the Modern Orthodox community, this is a shanda beyond the pale."

It also noted Trump's reluctance to reject the anti-Semitic leanings of his followers.

When Donald Trump was asked about David Duke, Trump said he didn’t know anything about the guy. When a Jewish reporter wrote an article about Trump’s wife, white nationalists sent her death threats and Photoshopped pictures of her at Auschwitz. Wolf Blitzer asked Trump point blank to condemn the threats; Donald Trump just shrugged.

Rabbi Lookstein, do you also shrug in the face of virulent, violent anti-Semitism? Do you also believe that ten million Mexicans should be deported? Do you really want your grandchildren to grow up in a racist fantasia in which we will somehow construct “the wall”?

The petition garnered over 800 signatures in a half a day, from former students and members of the Modern Orthodox Jewish community.

Rabbi Lookstein says that he had intended to not give a political speech, but rather a prayer condemning bigotry. Which does not seem like it would so much fit in with the theme of the TrumPence campaign:

“We thank you for our constitutional government that has created and fostered the American ideals of democracy, freedom, justice and equality for all, regardless of race, religion or national origin. Almighty God: We know that we are living in very dangerous times, when all of these blessings are threatened from without, by forces of terror and unimaginable brutality, and from within, by those who sow the seeds of bigotry, hatred and violence, putting our lives and our way of life at risk.”

Yeah, um. That whole "regardless of race, religion or national origin" thing doesn't seem to fit in so well with the Trump campaign anyway, given that his whole schtick is yelling about Muslims and Mexicans. So maybe this is for the best!

Sarah Palin: It's Obama's Fault My Drunk Son Punched His Girlfriend, For America

Now, we already knew that our beloved Sarah Palin would not be attending this shindig, but there may be a reason why, other than the fact that Alaska is a far away land. Little Green Footballs blogger Charles Johnson points out that Track Palin has been remanded to jail for unknown reasons related to the domestic violence charges filed against him in January, when he got drunk and beat up his girlfriend. So Sarah probably wants to hang at home and yell at Barack Obama some more.

Given that all of this has gone down and the convention hasn't even started yet, surely we can all look forward to even more exciting shenanigans once the festivities commence! Get your popcorn ready! (And don't forget to let Evan buy you a beer.)