Ben Carson Begs Media To Stop Killing Him So Much 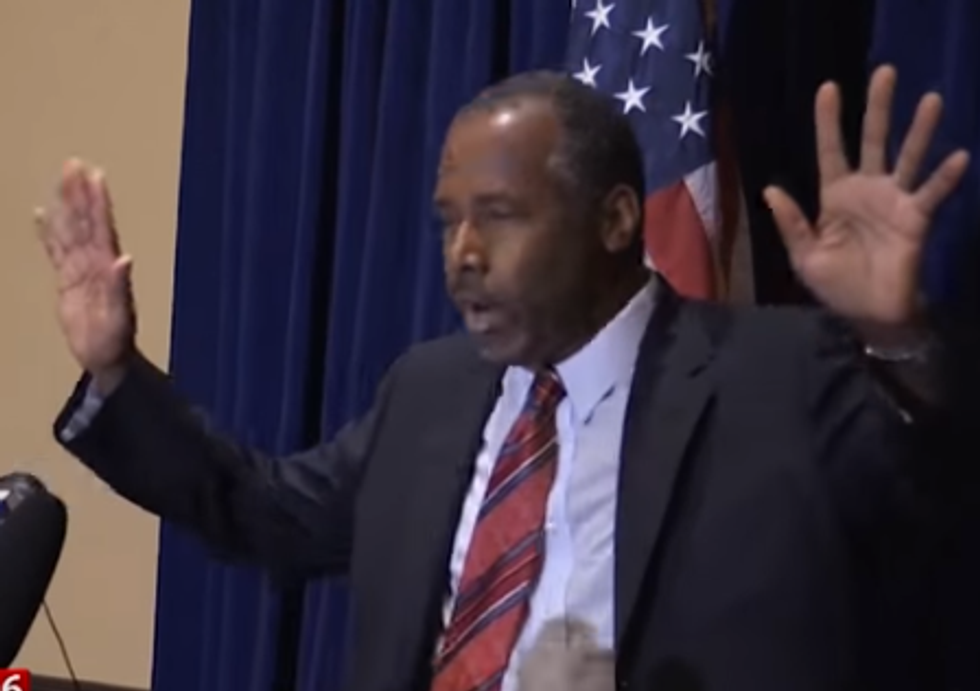 CUT IT OUT YOU GUYS!

[contextly_sidebar id="a4l9KlHSrfsWH7VOR2JuUKefxh3P7XNs"]Poor Ben Carson! His campaign is broken, his brain is broken, EVERYTHING IS BROKEN. He was supposed to be riding high right now, hopping, skipping and jumping through all the Popeyes Organizations in America, high-fiving robbers as he raced to the finish line at 1600 Pennsylvania Avenue. At least that's what God told him was going to happen. Instead, he is losing so hard, and he knows why: Because the media has been trying to murder him.

[contextly_sidebar id="RqfERbxx6MzwCrIawLhsWEUCfBqyDtwa"]He explained this to wingnut radio host Sam Malone, who is NOT the same as the character from "Cheers," so don't worry! He's already been 'splaining how the Senate can avoid doing its job of even holding hearings for Obama's eventual nominee to replace old pillowhead on the Supreme Court. Now, he's encouraging Republican senators to look to him for inspiration on how not to get murdered by the media in the process:

I’ve been withstanding continued attacks from the mainstream media since I threw my hat in the ring. Even before that, they’ve been trying to kill me. I’m still here.

The radio host LOLed and agreed, and then told Carson he has a great "bedside manner," because we guess they were doing the interview in bed. Carson continued explaining how the media murders him so much by quoting him verbatim:

They never talk about any of the good things that I talk about. From the debate, all they can talk about, they say, ‘He got this false Stalin quote.’ The fact of the matter is, the quote is very close to the thing that he said, and if you go and find the actual quote, which is findable, you’ll see that I am completely dead on target for what he was talking about. But you know they try to ridicule and say, ‘He doesn’t know what he’s talking about,’ because they obviously are terrified of me.

So, so scared. Right Wing Watch explains that, of course, Stalin didn't say anything like Carson claims, but that it's a fake quote that rightwing idiots share on Facebook. Still, it's super unfair to make fun of him for that. What does he know? He's just a lowly brain surgeon.

Tell us another sad story about being murdered by the media, Dr. Carson:

Twenty years ago I was giving a private talk about things in the Bible, and how would the Egyptians able to store grain for seven years. And I said, you know, if you could put them in a hermetically sealed area, sort of like a pyramid, that could work. And you know somebody went back, found that, and they try to make it seem like that's a major tenet of who I am, grain and pyramids.

[contextly_sidebar id="hsudj2G51QYWDY05Yw1fxrEBKUtpJpXQ"]But we must fact check Carson's recollection of what he actually said about pyramids, and how do they work. He said, and we quote:

My own personal theory is that Joseph built the pyramids to store grain. Now all the archeologists think that they were made for the pharaohs’ graves. But, you know, it would have to be something awfully big if you stop and think about it. And I don’t think it’d just disappear over the course of time to store that much grain.

He didn't say oh maybe a pyramid MIGHT be a good place to house all the Wonder Bread in the Bible. He said his PERSONAL THEORY about why Joseph and his Amazing Technicolor Dreamcoat built some pyramids was to store all the grain.

[contextly_sidebar id="Ta36cnRnAPB68f2EkGGCujlAdJ3zPZkh"]But uh oh, here we go again, media-murdering Ben Carson by transcribing his words and making fun of them. The same way we did when he said, "Putin is a one-horse country. Oil and energy." Why don't we focus on all the totally smart things he says about how Israel's system of government is sooooo confusing and how he stabbed so many people when he was a child, but he can't remember precisely who the stabbing victims are? Oh wait, those are more stupid things he has said, our bad. Why don't we talk about how he was offered a MASSIVE scholarship to West Point, except for how that was a total lie? Geez, this is hard, trying to report the "good things" Ben Carson says.

Here is our vow to you, Ben Carson, from yr Wonkette: The second you say something smart, we will report it.