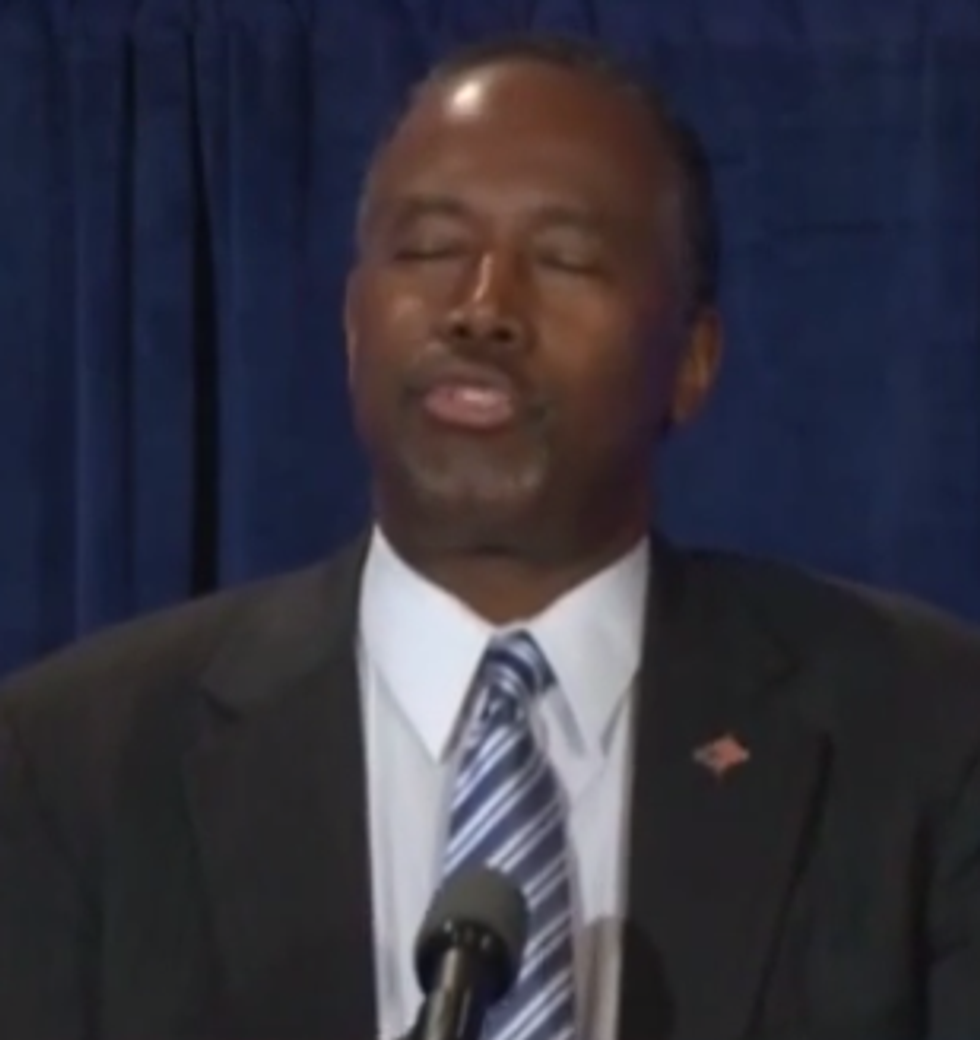 Know all that stuff about how presidential candidate Ben Carson is the Best Neurosurgeon Ever, and how he did the first successful operation to separate twins conjoined at the head? Well, he never would have done that if he hadn't cheated OFF OUR LORD AND SAVIOR JESUS during one of his chemistry finals. Oh yeah. He's that kinda guy. Carson admitted all of this at the National Day Of Prayer gathering Thursday, regaling the crowd with a tale about how, when he was at Yale, he thought he was "pretty hot stuff," but then everything went wrong with this one chemistry final:

"My grades were so bad that even if I had gotten an 'A' on the final, I still would have failed. That's how bad it was. But the professor was either very compassionate or very sadistic, I'm not sure which one, because he had a rule, he said, 'anybody who's failing, I'll give them double credit on their final' ... so there I was, night before, thinking about my life, I said 'Lord, medicine is the only thing I ever wanted to do. I always thought that's what you wanted for me, and yet, it looks like I'm going to fail chemistry, I'm not gonna go to medical school.'"

So Carson asked the Lord for a miracle, and he decided to stay up all night studying, right up until the point where he fell asleep. And wouldn't you know it, there God was, in his dream, giving him all the answers to the test!

"Dreamed I was in this large auditorium, just me and a nebulous figure working out chemistry problems [Ed: The Christ, the One the prophets foretold???], and I awakened early that morning and that dream was so vivid in my mind. I picked up my book, I started looking up the stuff that I dreamed about, and when I went to take the test the next morning it was like The Twilight Zone! I opened that book and I recognized the first problem, it was one of the ones I dreamed about! And the next and the next and the next, and I aced the exam! And you know, got a good mark in chemistry!"

Carson closes by saying that he "promised the Lord He would never have to do that for me again." Which, you know, is good, because the Bible is very specific about how frequently God is willing to answer those sorts of prayers.

Now you might be saying "NO FAIR, cheating off the Lord like that," but look. The professor might have said the final was not open book, but he did NOT say that opening your heart to the Lord, so that He may do the test for you, was banned. So it's all good.

And maybe that's how Carson was able to pull off that super-tough conjoined twin surgery, you don't know. Maybe Carson lied to Jesus when he said he wouldn't do that kind of prayer again. Carson probably stayed up all the night before, reading about how to cut two heads in half, FELL ASLEEP AGAIN, and then woke up like "Aw NUTS! I'm never gonna do this surgery good!" But then he was like "Jesus take the wheel!" and instead He took the scalpel and now Ben Carson is where he is today, sayin' dumb shit and about to lose a presidential election. Praise the Lord!