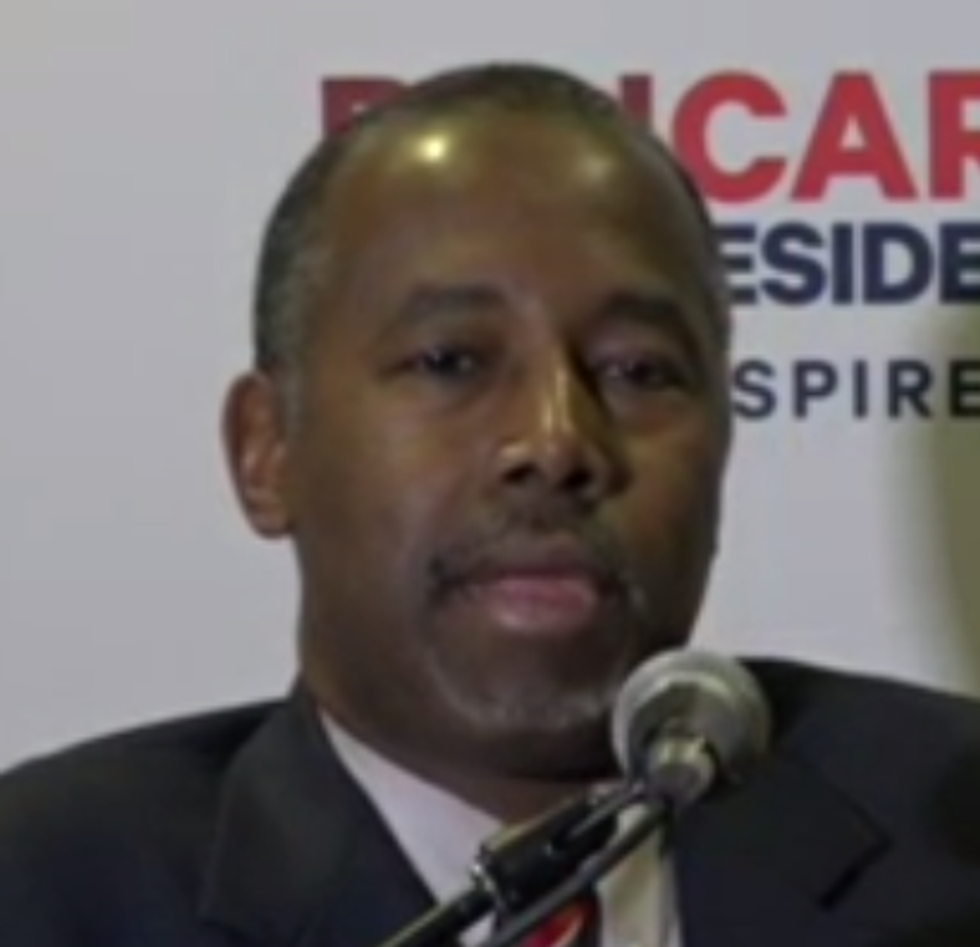 Oh Ben Carson, your brain needs another operation. We learned just recently that the esteemed presidential candidate's advisers have been having a mighty tough time re-programming his brain to be un-stupid about foreign policy, and it showed yet again in Nevada on Tuesday. What was Ben Carson supposed to Never Forget about 9/11? Oh yeah, it was all those Muslims hanging out on the Jersey shore, just partying it up because they were so excited about the towers coming down. Dr. Carson did not approve of the Muslims misbehaving like that:

There are going to be people who respond inappropriately to virtually everything. I think that was an inappropriate response. I don't know if on the basis of that you could say all Muslims are bad people. I really think that would be a stretch.

A reporter cuts in to clarify that he's talking about NEW JERSEY, the stinky place in America that contains Newark. Carson says, "Yes." Another reporter asks, "And where did you see this film, Dr. Carson?"

And yes, there was a pause between "news" and "reels," as if his brain was buffering like a YouTube video on your mom's AOL.

Anyway, so there Ben Carson was on 9/11, watching his News ... Reels, and he saw Snooki on the Jersey beach, and a bunch of Muslims ran across the screen making balloon animals and blowing those noise-maker-type things, and shouting "Death To America!" It did SO happen. Now granted, he was at the Popeyes Organization preventing armed robberies at the time, so maybe he misunderestimated his own memory.

Republican presidential candidate Ben Carson on Monday walked back the claim that he had seen highly disputed footage showing thousands of Muslims in northern New Jersey celebrating the collapse of the twin towers following the 9/11 terrorist attacks, releasing a statement just hours after his initial remarks to clarify what his campaign called a mistaken reference.

"He doesn't stand behind his comments to New Jersey and American Muslims," Carson spokesperson Doug Watts told ABC News. "He was rather thinking of the protests going on in the Middle East and some of the demonstrations that were going on in celebration of the towers going down."

New Jersey, the Middle East, what's the diff? Now, we for honest have to say this doesn't, in our estimation, rank THAT highly on the Ben Carson Dumbass Scale. This is the man who can't remember the 10 years he spent shilling for a quack cancer cure, and also can't remember whether he stabbed a person and left them to die, and if so, WHO WAS IT? Ben Carson the brain surgeon does not know.

He just made a mistake. Besides, Donald Trump says he seen the film in the newsreels too, even though it did not happen. It was probably the little known sequel to Carly Fiorina's favorite writhing fetus abortion film, Planned Parenthood 2: Bigger, Longer And Uncut. Trump ALSO says he watched people jump out of the twin towers out the window of his apartment, from FOUR MILES AWAY, so we expect Carson to one-up him by asserting that he remembers pushing some of those people any day now.

Sorry, we are probably liberal media-ing Carson right now, forcing him to look stupid. Here's another thing he "knows" about the FBI:

When asked about his recent claim that the FBI can only monitor between 30 and 60 people at a time, Carson qualified the statement by saying that’s the number of people the FBI “can follow 24/7, not just people on their watch list.”

When asked where he received that information, he said: “From television. The same place the president seems to get most of his information,” Carson said. He then turned the question on reporters: “So you guys better be accurate.”

Haha, he sure did ZING! the president right there, as if Obama's national security briefings mostly consist of eating bon-bons and watching Whoopi and Joy scrap during the Hot Topics segment of "The View."

Anyway, the point is Ben Carson shouldn't crib his talking points from the class clown. He should stick to taking his notes directly from God.