Ben Carson Has More Thoughts About Muslims. They Are Dumb, Racist Thoughts. 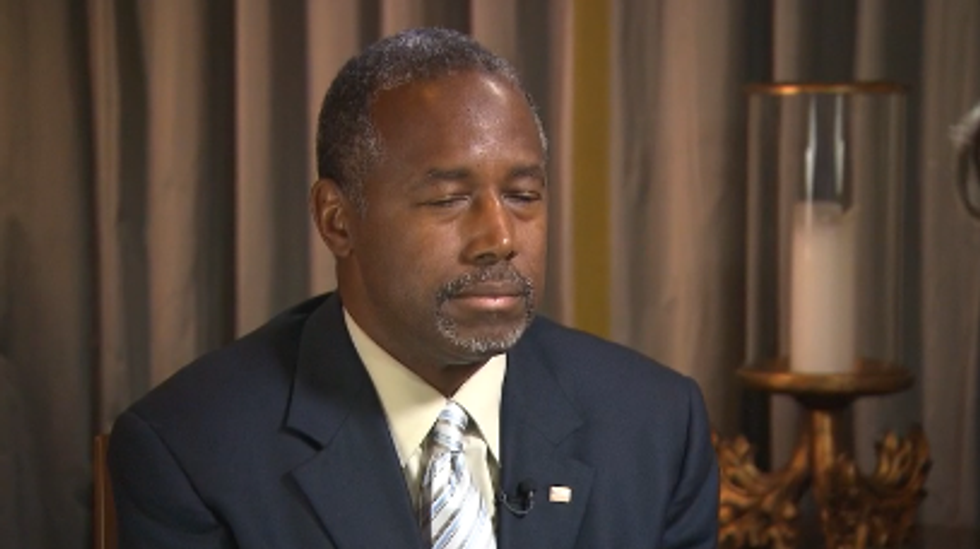 Wake up, dude, your mouth is saying stupids.

Last week, Ben Carson, who is currently just about tied with Donald Trump as the frontrunner for the Republican nomination, laid some of his doctorin' knowledge down about how we can't ever elect a Muslim president, because "Constitution" reasons. And this totally does not count as a "religious test," because the founding fathers obviously weren't thinking gross Islamics when they wrote the Constitution. You will be shocked to learn that, instead of saying, "Oops, I did not mean to say that, I better do some conjoined twin surgery on my own dumb brain," he's been doubling down on the derp, to as many people as he can. Let's see if we can't follow the bouncing dumbass!

First Carson said to the Facebook that it would be totally fine to have a dirty Muslim in the White House, as long as that person renounced Sharia law while swearing on the Bible. And Friday, during a speech at the Values Voter Summit, he sort of continued that theme and told all the sexually exhausted wingnuts in attendance that the media needs to take a pill and grow the fuck up, because he was NOT saying Muslims aren't ALLOWED to run for president, just that they shouldn't BE president:

"Not advocating they run for president in no way precludes them from running," Carson said at the Values Voter Summit, a Christian conference in Washington. He added that he wouldn't be able to disallow them from making a bid, but that he personally could choose not to "advocate" for them.

But then this weekend, it got ALL KINDS of weird, when Carson went on the news programs to explain w why he IS TOO right about the Muslims, and also he would like to say some more racist shit please. Let's start with his interview with Jake Tapper, on the CNN:

TAPPER: You seem to be singling out Muslims as individuals who automatically, as a knee-jerk, would put their religion ahead of the country. And I think that offended a lot of people including a lot of patriotic Muslims.

CARSON: I think the statement stands. Is it possible that maybe the media thinks it's a bigger deal than the American people do? Because American people, the majority of them, agree and they understand exactly what I am saying.

TAPPER: I've seen, I've heard from a lot of people who don't think Muslims can be patriotic who agree with you. But I don't know if I were running for president if I would want the support of people like that?

So he knows what's in their brains! Which leads to this scholarly explanation of Islam, from Carson:

CARSON: [Y]ou cannot, unless you specifically, deny [Sharia] be a Muslim in good standing. Now if that is the case, if you are not willing to reject that, then how in the world can you possibly be the President of the United States.

TAPPER: You are saying there is something specific about being a Muslim. You have to reject Islam to be president.

CARSON: You have to reject the tenets of Islam. Yes, you have to.

TAPPER: And that's different from an orthodox Jew or a devout Christian?

CARSON: If there is a devout Christian who is running and they refuse to reject the ideals of our Constitution, or they want to establish a theocracy, I cannot advocate for them.

Haha, Carson said he can't support presidential candidates who "refuse to reject the ideals of our Constitution." Freudian, maybe? It would be irresponsible not to irresponsibly speculate! Anyway, they bantered back and forth some more, and then Armstrong Williams, Carson's campaign manager, ended the interview because guess he was mad, bro.

And now let's look at what Carson told Martha Raddatz on ABC's "This Week." Does he have thoughts on refugees? SURE HE DOES! Should we profile them, just because they're Muslims? Well, he doesn't PERSONALLY want to do it, but if somebody gave him a good reason:

RADDATZ: Let’s imagine some of those [Syrian] refugees get into the United States. For authorities to track emails, cell phone calls, they usually need to have probable cause. Do you think in some instances, religion should be enough for probable cause?

CARSON: I personally don’t feel that way, but I would certainly be willing to listen to somebody who had evidence to the contrary. I think that’s one of the problems, we get to our little corners and we don’t want to listen to anybody anymore.

Ben Carson is the only candidate willing to listen to insane people who say maybe we should just discriminate against people because of their religious beliefs, as long as they're Muslims. But not Christians! That's different!

But come on, Carson is a NEUROSURGEON, which is the scientific opposite of A Idiot, so he knows all the things. Like how he knows how the brain is just way too complex to have evolved into the fully formed 747 it now is, so God musta did it. And he also knows Barack Obama is a psychopath, just by looking at his face. Carson knows this because of his medical training, even though he cheated off God all the way through college.

So when Carson says it's too risky to elect a Muslim president, because he or she would definitely change the whole country to Sharia law, which is the Muslim version of Kim Davis, we should listen. And those Syrian refugees? Well, just give him a good reason, and he'll be a REAL DICK to them.