Ben Carson: If The Jews Had Guns, The Holocaust Might Not Have Turned Out So :( 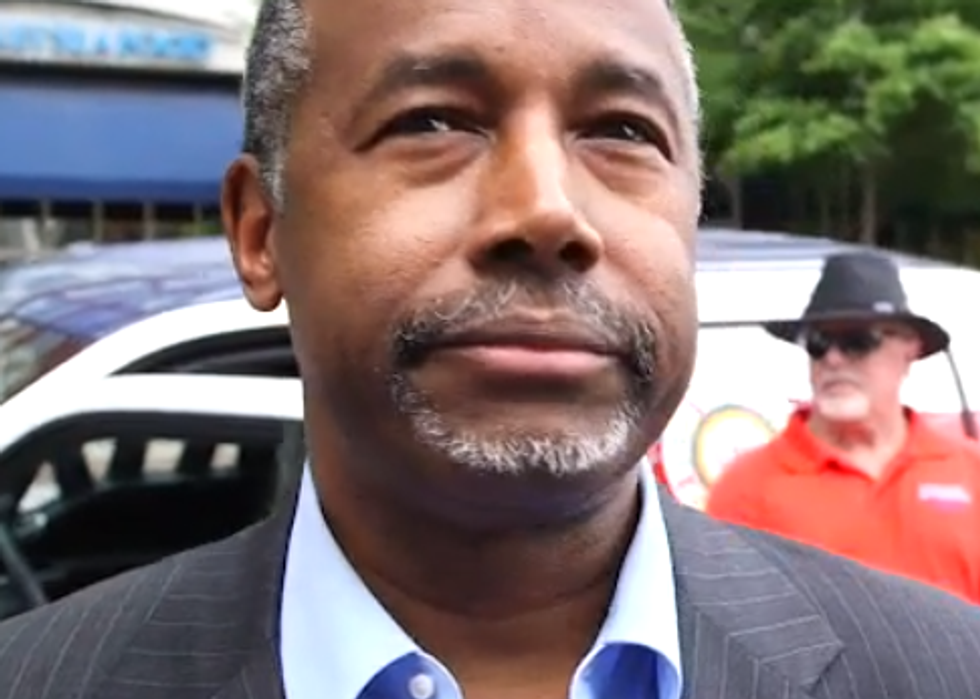 Ben Carson is apparently no longer content to tour American disaster sites, read the names off of memorials, and call all the victims pussies for failing to stand up to the bad guys, with guns. So now he has traveled, inside his broken brain, to the Europe of the 1930s and early 1940s, in order to drop some wisdom on all those Jewishes. Anne Frank, are you ready to write posthumously in your diary about this?

Republican presidential candidate Ben Carson has waded deeper into a row over gun control by claiming that Jewish people in Nazi Germany might have been able to prevent the Holocaust if they had been armed. [...]

CNN’s Wolf Blitzer asked him: “Just clarify, if there had been no gun control laws in Europe at that time, would six million Jews have been slaughtered?”

Carson replied: “I think the likelihood of Hitler being able to accomplish his goals would have been greatly diminished if the people had been armed … I’m telling you that there is a reason that these dictatorial people take the guns first.”

Carson added that he wasn't singling out the Jews of Europe, in particular, as people who just needed to do a little more shooting and a little less talking. But the Holocaust comparison is (!!!!!) offensive for a couple of reasons. For one, Jewish people with guns DID fight the Nazis:

In 1943, armed Jews in the Warsaw ghetto fought the Nazis. Jews killed about 20 Nazis, but about 13,000 Jews died in the uprising.

Oh. Also, too? Carson is repeating this fucked up, insanely anti-Semitic, COMPLETELY BULLSHIT right-wing myth that the first thing Hitler did after he came to power was confiscate everybody's guns, when the reality of the matter is that Hitler LOOSENED GUN LAWS for people who believed like he did, though he ultimately banned Jews from owning guns. Sort of like how the NRA and its wingnut Christian counterparts want every white Jesus-lover armed to the teeth, but aren't so keen on the idea when it's black "thugs" with guns.

As it turns out, the Weimar Republic, the German government that immediately preceded Hitler’s, actually had tougher gun laws than the Nazi regime. [...]

The 1938 law signed by Hitler that [NRA jizzbiscuit Wayne] LaPierre mentions in his book basically does the opposite of what he says it did. “The 1938 revisions completely deregulated the acquisition and transfer of rifles and shotguns, as well as ammunition,” [University of Chicago law professor Bernard] Harcourt wrote. Meanwhile, many more categories of people, including Nazi party members, were exempted from gun ownership regulations altogether, while the legal age of purchase was lowered from 20 to 18, and permit lengths were extended from one year to three years.

So maybe Ben Carson is saying Hitler was being NO FAIR and should have let everybody have equal opportunity access to guns, or maybe his brain is broken beyond repair and he doesn't know what the fuck he's talking about. (It's the "broken brain" one, that is the answer.)

But yeah, Ben Carson, that's the ticket. Jewish people who lived under the Third Reich, this is where you played your hand wrong, according to brain surgeon and 2016 American Republican presidential candidate Ben Carson. Next time you're being Holocausted by Hitler, try one of these:

Or maybe Ben Carson needs to STFU, is that possible? Could he do that? Asking for a Jewish friend.