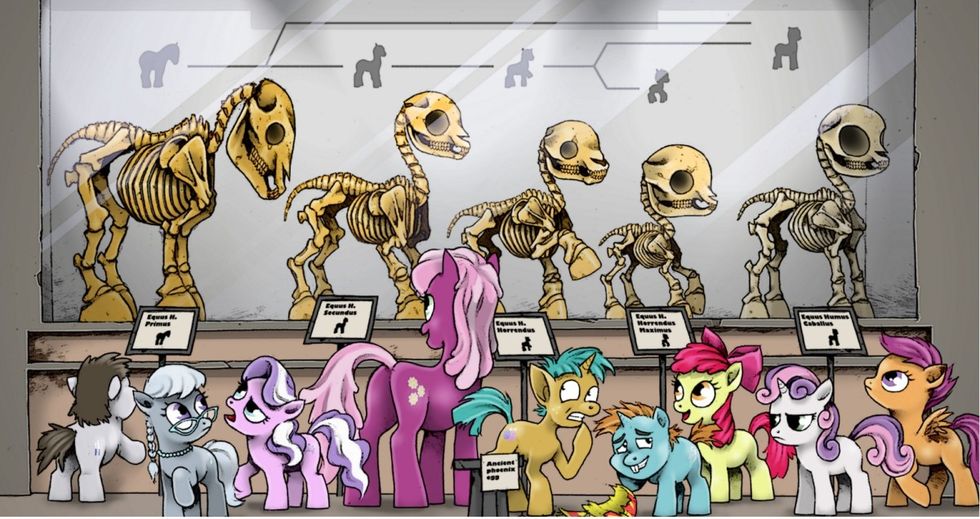 Those Neanderthal ponies are scary. The world of 1983 was primitive and brutal.

You may have noticed by now that, for a neurosurgeon, Ben Carson is a surprisingly unscientific guy. He was first-rate at cutting into brains and making repairs, but once you get him outside the operating theater, he comes off a bit clueless, really. He rejects evolution and climate science, because he happens to know better than to believe those lies. Now, some new video has surfaced of a 2011 talk that Carson gave to a Seventh Day Adventist meeting in which he explains that the Big Bang is merely a "fairy tale" and that the theory of evolution is an actual tool of the devil. Sounds exciting! Let's see what we can learn from this great man of medicine.

Much of the talk is the standard creationist turd, given extra polish by the fact that Ben Carson is a brilliant neurosurgeon who has done some digging around in brains, and so he knows just from looking at them that brains are far too complex to have just happened without a Divine plan. After describing the complex neural and muscular operations involved just in the brain's sending a signal to raise your hand, Carson exclaims, "And someone wants to tell me that that came from a slime pit with a bunch of promiscuous biochemicals? Give me a break! That really stretches the limits of credulity.” That's how science works: you look at a biological structure, think about whether you think it could have happened without God, and then decide that He must have designed it. Why more universities haven't realized this is a mystery to us -- it would really cut down on the cost of textbooks.

Here's Carson explaining why the theory of the Horrendous Space Kablooie has to be bunk:

I find the big bang really quite fascinating. I mean, here you have all these high-faluting scientists and they’re saying it was this gigantic explosion and everything came into perfect order. Now these are the same scientists that go around touting the second law of thermodynamics, which is entropy, which says that things move toward a state of disorganization.

Oh, dear, points off already! First off, we're no astrophysicists, but we're pretty sure you wouldn't find many of them describing the universe as being a place of "perfect order" -- sure, there are physical laws that make things predictable, but there's also a hell of a lot of stuff crashing into other stuff, galaxies colliding, and the like. This may all depend on how you're defining "order," of course. And our lay understanding of the Second Law of Thermodynamics is that it only says that eventually, in a closed system, things eventually will fall apart -- which isn't a problem for the universe yet, since as far as we know we've got a few hundred billion years to go before the heat death of the whole shebang. Ah, but Carson's only getting started with the goofy now -- somewhere, he seems to have gotten the idea that mainstream science thinks there have been multiple Big Bangs -- a bunch of test Bangs before the universe got it right:

So now you’re gonna have this big explosion and everything becomes perfectly organized and when you ask them about it they say, "Well we can explain this, based on probability theory, because if there’s enough big explosions, over a long period of time, billions and billions of years, one of them will be the perfect explosion.” So I say what you’re telling me is if I blow a hurricane through a junkyard enough times over billions and billions of years, eventually after one of those hurricanes there will be a 747 fully loaded and ready to fly.

Oh goody. The 747 in a junkyard fallacy. He's not even trying now. Carson concludes that the Big Bang has to be nonsense, because gravity works and comets travel in predictable orbits: “Now that type of organization to just come out of an explosion? I mean, you want to talk about fairy tales, that is amazing.”

Remember, this man believes himself to be qualified to be President of the United States. But sure, let's toss out science because it's hard to believe, especially if you have a book that says everything got poofed into existence -- twice, if you read Genesis closely -- by an invisible guy in the sky. This is actually perfectly scientific, because The Book says it's so.

In another part of the talk, Carson says that Charles Darwin came up with the theory of evolution through natural selection when Satan whispered the whole thing into his ear. Considering that Ben Carson also believes that God gave him the answers to a chemistry final exam in a dream, it's not difficult to see that he really believes that the devil literally co-authored Darwin's work.

I personally believe that this theory that Darwin came up with was something that was encouraged by the adversary, and it has become what is scientifically, politically correct. Amazingly, there are a significant number of scientists who do not believe it but they’re afraid to say anything.

Ah, yes, the evil evolutionist conspiracy to silence critics of evolution, largely through insisting on evidence. Peer review is so unfair, because it doesn't accept "this organ is really complex so it couldn't possibly have evolved" as actual science. Carson told the crowd, with a little giggle, that he was planning on writing a book to be called "The Organ of Species -- not the Origin of Species, the Organ of Species!" Ah, we see -- it is a pune, or play on words! In this book, he planned to "talk about the organs of the body and how they completely refute evolution and several other things as well." We double-checked at Amazon and it's not there, so we guess he's still in the drafting phase on that one. This is a huge disappointment, if only because we were hoping to find out what other stuff our organs disprove, beyond mere evolution. Perhaps we'll just have to wait on that book until after President Carson has served his two terms.

Our guess is that he'll find the time to get back to it a lot sooner than that, though.