Ben Carson Promises To Bathe In The Blood Of Innocents 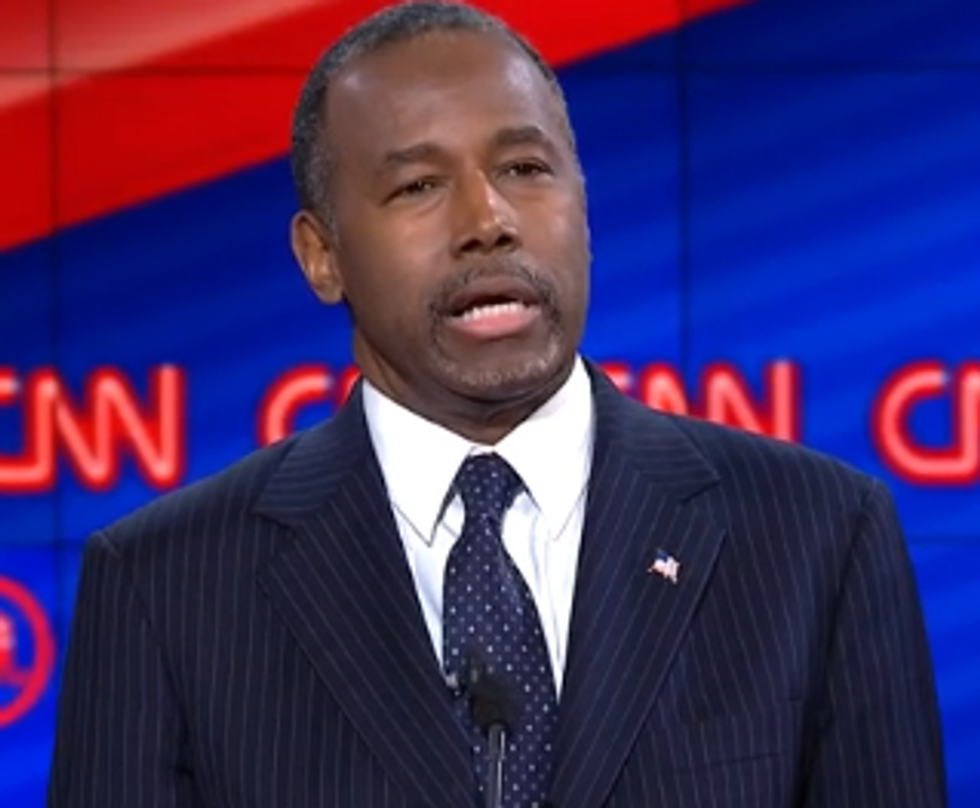 This will only hurt a little bit.

As we all know, Ben Carson is the smartest, bestest brain surgeon in the whole United States of Earth, and this is why he will be the best president ever. At least, that seems to be his argument. Wonkette is suspicious of the entire premise, of course, because we very much believe something happened to him, somewhere between God giving him the answers on his chemistry final and now, that broked his brain. We also are highly skeptical of any human being who, finding herself in the throes of a life-threatening brain tumor, saw the feller above walk into the hospital room and thought, "Oh boy! That's the guy I want tinkering around in my upstairs parts!"

But Carson explained in Tuesday night's Republican debate that it's that very brainy expertise (and bedside manner, it seems) that will allow him to murder innocent Middle Eastern children in their sleep with bombs:

HUGH HEWITT: Could you order air strikes that would kill innocent children by not the scores, but the hundreds and the thousands? Could you wage war as a commander-in-chief?

CARSON: Well, interestingly enough, you should see the eyes of some of those children when I say to them we're going to have to open your head up and take out this tumor. They're not happy about it, believe me. And they don't like me very much at that point. But later on, they love me. [...]

[L]ater on, you know, they really realize what's going on. And by the same token, you have to be able to look at the big picture and understand that it's actually merciful if you go ahead and finish the job, rather than death by 1,000 pricks.

Likewise, you should see the eyes of those little kids, who will be like, "It's Ben Carson, OH FUCK! And instead of scalpels, he has bombs!" But they will just have to trust the good doctor when he says they'll love him later FOR MURDERING THEIR CHILD BODIES.

For God's sake, he talks about being "merciful" like we're putting down a suffering dog, as opposed to an innocent human child. THIS is Carson's argument, FOR REAL?

HEWITT: So you are OK with the deaths of thousands of innocent children and civilian? It's like...

And the crowd went APESHIT booing, because obviously Carson was just WAY ACROSS THE LINE WITH THAT ONE. Killing thousands of babies? No thanks, psychopath! Haha just kidding, they were booing because Hugh Hewitt wasn't being bloodthirsty enough, because Republican primary voters are fucking pigs.

Now to be fair to the "good" doctor, other candidates were figuratively jacking off into the blood of innocents during the debate too, all competing to see who had the biggest dick, and who could shoot his (OR HER) hate spooge the furthest. Notably, Donald Trump doubled down on his suggestion that he'd murder all the families of suspected terrorists, including, presumably, the innocent (American hero!) brother of San Bernardino Syed Farook.

So sleepy Ben Carson had to once again prove that, despite all appearances, he is big and tough. After all, he's the guy who stabbed a man just to watch him die, right? He's the guy who beated up a robber at the Popeyes Organization, just by telling the robber to shoot somebody else! He's the guy who bumrushed the Oregon shooter AND all the Nazis, in his tough guy sex fantasies! He remembers it like it was next Tuesday!

He's got this, is what he is saying. Murdering kids with bombs is easy-peasy, just like brain surgery. You bet.