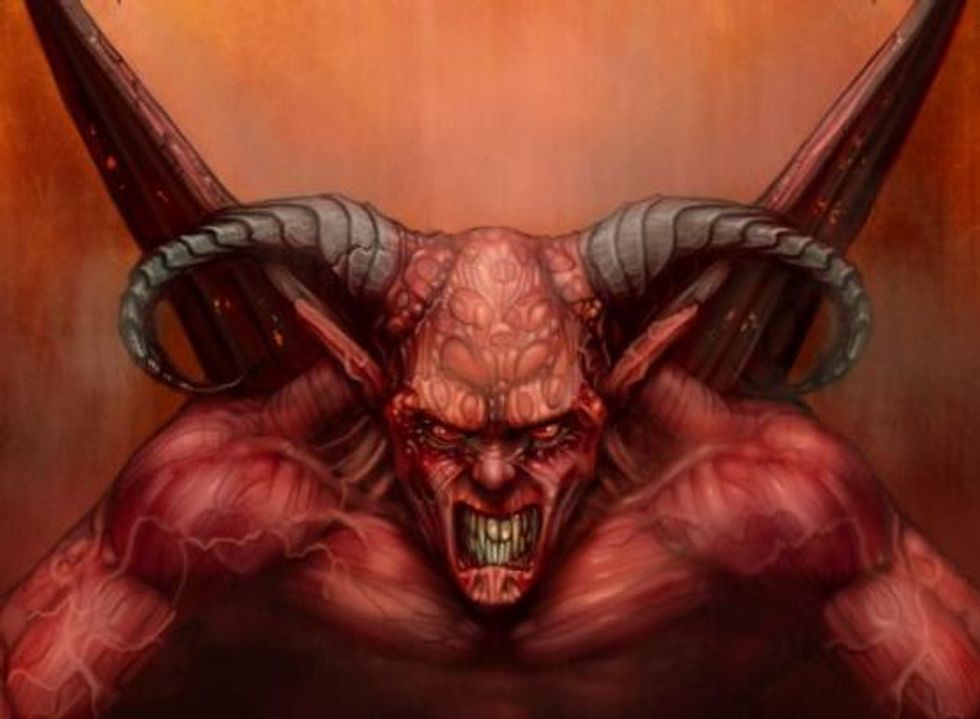 Chris Christie's "Let's Put Hillary in Jail" speech at the Republican National Convention Tuesday was the most fiery, pump-up-The Base speech of the evening -- which was supposed to be all about economic issues, if you recall, as long as if by "economy" you mean "one speech about coal." But it lacked one kind of fire that was later provided by Sleepy Ben Carson: HELLFIRE, of the very literal kind, because as everyone knows, Hillary Clinton wrote her senior thesis at Wellesley about Saul Alinsky, who said nice things about the Father of Lies -- no, not Donald Trump, LUCIFER! Here, watch Carson go off-script at about the four-minute mark. This will be on the test:

One of the things that I have learned about Hillary Clinton is that one of her heroes, her mentors, was Saul Alinsky. (boos) And her senior thesis was about Saul Alinsky. This was someone she greatly admired and that affected all of her philosophy subsequently.

We have never read Saul Alinsky. We're pretty certain that, thanks to Tea Party thought leaders like Glenn Beck, the late (murdered? Probably!!!) Andrew Breitbart, Dinesh D'Souza, and of course Ben Carson himself, more rightwingers have heard of Alinsky as the demon who drives all leftish thought than actual liberals have. Vox has a nice explainerer on who the guy was. But if you really want a shibboleth that will separate the true Teabagger believers from the pretenders, just mention "Saul Alinsky" and watch them recoil in horror as if you'd said you enjoy roast fetus chunks as a snack before you go out seizing guns from patriots. That was exactly the reaction Carson got from the RNC. Some delicate souls may even have fainted at the name. Teabaggers seem to think liberals all swear an oath to Alinsky and venerate his 1971 book Rules for Radicals in dark moonlit ceremonies. In any case, here's why we have to know about Alinsky, Carson explained:

Now interestingly enough, let me tell you something about Saul Alinsky: He wrote a book called Rules for Radicals. It acknowledges Lucifer, the original radical who gained his own kingdom. Now think about that.

And it's true! Except of course it's a little open to question just which Lucifer Alinsky dedicated his book to: The real, flesh and blood Lucifer, who presides over a very literal Hell (which when we were five years old we were pretty sure was located in the furnace in our Catholic church's basement), or maybe the literary figure of Lucifer, who was a far more interesting character in Paradise Lost than that milquetoast Jesus guy. More on that in a moment; let's hear another thing Ben Carson knows about the Clinton:

This is our nation where our founding document, the Declaration of Independence, talks about certain inalienable rights that come from our creator, a nation where our Pledge of Allegiance says we are "One nation under God." This is a nation where every coin in our pockets and every bill in our wallet says, "In God We Trust." So are we willing to elect someone as president who has as their role model somebody who acknowledges Lucifer? Think about that."

Wow, that's one compelling argument! We thought about it, and decided, once again, that Ben Carson is one weird dude. We thought about looking at some fact checking on Hillary Clinton and her probable worship of Satan, via Alinsky. First off, there's that dedication in Rules for Radicals, which Politifact notes really does exist (they also found a freebie online copy of the book, if you want to see what the fuss is about; to get your very own softcover copy, made from 10 percent genuine burned flags, spit wiped from returning veterans' faces, and fetus parts, use our Wonket Linky). So what exactly does that terrible dedication say? First off, it's one of three dedications; the other two are to Rabbi Hillel and Thomas Paine, both known trouble-makers, the latter a man who committed High Treason against the King of England. At the risk of damning yourself for all eternity, here's the dedication:

"Lest we forget at least an over-the-shoulder acknowledgment to the very first radical: from all our legends, mythology, and history (and who is to know where mythology leaves off and history begins -- or which is which), the first radical known to man who rebelled against the establishment and did it so effectively that he at least won his own kingdom -- Lucifer.

You know, we really do think he's talking about the literary character, and just possibly trolling Christians, like any good radical in the early '70s might. It seems entirely possible to us that Alinsky didn't think the Devil was real, which is probably extra scary to your Ben Carsons. Or as Politifact primly puts it,

The epigraph strikes us as more of a provocative literary comment rather than direct advocacy for satanism. Alinsky seems to be acknowledging Lucifer only in a figurative sense, rather than a religious or devotional sense.

You don't say! But, but, isn't the book all about bowing down to suck the greasy cock of the Dark Lord? Don't be silly -- you're thinking of Harry Potter.

As for Hillary, Politifact is again a total buzzkill, noting that while she did indeed write about Alinsky for her senior thesis, she disagreed with one of his key points: Where he said social change can only be driven from outside the system, Hillary, who wanted to be a lawyer, thought working within the established order -- with God on its money and all -- was the better strategy. Or as she wrote in her memoir 2003 Living History:

I agreed with some of Alinsky's ideas, particularly the value of empowering people to help themselves. But we had a fundamental disagreement. He believed you could change the system only from the outside. I didn't. Later, he offered me the chance to work with him when I graduated from college, and he was disappointed that I decided instead to go to law school. Alinsky said I would be wasting my time, but my decision was an expression of my belief that the system could be changed from within.

Or so Hillary wants us to believe. You know how we Lucifer-worshiping Alinskyites lie all the time, since we don't have a moral code. Oh shit, typed that out loud. Never mind. You saw nothing.