Ben Carson Says ISIS Pretty Much Like American Founders, Except Maybe For The Wigs 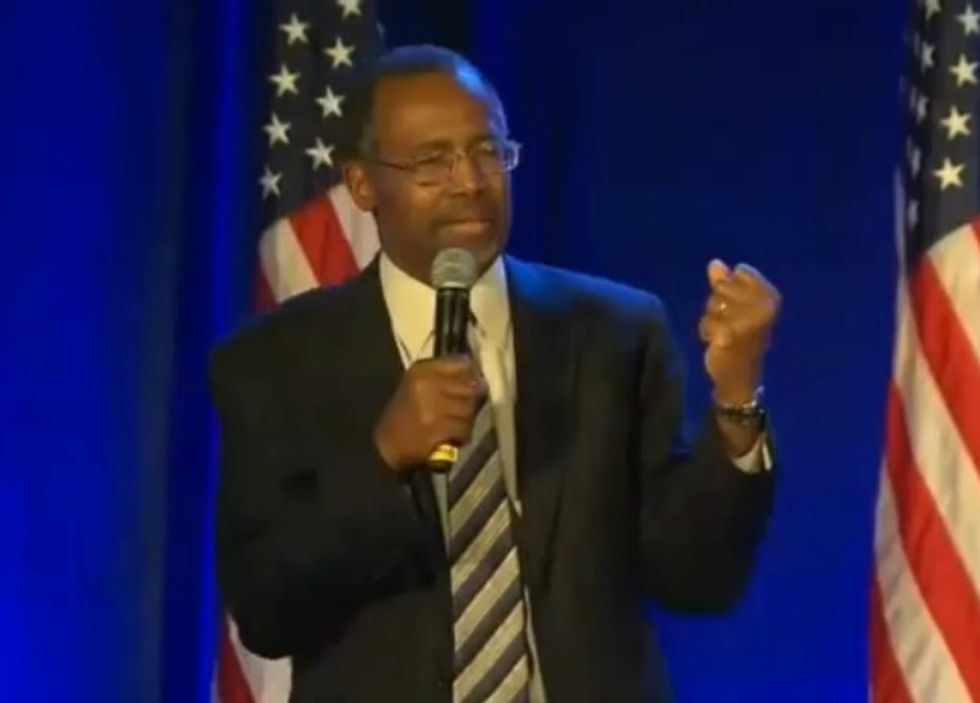 Speaking at the Republican National Committee's winter meeting Thursday, Ben "I Am TOO A Serious Contender" Carson did one of those "Ben Carson says something crazy" things that we know and love so well, comparing the terrorists of ISIS to America's Founding Fathers. But don't you go thinking he's nuts or anything, because he is not.

"A bunch of rag tag militiamen defeated the most powerful and professional military force on the planet. Why? Because they believed in what they were doing. They were willing to die for what they believed in," Carson told a luncheon audience of national committee members. "Fast forward to today. What do we have? You've got ISIS. They've got the wrong philosophy, but they're willing to die for it while we are busily giving away every belief and every value for the sake of political correctness. We have to change that."

Say what you will about the ideology of the Islamic State, Dude, at least it's an ideology.

Now, you see, Carson is not saying that ISIS is like the American Revolutionaries in any other way, except insofar as they were willing to die for what they believe in, a depth of commitment for which ISIS was the only exemplar that came to mind. Or maybe he was suggesting that America and/or the Iraqi and Syrian governments are the British in this analogy, since, like King George III, our president suffers from acute intermittent porphyria and is obsessed with his stools. Or something like that.

Carson was quick to warn the media not to call him crazy again, because apparently he is aware he's getting a reputation for being entertainingly nutso:

Now I recognize that there's press here and some of the press will say, 'Carson said that ISIS is the same as the United States,'" he said. "They are just so ridiculous, so ridiculous."

That's a fair call. On the other hand, if you think the most salient point of comparison between ISIS and the supporters of the American Revolution is that they were both willing to die for what they believed in, then you are merely stupid, not crazy, because that's true of pretty much every nationalist or revolutionary who ever lived, with the exception of the spectacularly unsuccessful "Cowards' Uprising" of 1743.

"I think what he was saying basically was that you have to believe in what you stand for, and that we have to believe in the ideals of America, I didn't think anything odd of it," he said. "I think he was making a point, and I think his point was to stand up for the things that you believe in."

Then again, someone who wasn't trying out for the Clumsy Analogy Team might have used the marchers at Selma as avatars of people who stood up for what they believed in, maybe.

Carson went on to defend other instances where his charming penchant for just making a point also got completely twisted out of context, like how he didn't mean that the U.S. Government is like Nazi Germany when he said American political institutions are "very much like Nazi Germany. You had the government using its tools to intimidate the population. We now live in a society where people are afraid to say what they actually believe.” See? Totally different.

He also angrily denied that he had equated homosexuality with pedophilia and bestiality, just because he said to Sean Hannity in 2013:

Marriage is between a man and a woman. It's a well-established, fundamental pillar of society and no group, be they gays, be they NAMBLA, be they people who believe in bestiality -- it doesn't matter what they are, they don't get to change the definition.

Look, he named those three groups in a parallel sentence, but he never said they were the same thing, you haters.

Finally, Carson just wants to remind you that he never ever said another thing, not ever:

"Every time the liberal press does something about me, they say, 'He's the one who said Obamacare was worse than slavery,'" he said. "I never said that. I said it’s the worse thing since slavery."

Totally different. Of course, as Margaret Hartman points out, Carson didclarify that Obamacare actually is "slavery in a way because it is making all of us subservient to the government," so there's that. But not worse than.

So don't you go around misquoting Ben Carson. He's like a complete moron, only smarter. In a way. His own very special way.