Ben Carson Shilled Scam AIDS And Cancer Cures For 10 Years, Will Be Your Next President Obvs 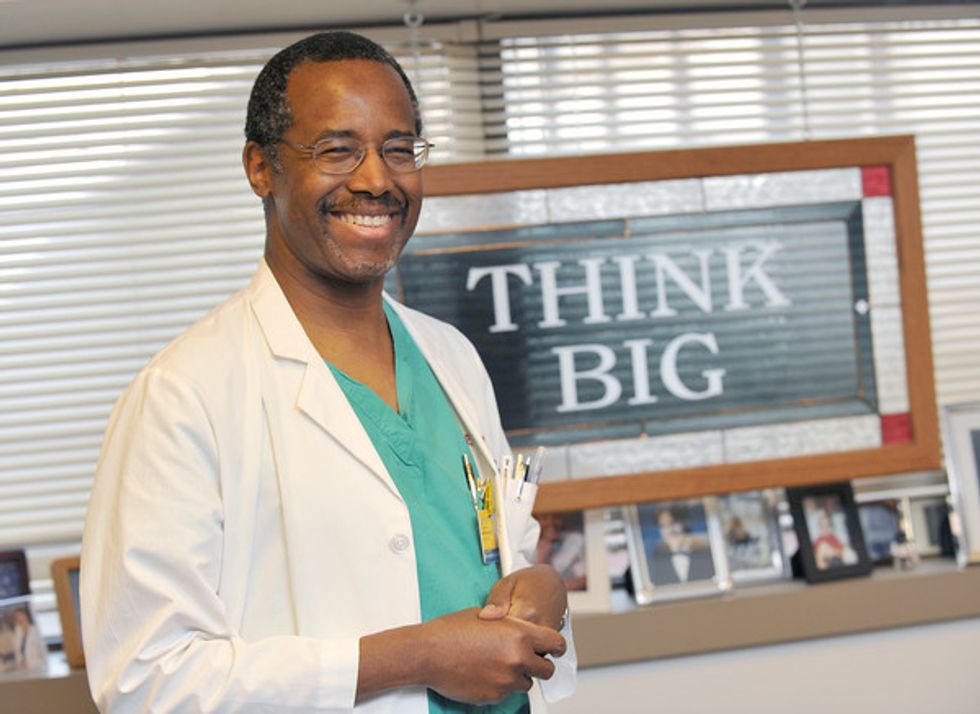 Just how much clownery do you need to completely obliterate the good will you built up from starting a foundation to do brain surgery for poor kids? How much pure nonsense does a trailblazing brain surgeon need to peddle to convince the world that he is venal and/or not very smart? Dr. Ben Carson, 2016 GOP presidential nomination hopeful/flirt, isn't entirely sure, but being a student of the scientific method, he is apparently extremely determined to find out.

Apparently our man Dr. Carson has shilled modern snake oil nutritional supplement company Mannatech (yes, manna-tech, they wanted the religious overtones of naming it after the miraculous God-bread that fell from the sky in the Old Testament, combined with, y'know, modern science and technology). What's wrong with Mannatech? That's a good question, one that our best buddies over at the National Review have answered:

In 2007, three years after Carson’s first dealings with Mannatech, Texas attorney general Greg Abbott sued the company and Caster, charging them with orchestrating an unlawful marketing scheme that exaggerated their products’ health benefits. The original petition in that case paints an ugly picture of Mannatech’s marketing practices. It charges that the company offered testimonials from individuals claiming that they’d used Mannatech products to overcome serious diseases and ailments, including autism, non-Hodgkins lymphoma, and life-threatening heart conditions.

Separately, the suit alleges that the company sold a CD entitled “Back from the Brink” that “provided example after example of how ‘glyconutrients’ (i.e., Mannatech’s products) cured, treated, or mitigated diseases including but not limited to toxic shock syndrome, heart failure, asthma, arthritis, Lou Gehrig’s Disease, Attention Deficit Disorder, and lung inflammation.”

Needless to say, Mannatech products can't actually cure any of these diseases, nor can they cure AIDS or cancer, as the company also has suggested. But their intentionally deceptive advertising and aggressively unscientific attempts to dupe the gullible and desperate did not, apparently, dissuade Carson from advocating for Mannatech and their products in both a compensated and uncompensated basis over a period of about 10 years, even after the company faced lawsuits over its behavior.

Carson’s interactions with Mannatech, a nutritional-supplement company based in suburban Dallas, date back to 2004, when he was a speaker at the company’s annual conferences, MannaFest and MannaQuest. He also spoke at Mannatech conferences in 2011 and 2013, and spoke about “glyconutrients” in a PBS special as recently as last year.

Carson's MannaQuest to MannaBless Mannatech's most recent feat was an appearance in a promotional video on Mannatech's website, giving a testimonial about how he began to feel "different" after buying and using Mannatech products, placing their importance on the same plane with getting a good night's rest and eating healthy food. If you have a passion for infomercials and their pleasantly soporific and slightly sinister blend of natural light photography and genreless mall music, you can watch that below.

The whole thing is pretty embarrassing, and culminates in this embarrassing coda, in which Carson suggests that Mannatech is the key to achieving the original diet handed down to us by God in the Garden of Eden.

The wonderful thing about a company like Mannatech is that they recognize that when God made us, He gave us the right fuel. And that fuel was the right kind of healthy food. You know we live in a society that is very sophisticated, and sometimes we’re not able to achieve the original diet. And we have to alter our diet to fit our lifestyle. Many of the natural things are not included in our diet. Basically what the company is doing is trying to find a way to restore natural diet as a medicine or as a mechanism for maintaining health.

Look, Ben Carson is perfectly within his rights as an American and as a human being to take advantage of the placebo effects of scam unscience, and we do not begrudge him this right. But he's smart enough to know that when Mannatech asks him to speak, they are not asking him to speak as just any American -- they are using him for his unassailable credentials as Dr. Ben Carson, literal brain surgeon, Presidential Medal of Freedom winner, and member of the prestigious National Academy of Sciences’ Institute of Medicine. He was either being irresponsibly negligent or flatly corrupt when he allowed himself to be used in this, uh, MannaManner. Stay MannaBlessed.