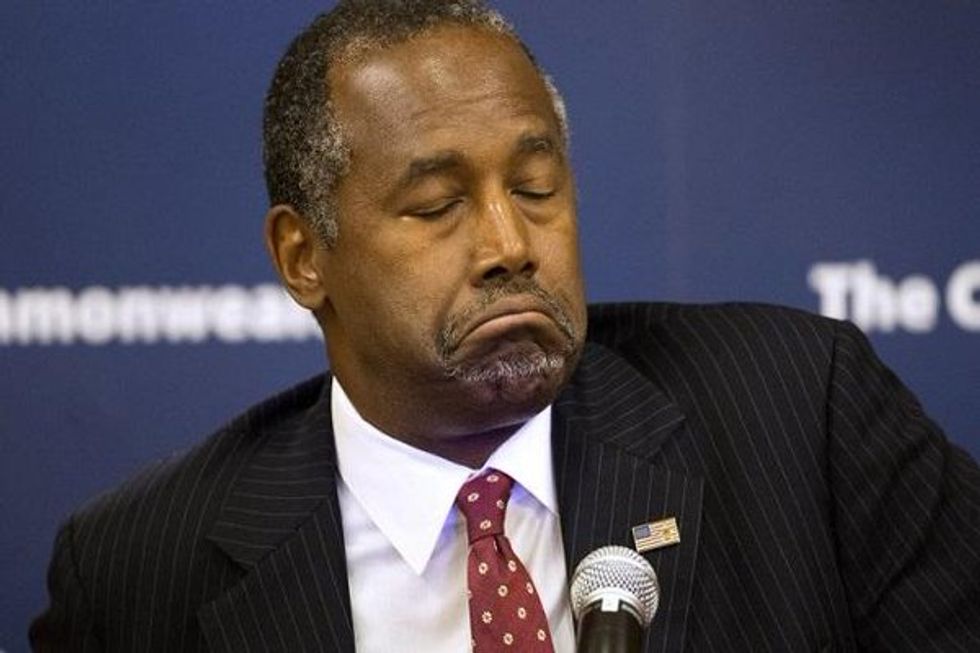 keep running? sure, why not.

[contextly_sidebar id="vmbAlAl3SmXEnndJOgeVEdgDiORXlJT8"]Oh, to have the utter confidence of Ben Carson. This is a confidence that surpasseth understanding. It is a confidence completely unrelated to any external indicators. In short, it is a confidence completely divorced from reality. You may remember that Ol' Ben finished something like eleventieth in New Hampshire. Okay, okay, it was actually eighth, but there's a point below which the numbers are too low to matter. For most people, this dismal showing would warrant, you know, just packing it in. Hell, two people that finished above him -- professional shouty man Chris Christie and job-killer/demon sheep lover extraordinaire Carly Fiorina -- have already bailed out. In fact, the only person Ben Carson beat in the Great State of Granite was Jim Gilmore, an individual we refuse to believe is actually running.

"I think I can win South Carolina. We're going to be putting a lot of time resources and effort here," Carson said.

In case you were wondering how likely an outcome this would be, TPM's Poll Tracker currently has Carson in fifth place with 8.8% of the South Carolina vote. That would sound more impressive until you see that two of the three people below him -- Christie and Fiorina -- are already out of the race.

What has Carlson so very convinced that he is going to win? Is it some really great internal polling? Is it that he feels he has a particular connection to the people of South Carolina? Is it the voices in his head? Time for a sports metaphor from Doctor Ben Carson that will explain it all!

"It's a long race. It's a nine-inning game, we don't call it after the second inning," Carson told MSNBC's "Morning Joe" hosts. "We're going to do just fine and I think South Carolina will be the turning point."

Insightful! Carson's got an equally excellent reason for his utter collapse in New Hampshire: he never wanted to be in that stupid state anyway, you guys, and winning there is for losers.

Carson also downplayed his New Hampshire loss, saying he decided not to focus there on purpose.

"We didn't spend nearly as much money in New Hampshire as many others," Carson said. "We didn't spend anywhere near millions of dollars there, recognizing there were certain things that were going to happen there. So you have to pick your battles very carefully. We're doing just fine, people will continue to support us, we will move forward."

You know, when one is running for President of the entire United States, one tends to need to focus on all the battles, really. However, Ben Carson's incredibly-laid-back-actually-approaching-catatonic state may make actual battling kind of difficult. Let's just hope enough people give Carson money to let him saunter and sleepwalk, substantive-platform-free, through a few more states, because he really is comedy gold.