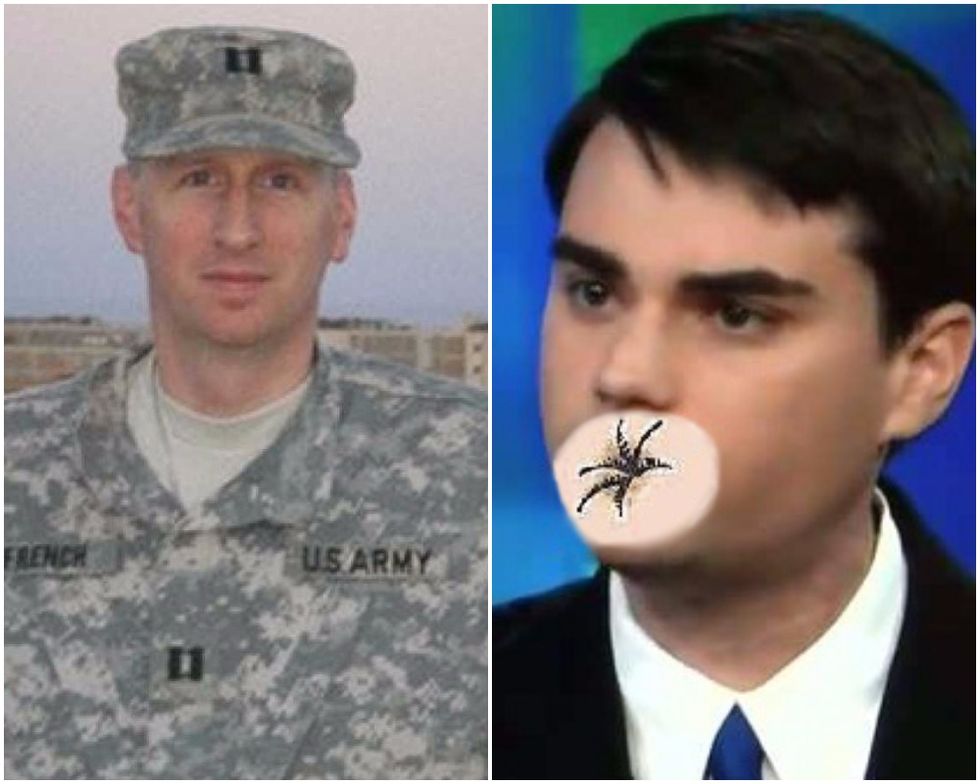 Well, we guess Ben Shapiro, former lover of all things Breitbart, is one of the Renegade Jewishes now, officially, as he is drenching the front part of his bathing suit region with Embarrassment Stains over Bill Kristol's boy wonder independent candidate, David French. (Who?)

No, we 'splained who David French is on Wednesday! He is Bill Kristol's wet dream independent candidate -- who said before the Iowa caucuses that he'd vote for Trump if he was the nominee, but whatever -- who will be supported by ALL the #NeverTrump wingnuts, except the ones like Erick Erickson who are like "Who?" Anyway, Ben Shapiro has a tent in his panties, and its name is "French":

[I]f there’s going to be a third party candidate, nobody would make me happier than David French. French, for those who don’t know him ...

... and very few people outside the conservative movement do ...

... is an excellent thinker, a writer for National Review ...

Ooh, like K-Lo or the wafting shart cloud known as Jonah Goldberg?

... a Harvard Law graduate and constitutional attorney, and an Iraq War veteran ...

Shapiro actually has six reasons (he counted them on his right foot and his left no-no nut) French would be the bestest third party candidate to lose to both Hillary and Trump in November.

The first is that nobody knows who David French is, unlike Trump and Hillary. We guess (?) that's a valid reason.

Second, Shapiro argues that, unlike Trump and Hitlery, David French is honest:

Trumpsters keep saying they like Trump’s honesty, even as he switches positions more often than a Vegas hooker.

David French doesn't constantly switch positions and force Ben Shapiro to get leg cramps. He just throws Ben's legs in the air and pounds away WITH HIS PRINCIPLES.

[wonkbar]<a href="http://wonkette.com/599629/will-tammy-duckworths-robot-feet-kick-mark-kirk-out-of-the-u-s-senate"></a>[/wonkbar]Thirdly, Shapiro lists as a qualification that French served in Iraq, unlike draft dodger Trump and Benghazi-doer Hillary Clinton, so that's awesome. And good for him! This must be why Shapiro is also endorsing Rep. Tulsi Gabbard's re-election and Rep. Tammy Duckworth's Senate run. HAHAHA just kidding, we are not here to poke holes the logic of Shapiro's dumbfuck argument, we are merely here to point and laugh.

Fourth, as we mentioned, Shapiro sees French as a "constitutional scholar," quite unlike Hillary, who only loves the part of the Constitution she wrote on with a sharpie that says "CITIZENS UNITED SUX AND I LIKE TO KILL BABIES."

Oh, and he says it's pretty cool that French and his wife adopted an Ethiopian girl. Agreed, that is very nice!

Sixth and finally, because six is the number of the devil and also the approximate number of seconds it takes Ben Shapiro to climax when he is stricken by a sin stiffie (allegedly), Shapiro likes David French because his name is not Donald Trump or Hillary Clinton, which is kind of a throwaway reason, if you ask us.

He concludes by Googling "French" things, as his starburst cannon peeks through his open fly, rapidly achieving completion:

French still hasn’t said whether he’ll run. And all my criticisms of a third party run still hold here. But if we’re going to have a third party candidate, French would be a terrific option. So, jump on the French roll or become French toast. Maybe it’s time for a French revolution.

And maybe if that happens, Ben Shapiro can French kiss David French while they French braid their hair and eat French dip sandwiches, and maybe they can do French Baton Twirlers to each other before they finally get to French 3rd Base with each other, and OH GOD, OH GOD, OH GOD ...

Shapiro's starburst cannon, having fired off with a powerful "pew pew pew!", retreats back into its shame bunker, until next time somebody whispers "David French" (who?) in his ear.