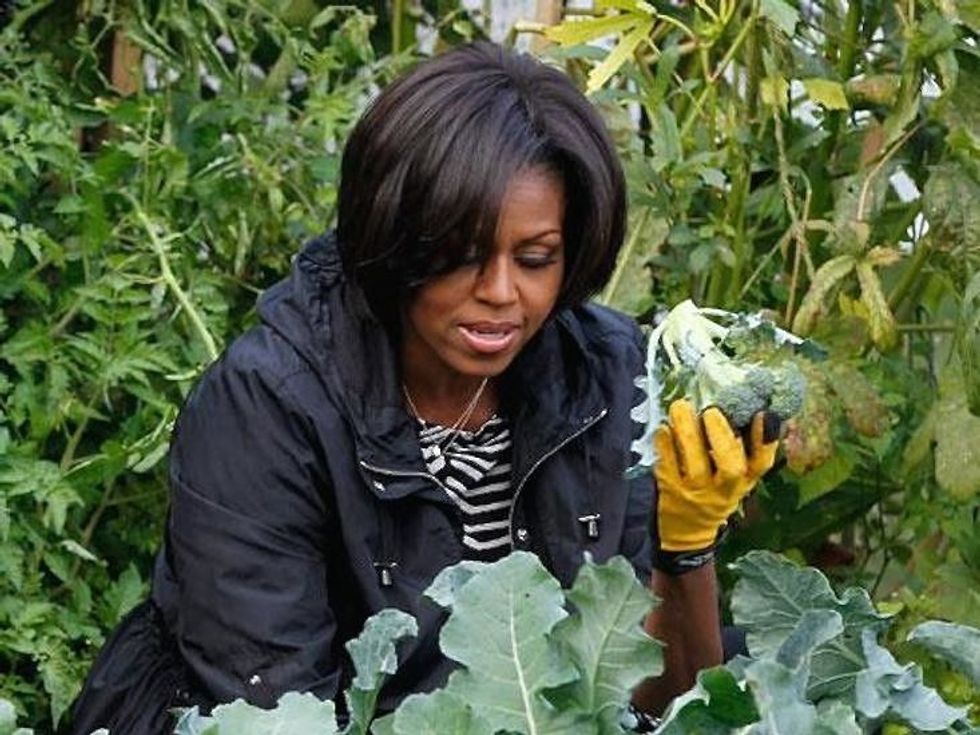 She won't even get her hands dirty

It has come to our attention that a young man on the internet has all the feels for Bernie Sanders. Oh, sorry, we ought to be more specific, oughtn't we? This particular young man enjoys freelance blogging his undying love for Bernie Sanders at a liberal news website. Still need more hints? It is not H.A. "HAHAHAHAHA Oh God Please Stop" Goodman or that other one, whatshisbucket, Walker Bragman.

Please pardon the WTF?! out of us for just a moment to scroll ahead to see if he is joking.

No. He is not joking.

This young man called Michael Sainato offers no examples to prove his assertion that Michelle Obama is "insincere, yet polished" and indistinguishable from the first ladies before her. That might require a full minute of Googling to learn thing one about the country's first African-American (but totally status quo) first lady, and how can a young earnest Sanders supporter be expected to find the time in his busy schedule of drawing "I heart Bernie" on his notebook?

Had he bothered even to read the one link he provided in his own post, he might have learned that Michelle grew up in "a one-bedroom apartment" on the South Side of Chicago -- but the affluent part, we are sure. This daughter of a secretary and a city water plant worker, a descendant of slaves, must have enjoyed quite the pampered upbringing -- unlike her superior, Jane O'Meara Sanders:

She grew up in Brooklyn just blocks away from Bernie Sanders childhood home, worked her way through school while raising a family, until her penchant for political involvement caused her to stumble upon Bernie Sanders, who was then running against six time incumbent mayor of Burlington, Vermont, Gordon Paquette.

While Michelle was gallivanting about at Princeton and then Harvard Law, like a typical black woman who takes her silver-platter privilege for granted, Jane Sanders was giving back to The People as a "community youth organizer for the City of Burlington."

While the first lady has insincerely dedicated her time in the White House to fighting for children's health and fitness, pfffft, when Mrs. Sanders first moved to Washington DC during her husband's first term in Congress, she dedicated herself to important matters, like "working on completing her Ph.D in Sociology as her kids finished high school." That is why, in addition to the many other reasons young master Sainato has plucked from his imagination, Mrs. Sanders stands out from the crowd of identical Stepford first ladies, as "an extension of Bernie's penchant for focusing on the important issues."

To be undeservedly fair to young master Sainato, he does not explicitly draw these comparisons between Michelle and Jane. He simply tosses Mrs. Obama's name into his list -- can you really tell the difference between Michelle and Laura Bush anyway? -- to get to his even more important point that Hillary Clinton sure is the worst.

Clinton hoity-toity-ed at an Ivy League law school as well, and she has spent her career in public service as nothing more than a get-rich-quick scheme. Also, unlike the Sanders' marriage, which is obviously the greatest love story ever told, the Clintons' marriage is "staged, pretentious and predicated on political expediency." Mr. Sainato does not provide an assessment of the Obamas' marriage, but we figure, what with Laura and Michelle and Hillary being indistinguishable, at least to Mr. Sainato, it too is a fake (but polished!) political arrangement.

Does not this great nation deserve, at long last and for the very first time, to have have a likable, relatable average American first family?

Jane O'Meara Sanders, like her husband Bernie Sanders, is relatable to the average American, both Republicans and Democrats.

If we wish for it hard enough, we can overthrow the phony establishment Clinton-Bush-Obama status quo. Yes we can! And finally -- finally! -- we may enjoy the kind of authentic, average American first family from Burlington, Vermont, that Michael Sainato and his equally earnest progressiver-than-thou brethren know we really need to Make America Great Again.