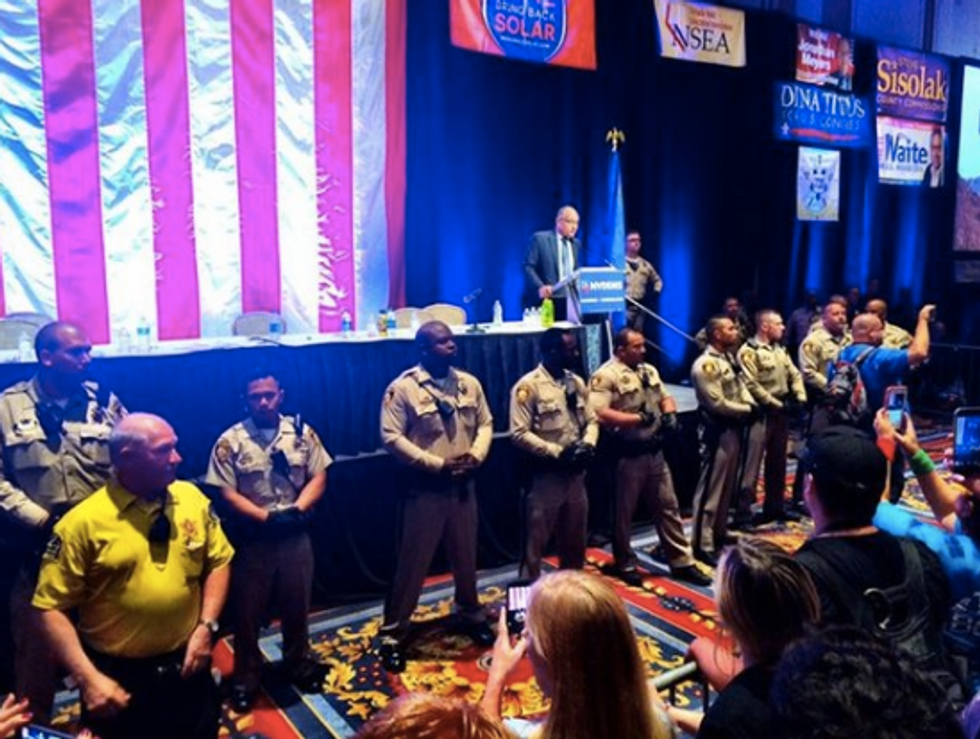 hot cops. You guys know Wonkette is officially neutral in the Democratic primary. Evan and I are bought-and-paid-for neolib corporate piece of shit Hillary shills; Dok and Robyn and Shy are fine upstanding citizens who support Bernie. We don't know who Intern Dominic is backing, but judging by some comments in the chatcave it is whoever can give him the spanking he so richly deserves. (That would be Hillary then.)

the safeword is 'monica'

THEY'RE BOTH GOOD. THEY'RE BOTH FINE. AND NEITHER ONE OF THEM IS GOING TO PICK A REPUBLICAN WOMAN TO BE THEIR VP.

And so you had the images of aggressive, threatening men screaming at children and black women for daring to attend a Hillary rally in East LA, and now you have the Nevada state convention.

After hours spent trying to figure out why Bernie Sanders delegates were screaming that the Democrats had stolen the (Democratic!) convention, we're still a little hazy, and Jon Ralston has yet to weigh in at his blog. But here's what seems to have happened, as near as we can tell.

Hillary Clinton won Nevada's caucuses by almost five points, and both candidates were awarded delegates to the county conventions. Bernie Sanders's delegates out-appeared Hillary Clinton's delegates at the county conventions, where delegates would be awarded for the state convention. (This process is so dumb you guys. So fucking dumb. JUST GIVE THEM THE DELEGATES BASED ON HOW MANY CAUCUS VOTES THEY GOT JESUS H FUCKING CHRIST.) But at the state convention, about an equal number of Hillary Clinton's folks showed up as did Bernie Sanders's. And of the Bernie folks who showed up, sixty had unregistered as Democrats. Whoops that meant they were not allowed to vote at the DEMOCRATIC convention! So fixed! Many corruptions! Oh god I hate everyone.

So then they went insane. They screamed at Barbara Boxer that she was a sellout bitch and did their best to boo the four-foot-nothing liberal grandma lion off the stage. They did their goddamndest to shut the whole thing down, because how is it even kosher for Hillary Clinton to get more delegates just because she won, when they had stolen it fair and square?

The clowns are out look how they're treating @BarbaraBoxer !! #nvdemconvention#nvdemspic.twitter.com/ZiAiG82UZY

Afterwards, they posted the chair's address online, called Barbara Boxer a "neolib witch" -- when did we all become "neolib"? I think when Barack Obama forgot to put all of Congress in Guantanamo -- and probably threatened to primary Elizabeth Warren again, because someone somewhere in the world had the gall not to do what they said, when they said it.

Take a moment, if you please, to imagine the opposite scenario: that Bernie wins the caucus, Hillary supporters show up when Bernie fans don't at some secondary event, and she wins all the delegates. I think we might (rightfully!) have a lake-full of steaming pigshit on our hands. But in this scenario -- the one where reality is happening -- not being able to overturn the democratic results via machine chicanery is, in Bernie supporters' fever dreams, the day democracy died.

At the end of the night, the Paris hotel informed the Democrats they needed to wrap their shit up because there were too many fistfights; the chair adjourned, confirming delegate slates chosen by both campaigns; and according to Twitter this was a super-illegal thing for the chair to do, and everyone is voting Jill Stein now, as if they weren't already.

Anyway, Hillary still only ended up with 20 delegates to Bernie's 15. It's not like he got vote-curb-stomped, which would definitely be against The Rules.

We like Bernie. (At last week's Missoula rally, he took a couple of shots at Hillary, but they were fair shots.) We like almost all of his supporters, including our husband and our baby. (She finds him mesmerizing, mostly, and when we see him on the TV, we explain he is a good man, and he might be president!) (Okay, so at this point he is probably not going to be president, but the statement was still operative at the time.) But the subset of his supporters who think they can get their way through aggression and intimidation is gross, fascist and downright Trumpy -- with the exception that Trump's supporters would have had an election actually stolen from them, instead of attempting to be the stealers themselves.