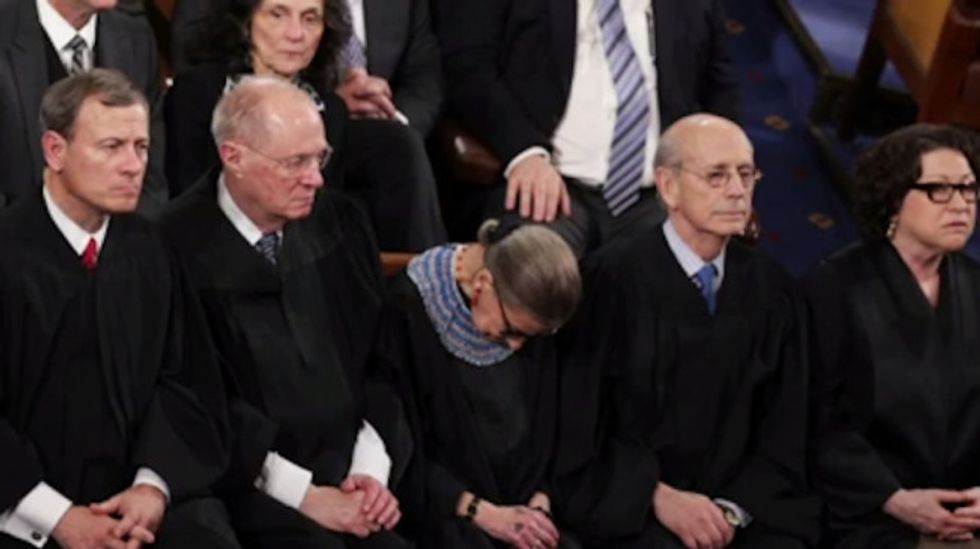 So, here is a thing for your Friday that will make you giggly happy. Ruth Bader Ginsburg, who is a bad-ass, was caught on camera takin' a little snooze during Obummer's State Of The Union address, because who wouldn't, and she admitted Thursday night that she MAY HAVE BEEN a little bit hammered that night, due to she and the other judges always have dinner before the Big Game, and Anthony Kennedy brought some wine she was NOT about to decline:

"The audience for the most part is awake because they're bobbing up and down all the time. And we sit there, stone faced, the sober judges," Ginsburg said. "But we're not, at least I was not, 100 percent sober."

Yeah, gonna go ahead and file this under "Just when you thought you couldn't love her more" and "Supreme Court Justices: They are just like us!" Except Scalia, he's a dork and can't be bothered to come party with his friends, or maybe he really wants to come but every year Ginsburg and the rest (not Clarence Thomas, he's probably not allowed to join in any of the reindeer games either) put a fake restaurant on the Facebook Invite and they're like "Seriously, Tony, no jokes this time, we promise we are going to the Cracker Barrel off the highway, SEE YOU AT 7:00 LOL," and then they all go to the secret kegger RBG has organized for the Cool Justices.

Anyway, so then they all had to get in the Supreme Court Party Bus and go to the UGH BORING State Of The Union and RBG took a little night night that got caught on camera. Good for her. She is, again, a bad-ass, and she can do what she wants.

Apparently she ALSO did this in 2013, which is why she was probably like "PACE YOURSELF, GINSBURG." Talking Points Memo says she was totally going to stick to the sparkling water this year, but whatever, Kennedy had good wine, you don't say no to that. Afterward, she said hi to the Kenyan Muslim, exchanged a knowing smile with Old Handsome Joe Biden, and got back on the party bus with the Cool Justices once again, because everybody knows that once boring State Of The Union speeches are over, it is FIREBALL-THIRTY.

Wonkette would like Justice Ginsburg to know that she is our favorite, and if there is any extra room at next year's SOTU party, we are free that night and will totally BYOB.