Betsy DeVos, Ben Carson Talked To Jesus, Confirm He Hates The Poor And The Sick! 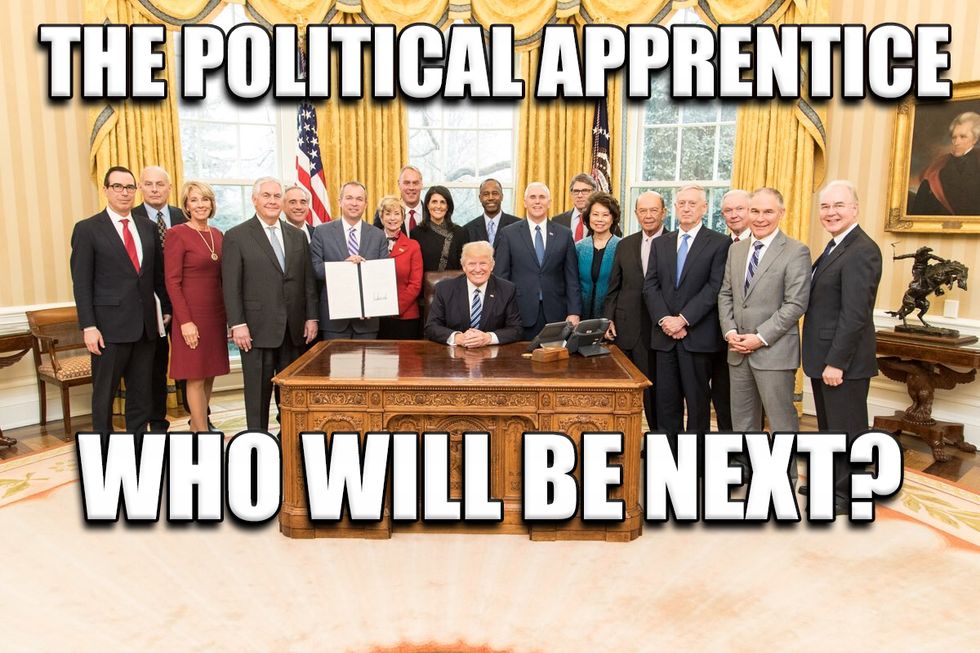 If you, like me, are worried about America's relative levels of greatness given that the whole Trump family excepting Barron has gone overseas, then let me soothe you, because the crack members of the Cabinet are here to save us! Today we are going to hear about how much Betsy DeVos and Ben Carson really understand the plight of the normies, which is what I assume people so wealthy they've gone delusional call the rest of us.

Firstly it is important to note that both these people are in the presidential succession line. So for all you fuckers screaming about impeachment I beg you to consider the ramifications. (I'm not saying don't impeach, but I AM saying be aware of what happens next. My personal theory is that Ben Carson is also a Russian plot, only this one is a slapstick involving the whole country falling asleep during a long speech so the Russkies can bring the Red Dawn Redux to Cupertino.)

[wonkbar][/wonkbar]Anyway, Ben Carson! Our Token Bootstrap Story and also in charge of HUD for some reason, he is what we in poverty policy call "a giant prolapsed sphincter" when it comes to helping anyone ELSE leave the very neighborhoods he escaped by becoming a neurosurgeon and hiring a couple ghostwriters. See, because Ben Carson wasn't helped so much as he couldn't be repressed! Some people just love having their lives suck and you can't stop them from living their worst life! "I think poverty to a large extent is also a state of mind," says the actual certified doctor who does actual brain surgeries but apparently thinks that data is a government plot to undermine the legitimacy of The Secret.

No word on when we can expect Creflo Dollar to unzip the Carson suit for the big reveal, but I can't wait to run into Dollar/Carson personally so I can tell him to shove this bullshit ladder rhetoric up his ass sideways with a grapefruit spoon. It shouldn't need saying, but all the wishes and dreams in the world ain't gonna change the fact that our economy is shifting rapidly to precarious, part-time gigs and it doesn't fucking matter what workers want as long as that's true. But hey, Ben Carson did it which automatically means that he is a Good Sort and also that any Good Sorts can also do everything he did, and also also that if someone doesn't make it it must be because they are a Bad Sort.

Ain't it fun hearing the basics of eugenics argued in this year of our Lord 2017 by one of the nation's top doctors? Are we having fun yet?

But let us not linger too lovingly on the faults of Mr. Pulling The Ladder Up Behind Him! We also have a benevolent wealthy white lady who is here to help all those underprivileged youths who have to go to public school instead of wherever they send rich kids to learn dressage!

See, DeVos is actually an android preprogrammed with certain talking points. We saw her circuitry malfunction during her confirmation hearings when the only thing she was capable of saying to any question for entire minutes was "I believe in accountability."

Now. If your brain processes facts in linear fashion or tries to make new information make sense, you'll need to suspend your higher brain functions right now, else you've no hope of understanding DeVos's argument here. Go find some paint to huff and come back.

Ready? GOOD. HERE IS THE ACTUAL NO-SHIT ARGUMENT FROM THE HEAD OF EDUCATION POLICY IN THESE HERE UNITED STATES. See, "too many children today are trapped in schools that don't work for them. We have to do something different." Which is obviously why we should divert just oodles of money from public schools into a private voucher program.

That accountability she believes in? Well, it means "no oversight." (Accountability here is understood to mean no accountability, which I assume happened because Android DeVos was programmed with a dictionary written by Pat Buchanan and Newt Gingrich.) And what kind of oversight? Oh, just making sure that gay kids are treated like straight kids for purposes of enrollment and that disabled kids aren't discriminated against.

"We cannot allow any parent to feel their child is trapped in a school that isn't meeting his or her unique needs," said DeVos, refusing to say that federal funding was a federal responsibility and demanding that states be allowed to discriminate as they see fit. (Apparently gay people are never children, they are just very tiny homosexuals and parents must be able to send their children to schools without homosexuals! What's more, the GOVERNMENT MUST FUND THIS WITH $1.4B OR YOU HATE JESUS!)

Grosser somehow than being scared of kids who might grow up to have better sex than she does is DeVos's personal commitment to fucking over kids in wheelchairs! See, because one of the groups of kids she thinks shouldn't be forced onto all those fine upstanding educational institutions she wants to fund is: disabled kids. Yes, really. She made it clear during her confirmation hearings that she thinks states ought to be allowed to discriminate against kids with disabilities, because otherwise parents might be uncomfortable with sending little Johnny to class.

Jesus loved the little children and wanted them to be educated on the government dime, because in Republican Bible that verse goes "render unto Caesar that which is Caesar's, and then lie to all of the Roman Empire to take the money back and use it in improper ways to please Old Testament God and also Christians who can't understand their own philosophy." (Republican Bible is the real extended translation.)

So, don't be born poor and if you're dumb enough to do that definitely don't be born gay and everything will be fine for you, amen!

Keep your writers' kids out of the DeVos School Lottery and pay the lady: