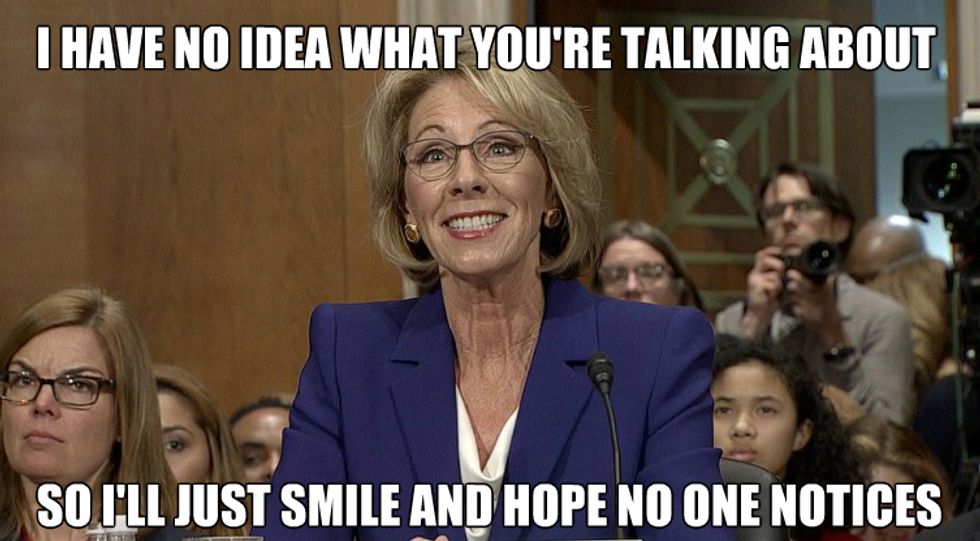 In general, whenever Betsy DeVos does anything in the Department of Education, worrying that things will soon go to shit seems like a perfectly reasonable reaction. This is, after all, the woman who's making life easier for scammy for-profit colleges, getting friendly with folks who aren't sure what rape is, and who loves crappy online schools. So when we saw this Washington Post story about the Education Department rescinding 72 documents meant to clarify education policy for students with disabilities, our first instinct was to say, well OF COURSE DeVos is going to make it easier for schools to fuck over kids with disabilities. The Trump administration wants to eliminate regulations for the sake of eliminating regulations, and with this crowd, it makes sense to be very skeptical of the department's claim that it's simply getting rid of guidance documents that it has deemed "outdated, unnecessary, or ineffective."

The move is all part of the Trump administration's jihad on "burdensome" regulations, of course, in accordance with his executive order asking all federal agencies to proposes regulations for elimination.

The guidance documents spelled out how schools should make sure their practices are in line with the federal Individuals with Disabilities Education Act (IDEA) and the Rehabilitation Act, and were rescinded October 2. We're not inclined to think DeVos has the best interests of kids with disabilities uppermost in her mind, given that during her confirmation hearing she seemed not to even know disability rights are a matter of federal law -- she said it was a matter that was “best left to the states.”

Disability and special education advocates are still working through what -- if anything -- the practical effects of sending the guidances down the Memory Hole might be. Lindsay Jones, of the National Center for Learning Disabilities, told the Post she was concerned about the removal of documents on how schools can use federal special education funding:

“All of these are meant to be very useful … in helping schools and parents understand and fill in with concrete examples the way the law is meant to work when it’s being implemented in various situations,” said Jones.

The Disability Scoop site noted that during the public comment period, "disability advocates broadly opposed the Trump administration’s plan to pare down regulations and guidance."

But over at Education Week, longtime education reporter Christina Samuels, who certainly doesn't sound like a raving rightwing education-hater, seems to think that -- believe it or not -- a lot of these guidance documents really do appear to be outdated and of limited utility. Since DeVos knows nothing, maybe some longtime Education Department folks actually found some genuinely redundant stuff to offer up to the Regulation Reaper:

In all, 63 pieces of guidance from the office for special education programs were identified for elimination, along with 9 documents [from]the Rehabiliation Services Administration, for 72 documents in all.

That sounds like a lot. But it appears that many of the special education guidance documents were targeted because they're just very old. For example, 50 of the guidance documents from OSEP marked for elimination predate the most recent reauthorization of the Individuals with Disabilities Education Act, which was passed in November 2004. One memo, which does not have a link available, is a 35-year-old letter to state chiefs about data collection for fiscal year 1983.

Another document, she notes, is a 2005 memo explaining a one-year grace period in implementing federal guidelines on how public schools provide support for private-school students with disabilities. No need for that grace period anymore.

At "A Day In Our Shoes," a blog for parents of kids with disabilities, Lisa Lightner recommends parents be "concerned but not panicked" and notes that one of the rescinded guidances, on preschool inclusion, had already been superseded by a more recent document. She adds this caution, however, from Ricki Sabia, Senior Education Policy Advisor of the National Down Syndrome Congress:

The biggest issue right now is the process. Mass rescission of guidance documents when we have no idea what they are going after is very dangerous. It may be a long time until we know how much we lost and what we stand to lose as the process goes forward. This is a lot of effort merely to do clean-up work so I am not convinced that nothing substantive will be affected, but I certainly hope that turns out to be the case.

Back at Education Week, Samuels even offers a note of reassurance, noting important limits to the amount of fuckery Trump's executive order can impose:

[Within] special education, there are some pretty important regulations that cannot be eliminated or even substantively modified through this process, because the Individuals with Disabilities Education Act forbids it. Those include regulations related to parental consent to initial evaluation or initial placement in special education, least restrictive environment, timelines, and attendance of evaluation personnel at individualized education program meetings.

Those very substantive regulations were in place prior to July 20, 1983, and the IDEA says they can't be "procedurally or substantively lessened" without "the clear and unequivocal intent of Congress in legislation."

We think we're going to very cautiously start breathing again -- we don't trust Betsy DeVos not to try to screw over kids with disabilities and their families, but this particular pruning of documents might actually be a removal of genuinely outdated material. We'll keep you updated.

In the meantime, you're still fully justified in spitting, cursing, and warding off the Evil Eye whenever you hear Betsy DeVos has announced anything.

[WaPo / Disability Scoop / Education Week / A Day In Our Shoes]