Betsy DeVos Simply Does Not Care To Reply To Your Inquiries, Stupid Peasant Senators! 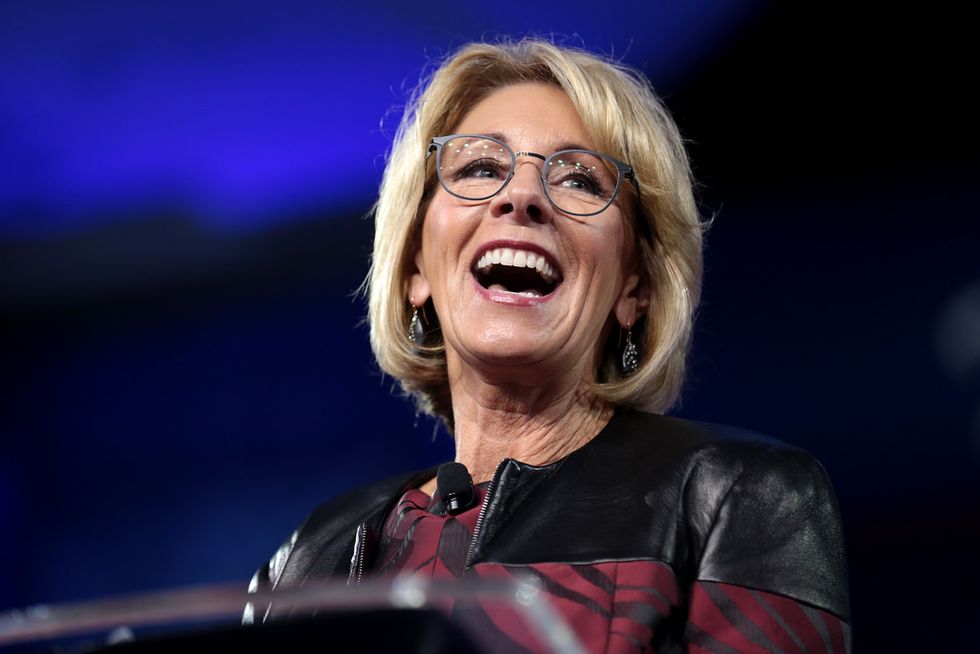 Oh, Betsy! Billionaire heiress Betsy DeVos had no actual experience with the American education system before Donald Trump made her Queen of the Schools. But she had written millions of dollars of checks to private educational institutions. And she'd sat on the board of several charities dedicated to replacing teachers unions with Jesus, as the good lord intended. In her role as benevolent patron, Princess Betsy got used to a certain level of deference from the little people. So, she'll thank those rude Democratic Senators to remember whom they're talking to! How dare they ask her to justify using public money to fund discriminatory religious institutions! Don't they know who she is!

Last week, DeVos sat down with a bunch of men's rights loons to talk about the "epidemic" of false rape allegations. DeVos's acting deputy for civil rights (!) Candice Jackson told the New York Times that the real victims are those poor boys who find themselves falsely accused of rape.

Investigative processes have not been “fairly balanced between the accusing victim and the accused student,” Ms. Jackson argued, and students have been branded rapists “when the facts just don’t back that up.” In most investigations, she said, there’s “not even an accusation that these accused students overrode the will of a young woman.”

“Rather, the accusations — 90 percent of them — fall into the category of ‘we were both drunk,’ ‘we broke up, and six months later I found myself under a Title IX investigation because she just decided that our last sleeping together was not quite right,’” Ms. Jackson said.

In Ms. Jackson's view, Title IX laws were a cudgel used to make a good boy suicidal "because his life and his future were gone, and he was forever branded a rapist." She knows in her gut that civil rights investigators were “specifically told to keep looking until you find the violation,” and that's why those investigations drag out forever. It has nothing whatsoever to do with systemic civil rights violations and the fact that one in four women report being sexually assaulted in college. It's those damn feminists, just trying to ruin the keggers at Pike!

(Ms. Jackson is amazing at PR! If they ever decide to confirm her IRL instead of just having her be acting head of Civil Rights, that Senate hearing is going to be lit!)

Jackson dropped this particular turd into the middle of a dispute between Betsy DeVos and Democratic senators over DeVos's plan to gut civil rights protections in education. The Department of Education has already withdrawn guidance instructing schools to let transgender kids use the damn bathroom like everyone else. And on June 6, Jackson sent a memo to Office of Civil Rights (OCR) Regional Directors telling them, "There's a new sheriff in town, and it's you!" MORE OR LESS.

Going forward, regional investigators will have almost unlimited discretion to dismiss cases relating to transgender discrimination if they feel like boys aren't allowed to wear dresses because it makes Jesus cry. Catherine Lhamon, former head of OCR under Obama, pointed out that that's not how law enforcement works.

That is not an option under the law, and OCR does not have the option to pick and choose the cases it wants to open.

And 34 Democratic senators sent Ol' Betsy a letter warning her that you don't get to ignore some laws because your sky God tells you to.

The meaning of Title IX, and the protections afforded students, should not be left to the individual investigative teams and the preferences of Regional Directors. Put plainly, these actions are inconsistent with the OCR's responsibilities under Title IX and the implementing regulations.

Those rude senators had the unmitigated gall to demand that Betsy DeVos, Princess of Amway, answer a lot of impertinent questions about how she is running the Department of Education. Luckily White House Counsel Don McGahn cooked up a memo saying that Democrats can suck it. So Her Majesty will not be sending those peasants any data. But she did send them a letter on July 11 blessing them with bounty from her unending supply of Righteous Indignation.

Upholding America's civil rights laws is among the most important missions with which the Department is charged; all students must be able to learn in a safe and nurturing environment. Unfortunately, prior to my arrival at the Department, OCR had descended into a pattern of overreaching, of setting out to punish and embarrass institutions, rather than work with them to correct civil rights violations and of ignoring public input prior to issuing new rules.

It was the black guy! He was just out to embarrass those poor rapists!

OCR will no longer ignore its responsibilities to provide notice and the opportunity to provide comments when issuing new rules. The previous Administration too often issued new regulations via administrative fiats using Dear Colleague Letters. Doing so may have been politically expedient, but it deprived the public of meaningful opportunities to provide input.

UH HUH. You just vested unlimited discretionary power in mid-level bureaucrats via an internal memo that only became public because it leaked to the Washington Post. But, please, go on!

Nearly 30 years ago, as a young mother, I saw firsthand the inequities in America's education system and the resulting consequences for too many students and families.

No, just no! Betsy DeVos had no "firsthand" experience with "America's education system" because her four kids never attended public school. Some were tutored at home, and some went to private Christian schools where they were taught that lying is a sin. You do not get to lecture anyone about the inequities in the American school system if you used your money to opt out of it. Bitch, please!

Senator Patty Murray has no time for this trifling nonsense. She responded with a brief letter on July 14 reiterating her questions about how DeVos plans to change policy at the Department of Education and reminding her that she really is accountable to the public.

And now it's all down to the lawyers. Because the only way we find out what these useless sumbitches are up to is when a court to orders them to cough it up or That Idiot tweets about it.

THIS SHIT IS TIRING!

Unlike Princess Betsy, we are not heiresses! Please click to fund our salaries!