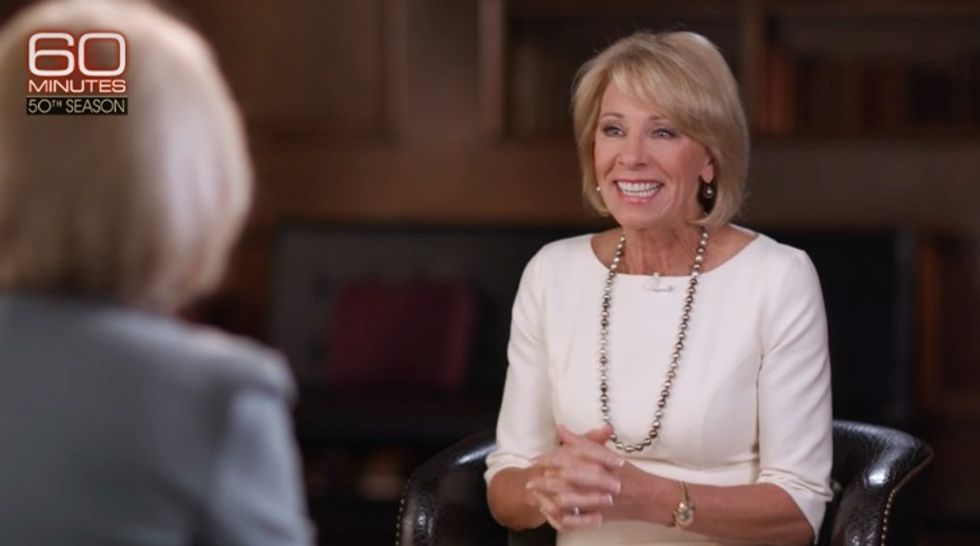 Remember when "60 Minutes" was must-watch TV, when it was known for actually doing tough journamalism, with those interviews where corporate miscreants sweated and lied and gritted their teeth through genuinely compelling interviews? We got a taste of that in Lesley Stahl's interview with Secretary of Education Betsy DeVos Sunday. [Update: looks like the CBS embed didn't work; video available at the 60 Minutes link there -- Dok Z] Unlike too many interviews where public officials just spin out lies to advance their agenda (or get into a shouting match with the interviewer), Stahl very firmly makes clear that DeVos, the billionaire "school choice" advocate who's never worked in a public school (or any school), isn't exactly being honest. Or informed.

Consider this exchange on why DeVos wants to shift billions of dollars from public schools to charters, private schools, or church schools:

Stahl: But that really isn't true. Test scores have gone up over the last 25 years. So why do you keep saying nothing's been accomplished?

DeVos: Well actually, test scores vis-à-vis the rest of the world have not gone up. And we have continued to be middle of the pack at best. That's just not acceptable.

DeVos: But I don't think they have for too many kids. We've stagnated.

It would have been nice if Stahl had pushed even harder, but she at least got at some of the truth: Schools are actually doing better today than in the past, although of course the savage inequalities between rich districts and poor areas are still horrific (and we wish Stahl had gotten into the economic disparities in education, but hell, it's a 13-minute segment). Stahl asks DeVos, fine, so what's the answer to improving education, and DeVos trots out her patented line of school choice flummery:

What can be done about that is empowering parents to make the choices for their kids. Any family that has the economic means and the power to make choices is doing so for their children. Families that don't have the power, that can't decide: "I'm gonna move from this apartment in downtown whatever to the suburb where I think the school is gonna be better for my child," if they don't have that choice – and they are assigned to that school, they are stuck there. I am fighting for the parents who don't have those choices. We need all parents to have those choices.

Thankfully, Stahl doesn't let that go unchallenged either, and pushes back on how the hell taking money from schools that need to improve -- since the money goes with the child to their new chosen charter or private school -- can possibly be a good thing for the kids who are left behind? Devos's reply leaves us whomperjawed. Again, Stahl admirably steers the conversation past the mere spin:

DeVos: Well, we should be funding and investing in students, not in school-- school buildings, not in institutions, not in systems.

Stahl: Okay. But what about the kids who are back at the school that's not working? What about those kids?

DeVos: Well, in places where there have been -- where there is -- a lot of choice that's been introduced -- Florida, for example, the -- studies show that when there's a large number of students that opt to go to a different school or different schools, the traditional public schools actually -- the results get better, as well.

Oh, yes, the old "competition" argument -- move the top students and their share of funding to selective charter/private schools, and then the public schools will have to really improve to win students back. Or maybe they'll just collapse in an unfunded heap, and the remaining students will get vouchers to go to Joe Bob's Charter School Of Last Resort down in the empty strip mall. So if that really works, how about Michigan, where DeVos really got her start tearing up the public schools? Bet the ones that have had their most involved families siphoned away must be improving like crazy, huh? Tell us how that's working, Madame Secretary!

Stahl: Have the public schools in Michigan gotten better?

DeVos: I don't know. Overall, I-- I can't say overall that they have all gotten better.

Stahl: The whole state is not doing well.

DeVos: Well, there are certainly lots of pockets where this-- the students are doing well and--

Stahl: No, but your argument that if you take funds away that the schools will get better, is not working in Michigan where you had a huge impact and influence over the direction of the school system here.

DeVos: I hesitate to talk about all schools in general because schools are made up of individual students attending them.

Professor Elizabeth Warren Grades Betsy DeVos's First Year, Is All Out Of Fs To Give

Oh, say, did you all just hear Maggie Thatcher saying "there's no such thing as society"? Apparently, there are no such things as schools, either. Or if there are, they're really more about individuals, now aren't they, so why even talk about "schools in general"? Mind you, the individual students left behind in public schools aren't doing great, either, but that's their choice, probably. Hey, here's an idea: Instead of spending most of your time visiting model charter and private schools to show them off, maybe you could actually look at the schools where kids don't read good and want to learn to do other stuff good too:

Stahl: Have you seen the really bad schools? Maybe try to figure out what they're doing?

Stahl: Maybe you should.

DeVos: Maybe I should. Yes.

There's plenty more, like DeVos's inability to say why she's so disliked (she thinks "there are a lot of really powerful forces allied against change," and also she's misunderstood), or her fumbling, clueless praise of the student activists from Parkland, Florida:

DeVos: I give a lot of credit to the students there for really raising their voices, and I think that they are not going to let this moment go by.

DeVos: They want a variety of things. They want solutions.

And by golly, DeVos is OK with teachers being armed, even if that's the very last thing the teachers want.

DeVos wasn't even able to wrap her mind around the possibility that schools might systemically discipline minority and white students differently -- again, she insisted it's all about "individual kids," because there are no systems, there is no society, there are only individuals, and if schools send white kids to the principal's office for fighting but have the campus cops arrest black kids, that really comes down to the individual.

Same thing on DeVos's rollback of how campus sexual assault is treated: She wants all accused rapists to be treated fairly, but darned if she knows whether there are more actual rapes than false accusations, because how can anyone know anything in this big mixed-up world of ours?

Stahl: Are you in any way, do you think, suggesting that the number of false accusations are as high as the number of actual rapes or assaults?

Stahl: Yeah, but are they the same?

And she just can't understand why people think she's incompetent. They must all belong to teachers' unions that are afraid of making schools better.