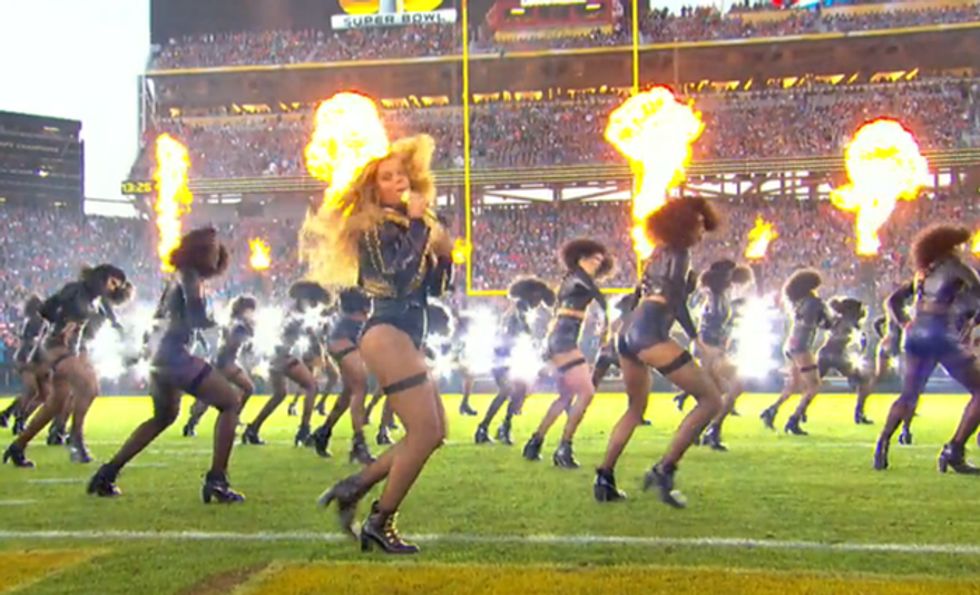 Sunday's Pepsi Super Bowl 50 Halftime Show at Levi's Stadium in Facebook, California, was tinged with controversy. In an astonishing move, the NFL chose Coldplay to headline as an obvious diversity hire. Some more sensitive types were unsettled by the show-rescuing performance by Beyoncé, who was backed up -- or dare we say blacked up -- by dancers wearing costumes evoking the Black Panthers and performing "Formation," a song released just the day before the game, which has all sorts of scary political references to cops killing black people without once mentioning black-on-black violence. Also, for some reason, conservatives just don't like Beyoncé much.

Sorry, did we say "unsettled"? We meant "unhinged." Consider this reaction by rage-fueled harpy Michelle Malkin, tweeted out while Beyoncé was still gyrating (and Coldplay's Chris Martin was leaning waaaay over so Bruno Mars wouldn't look quite so teensy):

Malkin followed that up with a stern finger-shaking at the backup dancers, who should never ever wear afros or berets, because black radicalism is nothing to celebrate, no way, you hussies. The tweet included a link to a perfectly sane and utterly tedious David Horowitz article about how terrible the Black Panthers truly were.

You put those fists down right now, young ladies!

Among other things, Horowitz insists that not only did Huey Newton expel former Panthers chairman Bobby Seale from the party, but Newton was pretty much a psychotic rape monster:

As I learned long afterwards, Seale had been whipped — literally — and then personally sodomized by Huey with such violence that he had to have his anus surgically repaired by a Pacific Heights doctor who was a political supporter of the Panthers.

We won't claim any expertise on the history of the Black Panthers, but a brief bit of searching suggests this claim originated with Horowitz himself; Ward Churchill calls it an unsubstantiated myth, and we are, to say the least, skeptical of virtually any "history" by Mr. Horowitz. Still, the internet is an amazing thing -- you start with a dance routine at the Super Bowl and end up at a crazy claim about Huey Newton.

Needless to say, not everyone was delighted by Malkin's tweet; we rather liked this observation by Fusion's Adam Weinstein, who brought up Malkin's stupid book justifying the internment of Japanese-Americans in WW II and suggesting it would be a great idea for Muslims today:

And this one, by blogger and legal analyst Imani Gandy:

In the interest of full disclosure, we should note that a Chicago Tribune writer replied "I like @michellemalkin," which we can't help hearing in Hans Moleman's voice.

Several internet outlets were delighted by the injection of some political content into the halftime show, because Black History Month doesn't only have to be about George Washington Carver and peanuts. Most viewers probably missed the political connotations altogether, either because they didn't catch the cultural references, or because they were stuck on the toilet with opioid-induced constipation. And of course the Usual Suspects had quite the hissy fit, including Stupidest Man On the Internet Jim Hoft, because the entire dance routine advocated killing cops somehow:

Worse, Hoft pointed out that Beyoncé was returning America to the bad old days of segregation and Jim Crow!

In fact, Beyoncé herself does not include any white girls!

Also, you see, that "Formation" song is, as Dead Breitbart's Refuge For Panicky White People explains, nothing less than a "big wet kiss to Black Lives Matter," because the video features Beyoncé posing on a sinking New Orleans PD patrol car (looters!), a wall with "STOP SHOOTING US" spray-painted on it (vandalism!), a little black kid (Trayvon!) in a hoodie dancing in front of a line of cops in riot gear (Ferguson!), and worst of all, the line of cops raising their hands in the "hands up, don't shoot" gesture even though the Justice Department determined that Michael Brown "did not have his 'hands up' when Officer Wilson fired on him," an unconscionable historical inaccuracy in a music video. Just look at this radical video, which also appears to advocate unsafely doing donuts in a late-'60s El Camino while a pop singer hangs out a window without a seatbelt:

[contextly_sidebar id="WII7RvEQ6uEQ9eunuHEhdokF2XN7l7XF"]As with any cultural controversy, "Fox & Friends" felt compelled to weigh in on the poutrage, with professional cop-defender Rudy Giuliani wondering why Super Bowl halftime shows can't just have nice clean young people like "Hooray For Everything" performing anymore: