Yesterday, the best pollster in the country, Monmouth University, released a new poll of Georgia voters. Monmouth had Donald Trump and Joe Biden tied among registered voters at 47-47, and found Trump up just one point with likely voters at 48-47.

Georgia has become more purple every year, and Trump's high negatives have Democrats looking at the state as a possible pickup. So let's take a deep dive into Monmouth's crosstabs to see if 2020 is the year the Peach State finally turns blue.


Here's the main graphic we'll be referring to. 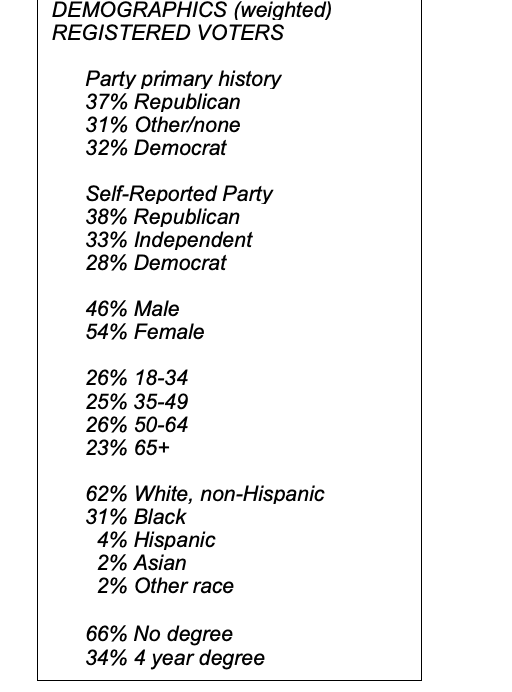 These crosstabs and weighted demographics are very well done, and they probably give us a good picture of the Georgia electorate. But a few things jump out immediately. For instance ...

Why is the third party candidate taking three percent of the vote?

Libertarian Party candidate Jo Jorgenson is supposed to be netting three percent? Really? That's a horseshit number anywhere, let alone in Georgia. Historically, third party candidates do worse in the deep South than the rest of the country. For example, in 1992 Ross Perot netted 18.9 percent of the vote nationally, but in Alabama he got 10.85 percent, in Georgia 13.34 percent, in Mississippi 8.72 percent, and in Louisiana 11.71 percent.

Gary Johnson got exactly three percent of the vote in Georgia. But that year third party candidates as a whole received 4.2 percent of the vote in the state, far below the 5.7 percent national average. Gary Johnson was a two-term governor who benefitted from massive earned media as one of two protest candidates in an election everyone expected Clinton to win. By contrast Jorgenson is a totally unknown professor at Clemson University. NFW she's going to do as well as Johnson did four years ago.

If I had to guess what's going on here, most of the so-called Jorgenson voters in this poll were really undecideds who picked the third-party when pushed by the pollster to just choose someone.

There are a lot of independents, and they're swinging hard for Biden

In 2016, CNN's exit poll found that 30 percent of Georgia voters were independents, a group Trump won 52-41. Nationally, Republican Party affiliation is down, and independents now outnumber registered Republicans. So it makes sense that Monmouth's sample represents a slightly higher proportion of independents than in 2016, up to 33 percent of the respondent pool.

Among this increasingly important group, Biden is leading by 12 points in Georgia, 53-41, a massive swing away from Trump's 2016 numbers. While Obama did well with independents in 2008, there simply weren't enough of them to put him over the top in Georgia. But this year there are a whole lot more of them, and they really don't like the president. Will it be enough for Biden to win Georgia in 2020? That's a solid maybe!

Biden is taking 64 percent of the moderate vote

Georgia is a very conservative state. In 2016, CNN showed 42 percent of the state's voters self-identifying as conservative, compared to only 22 percent who called themselves liberals. This puts Democrats at a disadvantage from the jump, so we have to hit it out of the park with moderates to even be competitive there.

In 2016, Hillary Clinton won moderates 57-38. In most swing states that would be enough to win by a comfortable margin, but that won't cut it in Georgia.

Monmouth has Biden crushing it with moderates, 64-28. If that margin holds up on Election Day, we'll be looking at a one percent margin between Biden and Trump, just like it is in this poll. Will it be enough to put Biden over the top? Who knows! But he's certainly in a much better position than Hillary Clinton was in 2016.

Trump is about as popular as dogshit with women voters. Across the country, women prefer Democrats in general and Biden specifically by wide margins. But Georgia is a bit of an outlier in this metric.

After the 2018 midterms, the national story was about suburban women leaving the Republican Party and handing Democrats 40 House seats. And while that was definitely true in the Rust Belt and places like Miami, Stacey Abrams actually underperformed Hillary Clinton's margin among women, while doing significantly better with men.

This cycle Monmouth shows an oddly symmetrical gender gap, with Trump winning men 52-42, and Biden taking women 52-42. But if we look back to 2016, we find Georgia's men supporting Trump 60-37. Biden's not doing much better with women than Hillary Clinton with women, but he's narrowed the margin among men by 13 percent. That's a very good sign.

All things being equal, in a "regular" election cycle, Democrats will win the 18-49 crowd handily, Republicans will dominate the 50-64 vote, and senior citizens will lean Republican, particularly in the South.

In today's Monmouth poll, though, Biden is tied with Trump at 46-46 among those under 49. But there seems to have been a real sea change with older voters. Among 50-64 year-olds, Trump has a slight 48-46 edge. But Biden is actually winning seniors 52-48.

It's likely that the numbers in November will be closer to the "norm" — we can't realistically expect Biden to do 20 percent better with senior citizens than Hillary Clinton did. But Monmouth's numbers are a good snapshot of how pissed off they are at Trump and the GOP for their handling of COVID-19. Granny is not impressed with 150,000 deaths and the prospect of an entire year locked in her house.

Let's play a drinking game. On election night, every time you hear the phrase "white working class," take a drink. Just kidding, don't do that. YOU WILL DIE.

But the obsession with Democrats' appeal to non-college educated whites is real. In 2016, Hillary Clinton lost this group in Georgia 81-15, an ass-kicking of epic proportions. And Biden is still getting crushed with them 73-22, but that's a substantial improvement over Clinton's numbers. In a razor-thin election, it might make the difference. For Biden to win the state, he needs to do a little better with this group. And oh, hey look, he's actually doing it.

Georgia is looking swingier than ever in 2020. And although Trump is still probably the favorite, Biden has a chance.


Georgia is in play, y'all!

Wonkette is paid for by YOU. We love you. Pay us to keep going please, if you are able!